As the Chinese government reveal plans to close down more of its pulp and paper industry we consider whether the target capacity of 7.42 million tonnes by the end of this year is achievable… or enough.

In late July, the Chinese Ministry of Industry and Information Technology (MIIT), which is directly under the leadership of the State Council and responsible for the development of China’s industrial sector, publicised capacity closure details for 19 industries, including the pulp and paper industry, for 2013. This preliminary announcement included annual capacity of 6.21 million tonnes at 274 companies scheduled to be retired by the end of this year. The second list was released about one month later, adding 1.21 million tonnes of capacity, raising the goal for closing capacity to 7.42 million tonnes. All of the machines on the list were required to stop production by the end of September, and will have to be dismantled by the end of this year.

For the tissue industry, no specific limits have been defined for the speed, width or capacity, but closure requirements of non-wood pulp mills and small fine paper mills also affect tissue production. Many small tissue PMs in China have been fed by non-wood pulp, mill broke from fine paper machines and/or recovered paper. At old Chinese fine paper mills, mill broke was not directed back to the machines, but used separately for feeding a few small tissue PMs located in the corner of the mill complex. With fine paper production closing, tissue production will lose its raw material and be forced to close as well. Also, a number of small straw pulp lines have supplied fibre for tissue PMs and their closures oblige tissue PMs to close because generally the economics of these tissue mills do not allow for market pulp purchases from outside the company.

The raw material base also dictates to a large extent where in China closures take place. The industry along the coastal zone, which uses imported wood pulp, is less affected by the regulations than the old mills using non-wood (mainly straw and reed pulp) and recovered paper in hinterland China. The new closure order also means the end for all recycled fibre-based pulp lines below the capacity of 10,000 tonnes per year, which hits the old and small tissue mills using locally collected recovered paper and further reduces the already surprisingly low recycled fibre use for tissue in China.

We have already seen a lot of tissue capacity closures in recent years. From the beginning of 2008 through September 2013 we have been able to identify more than 1.5 million annual tonnes of capacity closures, and because the recording of closures is normally delayed to some extent, this year is likely to see still more capacity closing than what we currently know. In addition, there have certainly also been mill closures that we cannot identify. In recent years the rate of closures has accelerated, due to the overcapacity situation in the Chinese tissue market and the Chinese authorities’ modernisation programme for the paper industry.

‘From the beginning of 2008 through September 2013 we have been able to identify more than 1.5 million annual tonnes of capacity closures, and this year is likely to see still more capacity closing.’

Looking at the capacity that has closed recently, we can see that the closures have not just hit the smallest and oldest tissue mills. In addition to environmental reasons, there have also been closures due to economic, qualitative and land use reasons. In 2012-2013, a number of larger mills have been shut down, including Shaanxi Aohui Paper (60,000 tonnes per year, environmental reasons), Huizhou Fook Woo Paper (capacity reduction by 36,000 tonnes per year due to ownership change and economic and qualitative reasons), Shanghai Potential Paper (qualitative and economic reasons), Shaanxi XiAn Lintong Hangxing (environmental reasons) and Ningxi Meijie (mill removal order by authorities for land use reasons and capacity reduction by about 50,000 tonnes per year as only the two largest PMs were removed to the new site). In addition, several existing producers have closed their older small tissue PMs after starting up new larger PMs. Good examples of such companies are C&S Paper, Ningxia Bauhinia, Shengda Group Sund Paper and Henan Luohe Yinge.

WHAT THE FUTURE HOLDS

Now the main questions are: will tissue capacity closures continue at the same rate or even accelerate as in the past few years and will these closures substantially reduce the overcapacity? We believe that the Chinese government will still continue its restructuring programme, and there are still a lot of small tissue mills which cannot fill the criteria for environmental protection and/or energy efficiency set by the government, which means that mandatory closures will continue in 2014-2015.

The overcapacity situation and tight competition are likely to cause problems for some existing mills and we are likely to see closures for economic reasons in the coming few years, but it is difficult to estimate how many producers and mills will be hit by competitive troubles. Our estimate is that the closures will probably continue in 2014-2015 at about the same level as in 2012-2013, but it is possible that this is a conservative estimate when looking at the trend since 2008.

But even if closures accelerate from the level of 400,000- 450,000 tonnes per year to 500,000-600,000 tonnes per year, their effect on the demand/supply situation is not decisive and certainly not enough to counterbalance all the new projects coming on stream in the next couple of years. Assuming the 2012-2013 closure rate continues, the current outlook is that the net capacity change will be close to 1.0 million tonnes this year, about 1.5 million tonnes in 2014 and again close to 1.0 million tonnes in 2015. Additional closures could improve the situation, but only marginally. Major project delays and postponements would be needed to really improve the situation. So the ball is in the suppliers’ court, including the largest players with massive investment targets. Neither the Chinese nor the global market can absorb all of the announced capacity, so my message to the Chinese companies is simple: please reconsider your expansion time schedules, otherwise there is a major threat that margins will collapse radically and an otherwise attractive and strongly growing tissue business in China will be ruined by the excessively ambitious growth targets of individual suppliers! 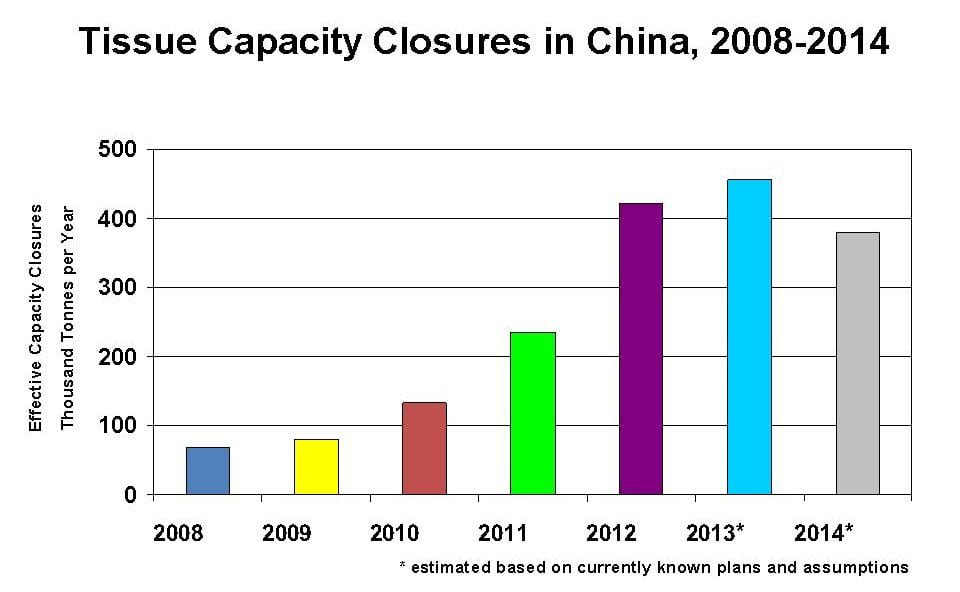 Esko Uutela, principal, tissue, works out of RISI’s EU consulting office close to Munich, Germany, and can be reached at:

Is the slowdown in China a threat for the South East...