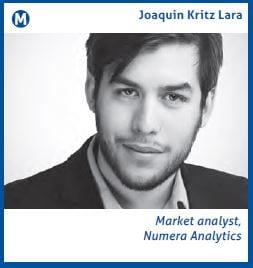 Tissue usage increased 3.6% after a dramatic drop in energy prices in the winter of 2014-2015, plus an improvement in consumer confidence. TWM asked Numera Analytics to explain how it happened … and to look ahead.

Eurozone tissue consumption accelerated sharply over the last year and lower oil prices have a lot to do with it. Our research indicates that any quick rebound in oil prices could reverse these gains if the increase is driven by a perception that oil supply is to be constrained as opposed to being driven by an improving global economy. This is of particular relevance as the Organisation of the Petroleum Exporting Countries (OPEC) try to agree on oil production curtailments.

Over the last 12 months, the Eurozone’s tissue consumption has increased by 3.6%. That is 1.7 points above what could have been expected based on long-term fundamentals. Based on our calculations, some 65% of the 1.7 points in incremental growth was directly the result of the dramatic drop in energy prices in the winter of 2014-2015. The remainder came from a strengthening in domestic macroeconomic factors such as an improvement in consumer confidence. The only negative shock came from slower global economic growth, which the analysis showed reduced tissue demand by 0.7 points. 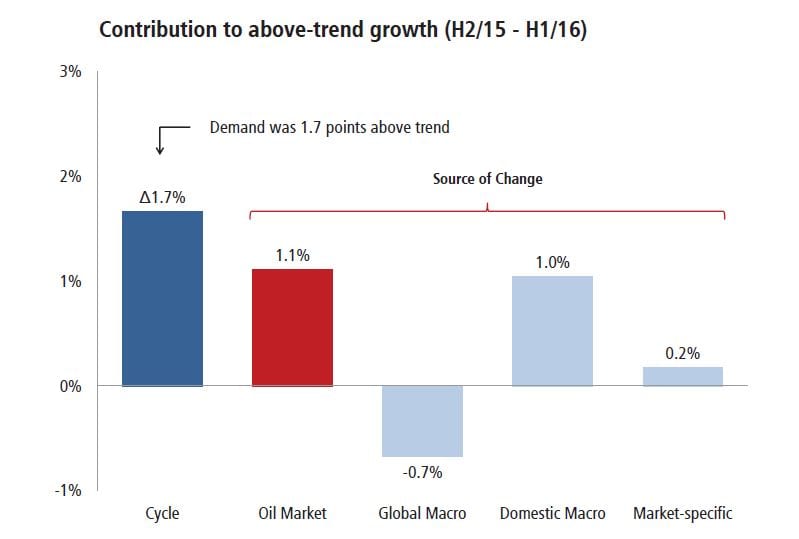 More than two-thirds of converted tissue products (toilet paper, facial, paper towels) are purchased by households in Europe. The balance is consumed in AfH activities. By increasing the amount of discretionary spending households can afford, the large drop in oil prices has been a significant net positive to consumption of goods in general, including tissue (particularly AfH that is closely linked to employment and discretionary spending on hotels, restaurants, etc).

Yet, one may wonder why today’s increase in tissue consumption can still be driven by oil price declines that happened 20 months ago. The answer is that consumer spending takes time to react to a fall in oil prices, even if the pass-through to gasoline prices is very quick.

In fact, the peak response of tissue consumption comes two years after the oil price shock, implying that it will continue to see the benefits through the end of 2016. While our research demonstrates that oil price shocks have a significant effect on the Eurozone’s tissue consumption, the magnitude and direction of the response depends crucially on the nature of the “shock”, economists slang for unexpected change.

If global energy prices decline as a result of factors specific to the oil market (i.e. a shift in oil market sentiment), demand for goods and services in the Eurozone strengthens, thereby increasing tissue consumption.

Conversely, if energy prices fall due to a weaker global economy, the purchasing power gain does not compensate for the detrimental effect of weak external demand on private spending. Real consumption falls, reducing demand for all goods and services, including tissue products.

Importantly, we find that Eurozone tissue demand falls by a similar magnitude when oil prices rise rather than fall. This implies that any spike in oil prices could reverse these gains in the future, unless the price increase is driven by a stronger global economy.

A successful attempt to curb oil production by OPEC countries would come as a surprise to the market, given the stated intentions of countries such as Iran, Libya and Nigeria to increase their oil exports. Looking further out, conflicting forces
are at play. The dramatic decline in capital spending on oil exploration and production over the past two years (the number of active drilling rigs operating globally has dropped nearly 60%) would argue in favour of an eventual oil price increase.

At the same time, however, the standardisation of oil drilling components and other cost-cutting measures are driving down the cost of drilling, leading to additional oil supply to the market. What seems clear is that the next oil shock is likely to come from a shift in market sentiment rather than from a sudden improvement in the global economy. Hence, any rebound in oil prices would have a negative effect on tissue consumption.

Oil price shocks and economic activity: implications for tissue consumption in the Eurozone

Tissue consumption in the Eurozone has grown 3.6% over the past 12 months, compared to a 1.8% increase in real spending on all goods and services. Isolating the cyclical component of tissue demand, we find it grew 1.7% above trend during this  period, the strongest increase in over a decade.

We recently published a research paper where we explored the factors behind this improvement. Because Europe’s economic recovery occurred in conjunction with a sharp decline in global energy prices, we placed specific attention on the role of oil price changes in generating cyclical fluctuations in tissue demand.

Our research shows oil market shocks have played an important role in lifting tissue consumption in the recent past. More precisely, we find that 1.1% of the 1.7% cyclical increase has been triggered by shocks originating in the global oil market.

Because the demand response to global oil shocks is fairly persistent, large price declines in late 2014 and early 2015 continue to influence tissue consumption today. However, while oil demand shocks can have a lasting effect on tissue purchases, their support eventually dies out.

Considering that global energy prices have stabilised in recent months, their contribution will dissipate as the year progresses. Over the next few years, we expect job creation to take the relay in supporting tissue consumption. Broadbased
employment growth, combined with modestly rising wages, will drive tissue consumption in Western Europe up 1.2% per year between 2016 and 2020.