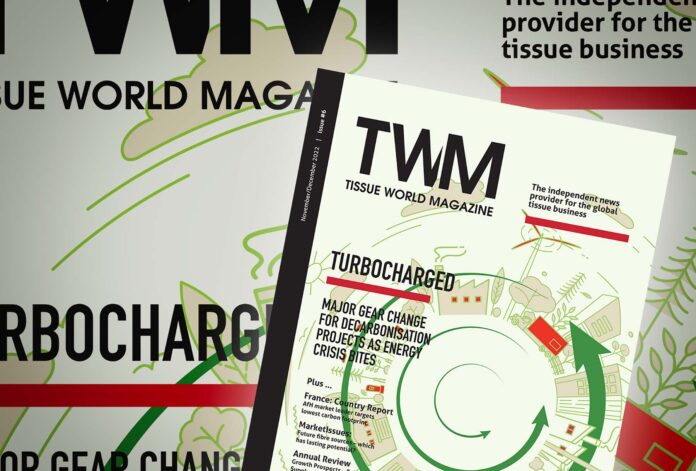 The International Energy Agency says the energy crisis has “turbocharged” renewable projects around the world, with countries adding as much renewable power in the next five years as they did in the last 20.

That is not news to the tissue industry, and TWM highlights various examples of that turbocharging long planned and delivering results. A recent Tissue World webinar revealed contributors engaged in a major shift towards net zero and often in-house energy targets as core principles. TWM reports on just some of those major initiatives.

By 2025 Kimberly-Clark (K-C) will be operating its world first £40m green hydrogen plant at Barrow-in-Furness in the north west of England. It will be a test-case for the potential roll-out of green hydrogen across more of its global operations. K-C wants to make all production at its UK and Ireland plants 100% renewable energy sourced by 2030.

Oriol Margó, Sustainability Transformation Leader, says primarily wind and solar power will run a 35 megawatt electrolyser which will split water into hydrogen and oxygen, producing 3,400 tonnes of hydrogen every year: “The hydrogen is burned to produce the heat required to dry our tissue products, with steam as the only by-product.”

Already scheduled is a 2021 deal to build a wind farm in South Lanarkshire, Scotland. It will be K-C’s first such agreement outside of North America, and is expected to cover 80% of total electricity needs for UK facilities in Barrow, Flint in Wales, and Northfleet on the river Thames.

Over the border in Annonay in the Auvergne-Rhône-Alpes region of south eastern France, MP hygiène’s mill will be pioneering a high-speed tissue machine with an exclusively electric air system, with President and Chief Executive Marc Miribel saying the project will mean the plant’s CO2 footprint will be “one of the lowest in the world.”

Operation optimisation and a move to alternative raw materials are two approaches. He assesses fibre sources including wood pulp, bamboo, bagasse, RCP and straw, as “each fibre source brings its unique challenges.”

In Annual Review, chemical supplier Kemira’s Vladimir Grigoriev, Director, Applications and Marketing, Pulp and Paper, Americas, explains the new direction towards increasing the share of biobased products from 12% to 40% by 2030. A new biosciences partnership is developing polyalphaglucan chemistry derived from glycose. He assesses the likely impact of those changes for Kemira in North and South America, Europe and Asia.

Some good, if rare, news on inflation

We had to go a long way to find any kind of positive reference regarding inflationary trends in these pages. However, we have found one. It comes from Dino Bianco, Chief Executive of Canadian company KP Tissue as he reports “significantly improved profitability” in Q3 (revenue up 9.1% y-o-y), a story in World News: “Inflationary upward pressure appears to be easing,“ he says. Long may it continue, notwithstanding sales volatility from higher prices and consumers trading down. For the most part, though, mills elsewhere are having a hard time of it, with descriptions ranging from “a brutal winter,” a “nightmare,” policy decisions made in “an inflation tunnel,” 2022 energy costs of €2.2m up to €12m next year.