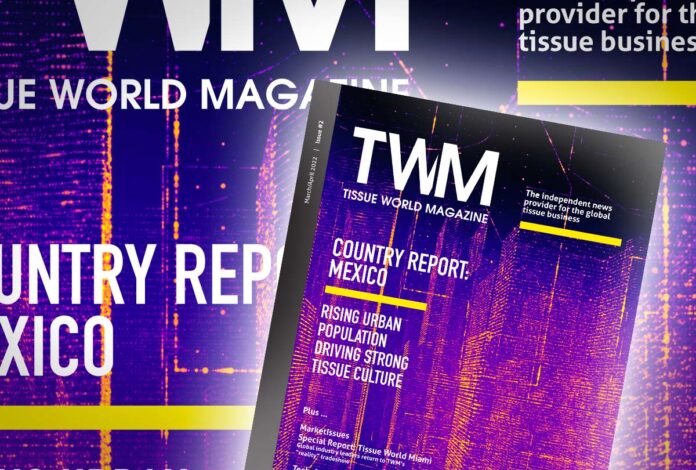 Evidence of the intensive research going into life cycle assessment of tissue products was dominant in Tissue World Miami, and is reflected equally in the pages of TWM.

There are many examples of cradle-to-gate assessments being made at all levels … how is embodied carbon and the carbon footprint better controlled during production, display, delivery, re-use and, only if absolutely necessary, disposal.

The gate in question, the store or supermarket, is for an increasing number of companies the end of the assessment because they are designing products that can be easily recycled or composted, avoiding the landfill altogether.

It has taken time to get to this point of far-sighted awareness over the whole supply chain, or what we might now come to term survival production.

That company is well down that path. Wider afield, European Commission environmental, social, and governance (ESG) regulations from 2024 will require companies to assess and explain financial and impact results … embracing the supply chain from its source material to its destination in the wider environment – the so-called Double Materiality concept.

Today’s essential business strategy is growth that can be sustained. Josh Goulet, Account Manager at packaging systems company Edson, in Hamilton, Canada, explains in this issue’s Technical Theme the pros and cons of side and top-loaders, explaining that the company’s 4000TL top loader is especially suited to e-commerce supply chain applications. E-commerce sales in the US reached 13.3% of all retail sales Q2 2021, an increase of 2.5% on two years earlier. Globally, they reached US$4.28 trillion in 2020, expected to top US$5.4 trillion this year, and rising. Manufacturers can now sell single roll up to large mega-packs online on a larger platform, increase their customer base geographically, reducing consumer miles travelled. A growth and climate strategy in action.

We learn in our Country Report on Mexico that its tissue culture is strong, and carries big potential. To the south, the bigger market of Brazil is outperformed on household disposable income – almost twice as much at almost $20,000 last year.

Potentially crucially, while Mexico’s 129 million population is almost 100 million fewer than Brazil’s, that population is on a steady percentage rise, and younger, discerning consumers are more climate and hygiene aware with lifestyles requiring tissue products to play an important role, during and post-pandemic.

To the north, the huge market of the US through which Mexico has grown both its import and export tissue business over the last two decades. Expansion and technological advances has meant premium private label business competition within America, and Canada. Country Report talks to Fábrica de Papel San Francisco’s Sales & Marketing Director Juan José Mubarak Helú Villavicencio, at his Baja California base. He foresees a 5% plus tonnage sales growth as the country begins to emerge from the pandemic, and tourist income picks up.

And to Luis Alberto Reséndiz, General Director of Convertipap, a family-run tissue manufacturer based at the company’s Tlaxcala plant located four-hours east of the thriving Mexico City.

TWM had the benefit of on-site reporting during a tour of the plant with Mr. Reséndiz in 2018. The plans-in-action pointed out then are coming to fruition… while the pandemic tested development, continued investments have brought the goal of 125,000tpy production target into sight with a sixth tissue machine due on stream Q4 2023.