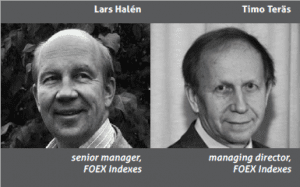 June market pulp statistics from the North American-based market intelligence provider Pulp and Paper Products Council (PPPC) came out
quite strong. This was partly due to some of delayed shipments from May adding to the June total. Total shipments were up by 7.7% (or almost 300,000 tonnes) against June 2013 and the cumulative numbers over the first half showed now a minor 0.5% gain over 2013 after staying behind last year’s volumes over the first five months.

In BSKP, shipments were up much less, by only 0.5% for the month and still down by 0.3% cumulatively. Strong total shipments helped producer stocks down, too, by two days for the total, seasonally adjusted. BSKP stocks were flat (although down by one day without the adjustment). Shipments to WE were up for the month of June, against June 2013, by 0.9% but still down by 1.1% over the first six months. With production losses continuing, the softwood pulp market remains firm. 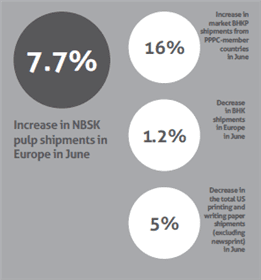 In hardwood pulp, the late delivery of May volumes within June boosted the numbers as did the near-record shipments to the Chinese market. Market BHKP shipments from the PPPC-member countries were up in June by almost 16%.

This pulled the cumulative shipments also to black numbers with a 1.5% gain over the first half 2013. Shipments were less strong to Europe, however, with June tonnage down by 1.2% and the cumulative number up now by just 0.2%. The strong shipments to China and other Asian countries brought the BHKP producer inventories down by six days from end May without seasonal adjustment and by five days with the adjustment. Still, those stocks are slightly higher than a year ago. The introduction of new tonnage has increased the spot offers and has indirectly also affected the contract prices which we follow.

The Euro weakened by 0.6% against the dollar from the previous week. Helped by the USD-strengthening, the PIX BHKP index value in Euro came down by only 21 cents, or by 0.04%, and landed at 542.12 EUR/tonne. With the dollar-strengthening probably impacting the sales price, the PIX BHKP index value in dollars came down quite substantially, i.e. by 4.89 dollars, or by 0.67%, and closed at 728.61 USD/tonne.
Paper industry

Increasing data over June confirms the continuation of the recent trends. Graphic paper decline has continued and packaging side shows moderate gains over the corresponding month/period in 2013. As an example, total demand for North American newsprint was down by 7.7% for the month of June and by 6.6% over the first six months.

In the US, uncoated free sheet (the largest of the graphic paper grades) total shipments were down by as much as 7.9% for the month of June and by 8.0% over the first six months of the year. Total US printing and writing paper shipments (excluding newsprint) were down by 5% in June. But on the packaging side, US containerboard prod
uction was up in June by 0.7%, y-o-y and by 0.6% over the first half of the year and the U.S. boxboard production increased in June by 1.2%. Prices have started to move up, though, also in coated and uncoated free sheet grades.

In Europe, packaging sector numbers are not at our disposal over June. The preliminary printing and writing paper numbers from PPPC show a 3.3% decline for graphic paper total shipments in June and a 4.1% drop over the first six months. This is split between a 2.1% decline, y-o-y, in printing and writing and a 7.6% retreat in newsprint. The cumulative numbers are -2.3% and -10.8%, respectively.

In Europe, price increase attempts have not succeeded in recent months but in packaging, new initiatives have been announced from either August 1 or September 1. The recent modest weakening of the Euro raises costs from imported raw materials and improves the odds for paper and board price increases.