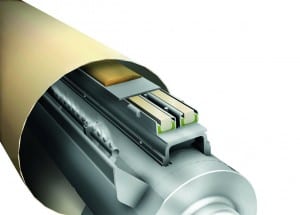 Both developments are in response to demand from customers for quality and cost savings, the company says.
Klaus Gissing, Andritz vice president tissue machines/air engineering, said: “It is known that with steel as the base metal, the cylinder walls can be thinner than a cast unit (which produces more efficient drying) and the elasticity of the steel increases safety.
“But the Yankee is the single most expensive component on a tissue machine and so we have set out to develop an alternative that would be less expensive but better than or equal to cast.”
He said the company assumed the market would be small, narrow machines (2.8 to 3.6m widths) and so it worked on Yankees in the 12-15 ft. diameter range.
Mills that have cheap steam available (e.g. biomass) want bigger Yankees to get better drying at lower costs, while eliminating gas-heated hoods.
In 2012, Zellstoff Pöls, Austria, asked for a proposal for a new MG machine and the design called for a 22 ft. diameter Yankee.
Gissing said: “Our engineers could build it but the issue was how to transport it. The solution was to pre-manufacture it in two pieces and assemble it at the mill. The result is the world’s largest Yankee is operating well.”
The company will also be showcasing its PrimePress XT shoe press which has evolved into a state-of-the-art version – the PrimePress XT Evo.
It further enhances dewatering and tissue quality and reduces operating costs.
He added: “We asked customers what the biggest problem with shoe press performance is.
“Conventional shoe presses work well until you get to the sheet edge. At that point you get edge flutter, which requires you to slow down the machine or increase the steam pressure in the Yankee. Either way you lose production.
“We have now developed a patented system for adjusting the line forces at the sheet edges.”