The company said it is a revolutionary product to be used on tissue machine unwinders and added that it has an immediate payback and has been tested in several paper mills around the world. 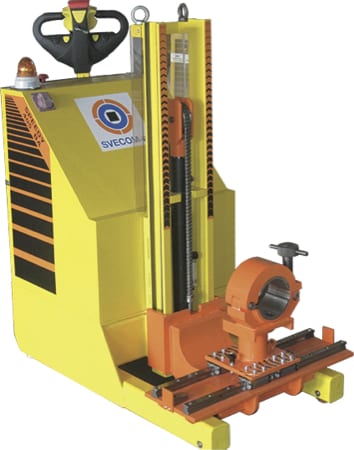 The chucks increase the life of cardboard and plastic cores without damaging them during the unwinding of the reels.

The average life of the cardboard cores usually varies from plant to plant, from one cycle to 10 cycles, and by the plastic cores from 50 to 100 cycles.

Svecom said it can now increase the average life of cardboard cores to 20-50 cycles and the plastic sleeve can reach 100/200 cycles.

The company said: “The 714MZL avoids all injuries during the several inserting and the extraction operation.

“Thanks to our chucks you no longer need to use the tools that are normally used to help the paper core insertion of standard chucks.”

The chuck also automatically blocks the core to permit handling in total safety.

Also showcased will be the Smart Trolley 405/BAL for the revolutionary chuck, with a rotating +/- 90° and translating jaws.

It extracts and introduces chucks due to a translate movement which the company said is useful when the space between the tissue reel and the wall (or machine) is limited.