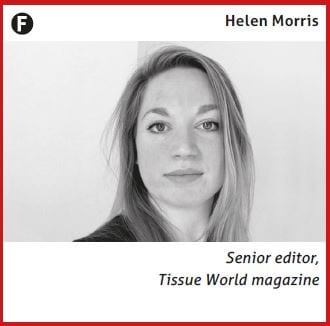 Canada, of course, has a big neighbour. The biggest, in economic terms, which while returning a fluctuating performance is never, currently, less that the biggest economic giant.

In tissue terms, Canada is small scale … it’s a saturated market with retail per capita usage one of the highest in the world. Retail tissue posted volume growth of under 1% to reach 486,000 tonnes in 2016. GDP is just 1.8% this year and growth in disposable income just 0.2%, projected to be just 2% by 2030. Population levels are dropping … immigration accounts for more than 50% of Canada’s population gains. Unmet potential is significantly lacking.

Those facts mould the home demand for tissue products. Now companies are increasingly re-casting the future of their away game.

Canadians – or North Americans as many like to refer to themselves – can point to big statistics and powerful players of their own. Canada’s forests are off-the-scale immense. Its rivers flow fast and wide. Its trees are made of strong fibres. Its sustainability record, for the most part, is second to none.

By the time of going to press a US$64m tissue machine will be rolling or about to roll in Scappoose, Oregon, on the big neighbour’s west coast where Cascades’s latest phase of an extensive makeover in investment, innovation, modernisation and new products is manifest.

President and chief operating officer Jean Jobin talks impressively of his big  company ambition guided by a small company ethos of intimate response. The makeover swept brands away, and now marketing director Andre Daviault talks of  an AfH operation completely revamped, and a PRO marketing programme which will be creative, fun and with a cheeky tone: “You have to get creative to sell toilet paper.”

The impressive Northwood mill in Prince George gives Canfor Pulp a competitive advantage shared by no other. The pulp giant is planning a bigger future in tissue.

Country Report Canada charts where and how performances are growing.

Looking on the bright side of Brexit

Uncertainty in business helps no-one. It could be said that to leave the world’s biggest trading bloc of more than 500 million people with plenty of disposable euros and pounds in their pockets without sorting out other trade deals beforehand is about as uncertain as it can get.

But the Brexit vote has happened, and two or more years of wrangling are set in train.

One UK boss is looking on the bright side. Poppies is a leading manufacturer and supplier of high quality digitally printed napkin lines that offer a bespoke, photo quality print on tissue.

Owner and technical manager Armindo Marques sees an opportunity. Since the vote raw material costs have risen by 14%,bad news for Europe’s biggest importer of tissue paper as the deals are done in  Euros and US dollars. So retailers are now favouring domestic suppliers, he says.

Is there a company which will meet the demand? Step forward Mr Marques.

He explains his strategy in ExitIssues, renamed for this occasion as BrexitIssues.