A global tissue business in excess of 2.6 million tonnes a year and providing 35% of all tissue sold internationally, bulk parent roll trade offers new potential and a chance to sell overcapacity. But will they find enough clients to maintain the growth? 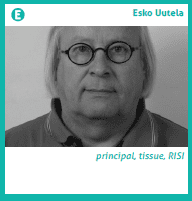 It is a fact that tissue products due to their high bulk do not normally travel long distances like other paper and board grades. This means that most of the international trade is between the neighbouring countries. Global tissue imports and exports were in the range of 7.2 million tonnes in 2013 and probably reached 7.5 million tonnes in 2014 (our estimate as some trade statistics for 2014 are still missing). International trade accounts for about 22% of global tissue consumption.

However, in recent years international tissue trade has grown slightly faster than tissue consumption. From 2003 to 2013, global tissue consumption showed an average growth rate of 3.4% per year – this average suffered from the low 1.2% growth rate in the Great Recession year 2009 – while international trade has grown by about 4% annually during the same period. The most interesting feature during this time is that intercontinental tissue trade has grown faster than pan-continental trade. New export-oriented capacities built in Asia, mainly in China and Indonesia, and the MENA region, particularly in Turkey, Egypt and the United Arab Emirates, have been the main reason for the rapid increase. A large part of this new capacity delivers mainly tissue parent rolls to converters around the world. In the following the global tissue parent roll business is discussed in more detail.

Based on statistics collected by RISI, the global tissue parent roll business reached about 2.6 million tonnes in 2014. This means that about 35% of all tissue sold internationally is delivered as parent rolls, which can be transported longer distances than the main part of converted tissue products – roll towels and toilet tissue are the bulkiest goods, taking up considerable space in relation to their nominal weight; hence, transport costs are high. The international parent roll trade has clearly grown faster than tissue consumption or the tissue trade in total. In the past five years, the growth rate of parent roll imports and exports has averaged almost 7% per year compared to growth in the trade of converted tissue products of 4% per year.

The top 10 tissue parent roll exporters account for approximately 68% of the global total (Figure 1). Italy and Indonesia are the two largest suppliers; in 2014 Italy had slightly higher parent roll exports than Indonesia, while in 2010-2013 Indonesia took the top position. Italy is the pan-European supplier of tissue parent rolls. Western Europe accounts for 63% of its total exports and Eastern Europe for 31%, leaving only 6% for deliveries into other regions. About half of Indonesian tissue roll deliveries go to other Asia Far Eastern countries, China and Japan, 22-23% to North America, 13% to Oceania, 11% to the Middle East and the remaining 3% to other regions. Deliveries to Western Europe are minimal. Indonesia’s parent roll exports fell by more than 30,000 tonnes in 2014, primarily because of lower sales in the Middle East, in the United Arab Emirates and Iran, in particular, and North America (which is not shown by the US import statistics, so there may be an error in the Indonesian statistics).

‘APP is the largest tissue parent roll supplier worldwide, built on export-oriented capacity in Indonesia and from its Chinese mills.’

China and Turkey are the third- and fourth-largest tissue parent roll exporters, respectively. China’s largest trading partner is Oceania (31%), followed by Asia Far East and Japan (18%), Europe (15%), North America (12%) and the Middle East (9%). China delivers to all parts of the world, including Latin America and Africa. Turkey’s tissue parent roll exports decreased by about 17,000 tonnes in 2014, most of which was caused by sporadic deliveries to the USA in 2013, which did not repeat in 2014. The United Kingdom and Israel are the two most important trading partners for Turkey.

Of the individual companies, we claim that Asia Pulp & Paper (APP) is the largest tissue parent roll supplier worldwide, although we do not have any exact numbers by company. APP has built export-oriented capacity in Indonesia, and also delivers parent rolls from its Chinese mills to customers abroad. Several Italian companies are involved in the parent roll business, including larger groups such as Sofidel and IC Tronchetti, but part of their exports are internal (captive), going to their own converting plants in other countries. In China, one large PM of Hengan is reportedly dedicated to parent roll deliveries to just one major client in Australia. 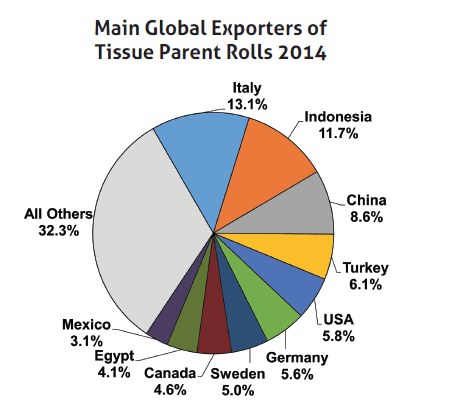 The import business of tissue parent rolls is clearly more fragmented than the export business: the top 10 importers account for about half of all deliveries compared to more than two-thirds of the top 10 exporters (Figure 2). The USA is the largest importer with its main sources being Canada, Indonesia, Mexico and China. The United Kingdom has a crowd of independent tissue converters importing parent rolls, with the main trading partners being Turkey, Italy, China and Germany. Germany is also a major importer but the majority of the volume is captive and/or transit business as there are very few independent converters with the exception of the napkin business. Australia and Hungary complete the top five parent roll importers.

‘It is likely that parent roll trading will continue to grow, but will there be a sufficient number of clients for new deliveries?’

ABC Tissue is the largest importer in Australia with rolls coming mainly from China, followed by Indonesia and Vietnam. Hungary has a number of large converters which need imports as the domestic tissue industry is weak and cannot fulfill the parent roll needs of all converters. Hungary’s main import sources are Italy, Germany, Romania and Sweden.

What can be expected in the coming few years? Considering all the new tissue projects worldwide, it is likely that parent roll trading will continue to grow. The main question is whether there is a sufficient number of clients for new deliveries. The decline in parent roll supplies from Indonesia and Turkey in 2014 is a worrying sign that perhaps it is not that easy to sell overcapacity as parent rolls abroad. 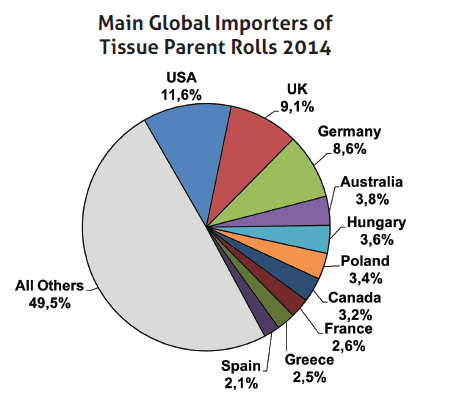