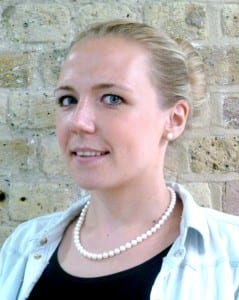 Toilet paper sales show once again that the UK consumption culture rather resembles the US than its neighbours on the continent.  Whilst the region’s private label share is showing an overall positive growth trend reaching around 53% in 2012 with Germany in the vanguard at an impressive 82%, private label toilet paper in the UK has seen a decline in share for the third consecutive year, now standing just above 40% in a category worth US$1.8 billion. Similar to US consumers where the private label share remains below 20%, UK consumers still purchase branded products and with fears of a triple dip fading, leading brands are able to strengthen their position.

But it is not just recurring brand loyalty that is taking its toll on the private label share, the branded competition is also benefitted from a decreasing substitution, promotional activities, and the competitive retail environment.

One might assume that essential consumer goods such as toilet paper generally see a fairly inelastic demand under the economic state of a developed and saturated market.

In times of economic prosperity, consumers would not use more toilet paper, whilst a recession would likewise not provoke a cut back on consumption. However, the latest financial crisis revealed that in the UK, toilet paper shows in fact a countercyclical sales pattern: in the wake of the Lehman collapse, consumption grew by 1.5% annually over 2008-2010, while total retail volume saw an annual 1% decline since 2010 when the UK economy started to recover.

One reason for this negative correlation is that in times of financial uncertainty, people tend to stay at home to save money, which consequently increases consumption but consumers also start to substitute other disposable paper and nonwoven products with toilet paper. It is not that consumers are buying toilet paper specifically for other tasks but they decrease spending on products such as facial tissues or wipes and turn to toilet paper for make-up removal or basic cleaning tasks. Since those consumers with a tighter financial budget are also those who generally opt for toilet paper in the budget segment, it explains why not only the consumption but also market share for private label toilet paper saw an increase over 2008-2010. But with the recovery of the UK economy, substitution decreased along with private label share.

’UK consumers still purchase branded products and with fears of a triple dip fading, leading brands are able to strengthen their position.’

THE BIG FOUR CONTROL THE MARKET

Brand loyalty in toilet paper is driven by various factors in the UK. On the one hand, softness is an important feature for consumers. In 2012, only 12% of volume sales accounted for economy toilet paper, those with no added texture features, compared to 66% in Germany or 59% in France. To accommodate the consumer’s taste, the four leading grocery retailers in the UK, Tesco, Sainsbury’s, Asda, and Morrisons have put great effort into developing a three-tier product segmentation to offer ‘good, better and best’ product quality. But due to heavy promotional activities for branded products, price differences to private label are marginal. At Sainsbury’s, Kimberly-Clark’s Andrex, the market leader with a 34% value share in 2012, sells at £4 for 9×241 sheets when on sale, the same price as for Sainsbury’s Super Soft White Toilet Tissue 9×240 sheets.

However, the difference within private label is substantial with £0.08 per 100 sheets for Sainsbury’s budget toilet paper compared to £0.18 for the super soft option. Consequently, it appears the leading retailers are not trying to poach consumers off the branded competition, but to make consumers trade up within their store brand offerings which explains why private label volume sales are stagnated but value sales increased slightly over 2011-2012.

NO CHANGE ON THE HORIZON

It is unlikely that in the UK private label shares in toilet paper will draw level with Germany any time soon. In Germany, the retail environment is dominated by discounters which mainly sell their store brand options. In the UK, the retail environment is dominated by the four large retailers who on the one hand rely on sales of branded products but still try to take a piece of the pie by selling their own labels. Additionally, UK consumers  are not just value driven but prefer a product with extra features such as increased softness. It will take another recession in the UK for private label shares to increase.

‘UK consumers are not just value driven but prefer a product with extra features such as increased softness.’ 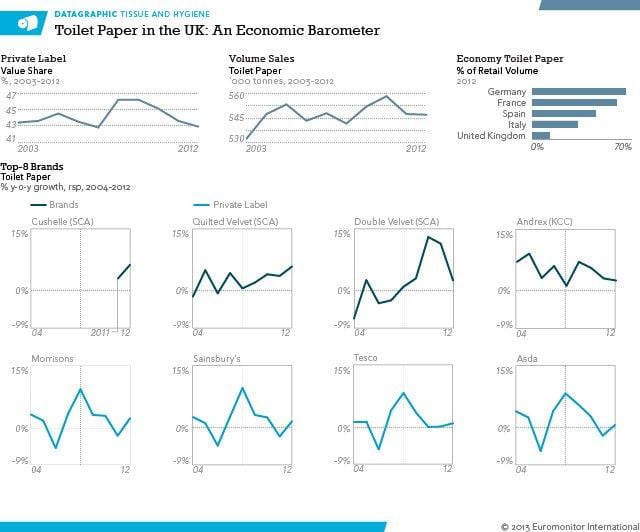