Germany is the European Union’s (EU) largest economy  and the second largest producer of Towel and Tissue (T&T), making nearly 1.5 million MT/Yr. That means Germany, second only to Italy, represents about 20% of European Union capacity. Germany went through a series of economic reforms between 1998 and 2005. The reforms addressed chronically high unemployment and low average GDP growth. As a result, there was strong growth in 2006 and 2007 as well as a reduction in unemployment. These improvements, in addition to government subsidised reduced working hour schemes, led to a relatively modest increase in unemployment during the 2008-09 recession and an eventual decrease to 6.5% in 2012. GDP contracted 5.1% in 2009 but grew by 4.2% in 2010, and 3.0% in 2011, before dipping to 0.7% in 2012 driven by investment uncertainty and the decreased exports to recession-stricken periphery countries. Nevertheless, the EU and German T&T business managed to sustain growth through these poor economic times (Figure 1). 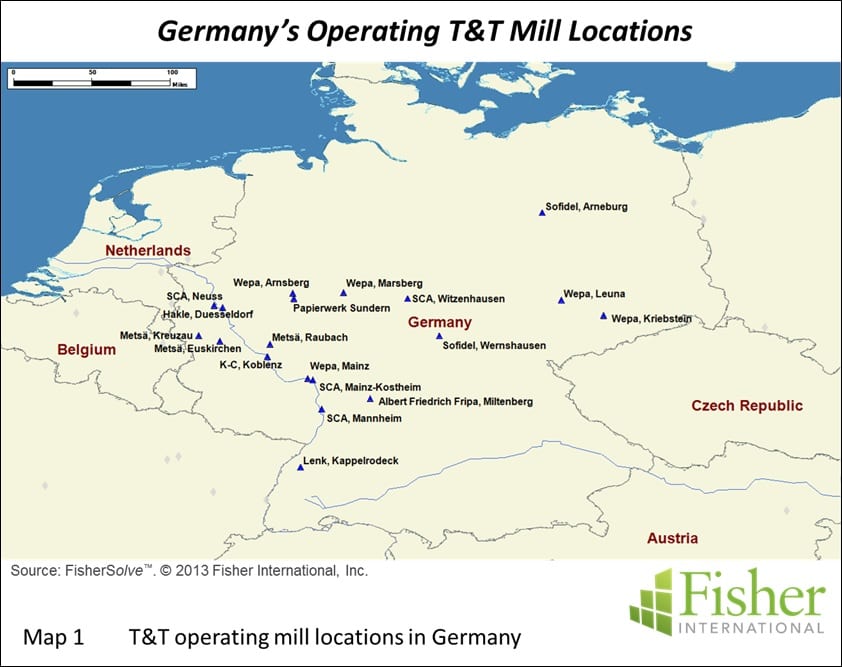 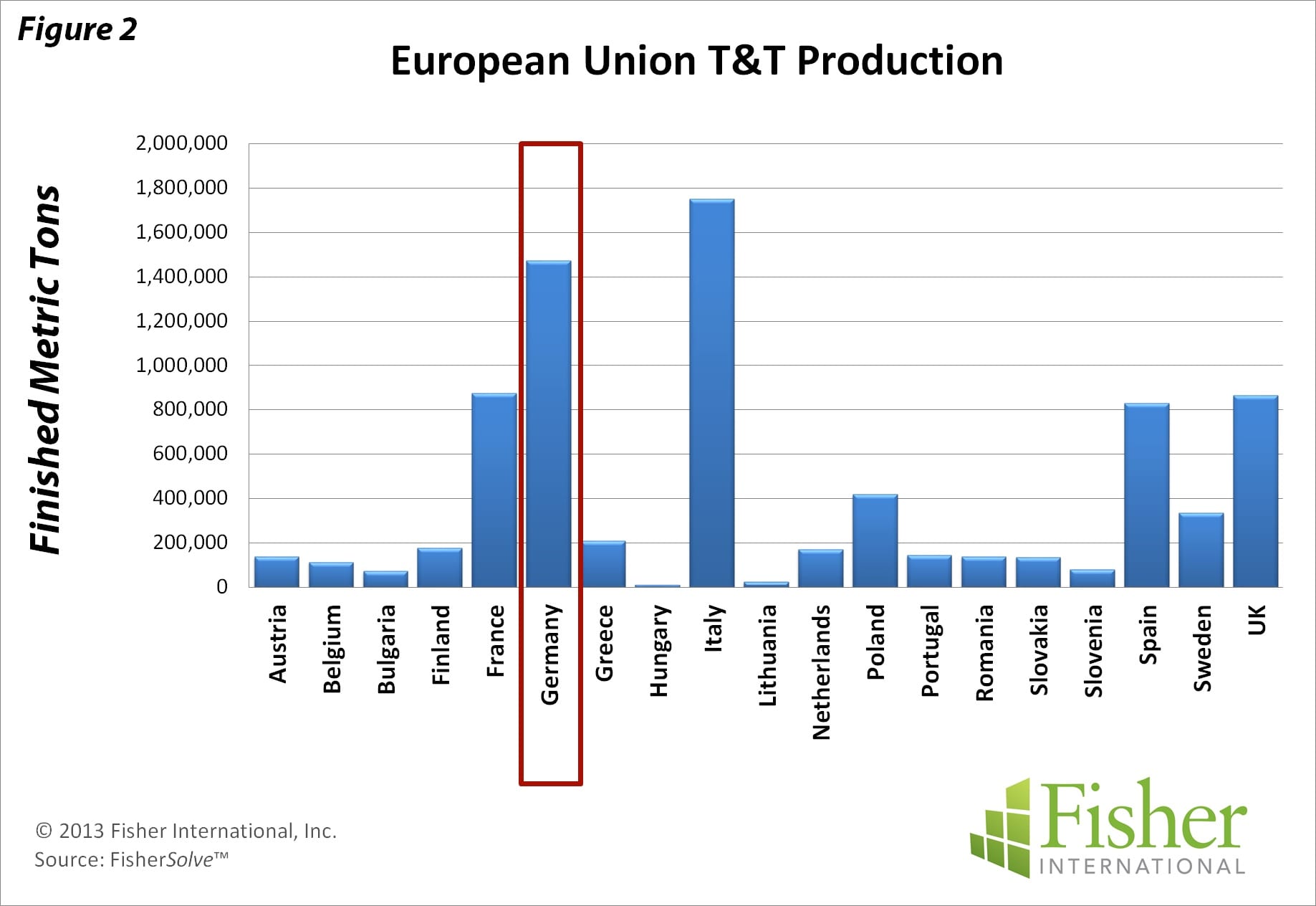 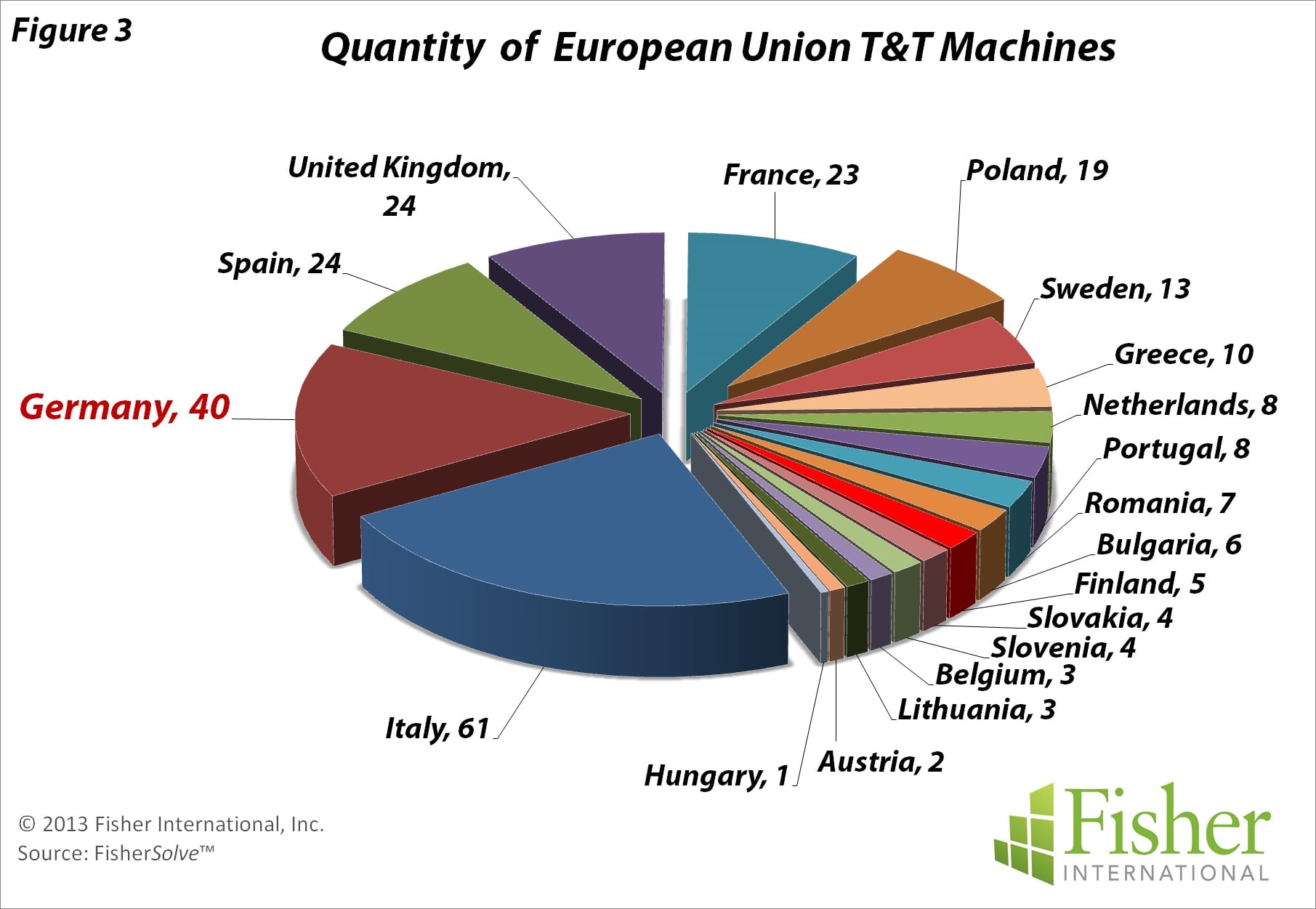 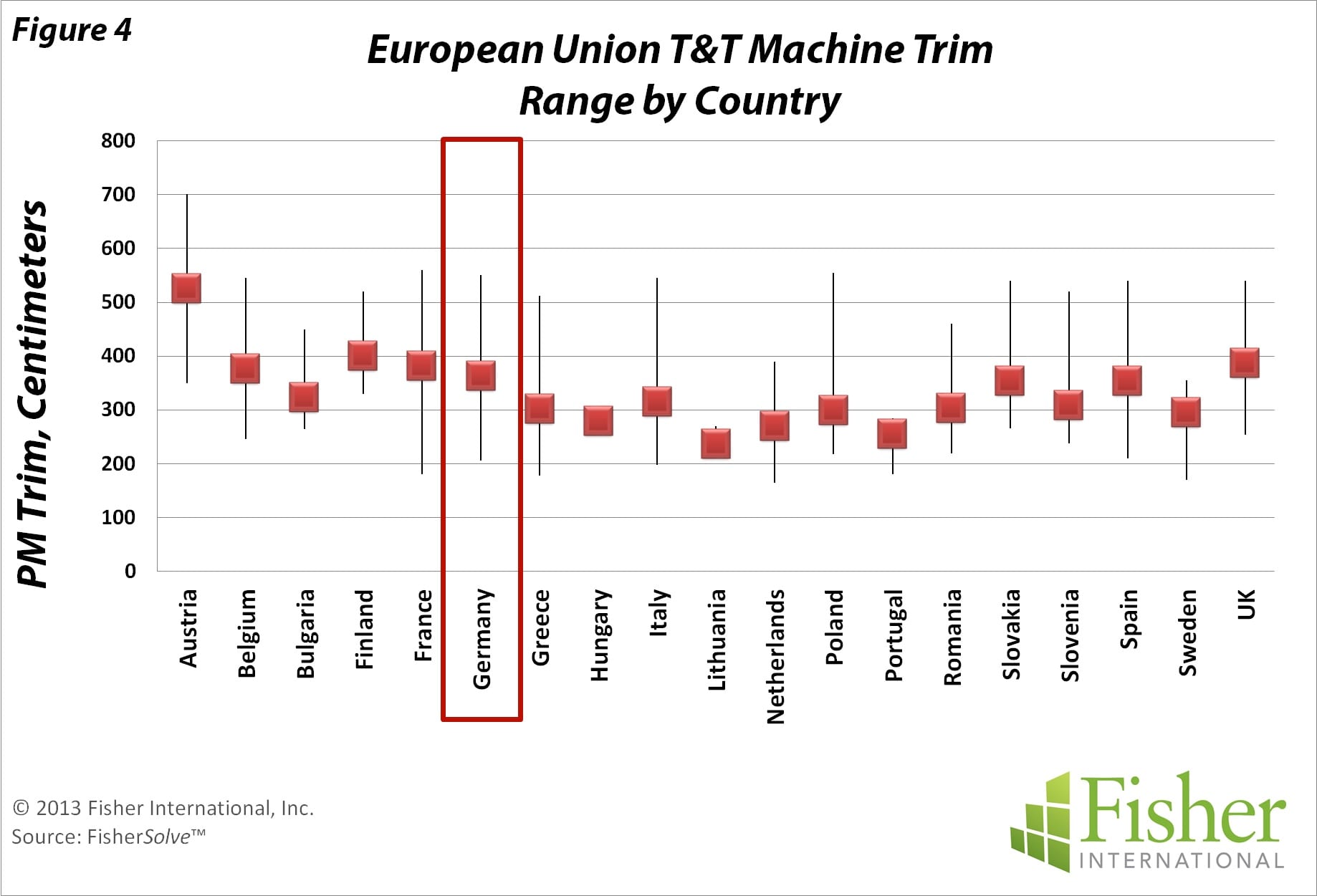 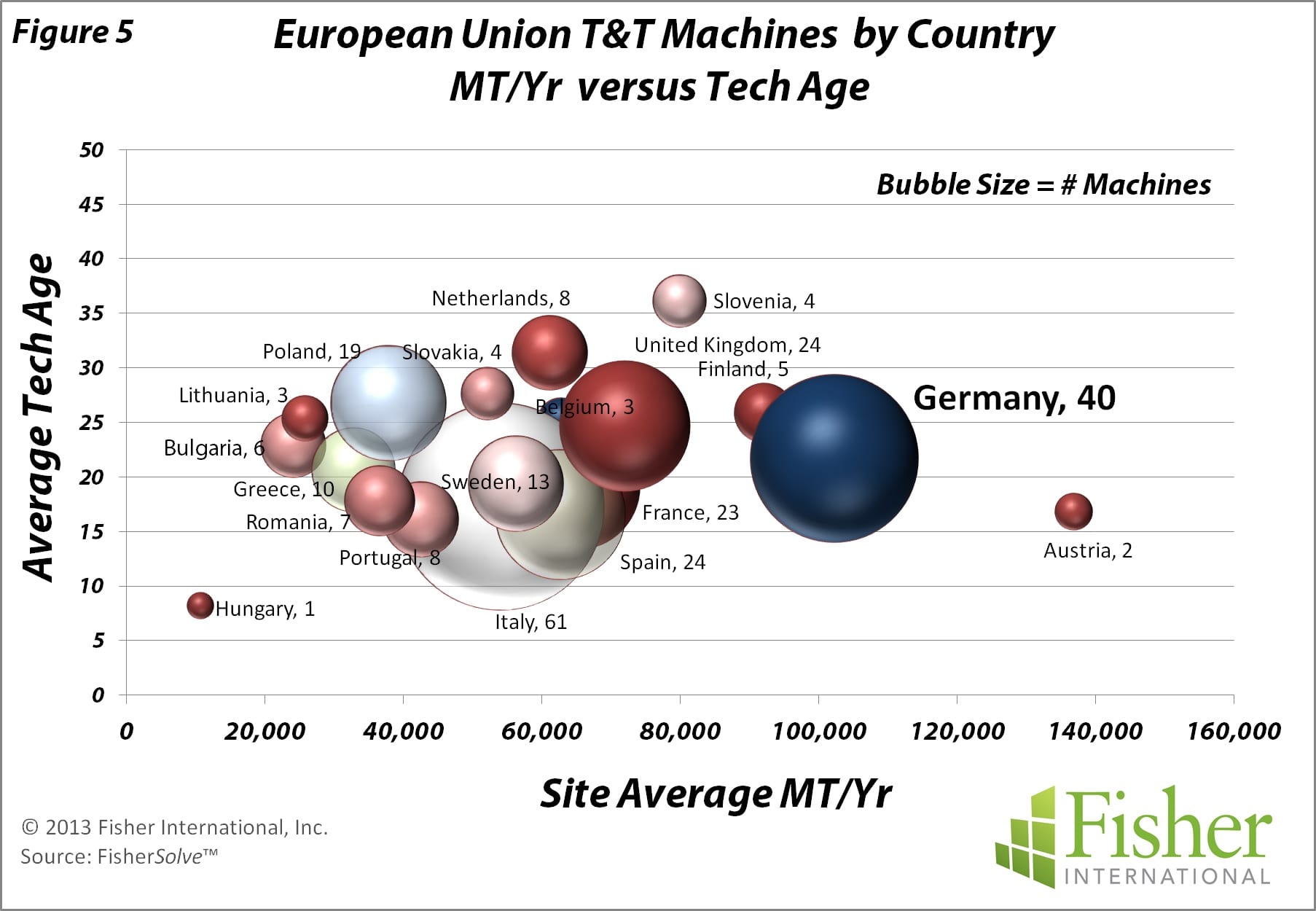 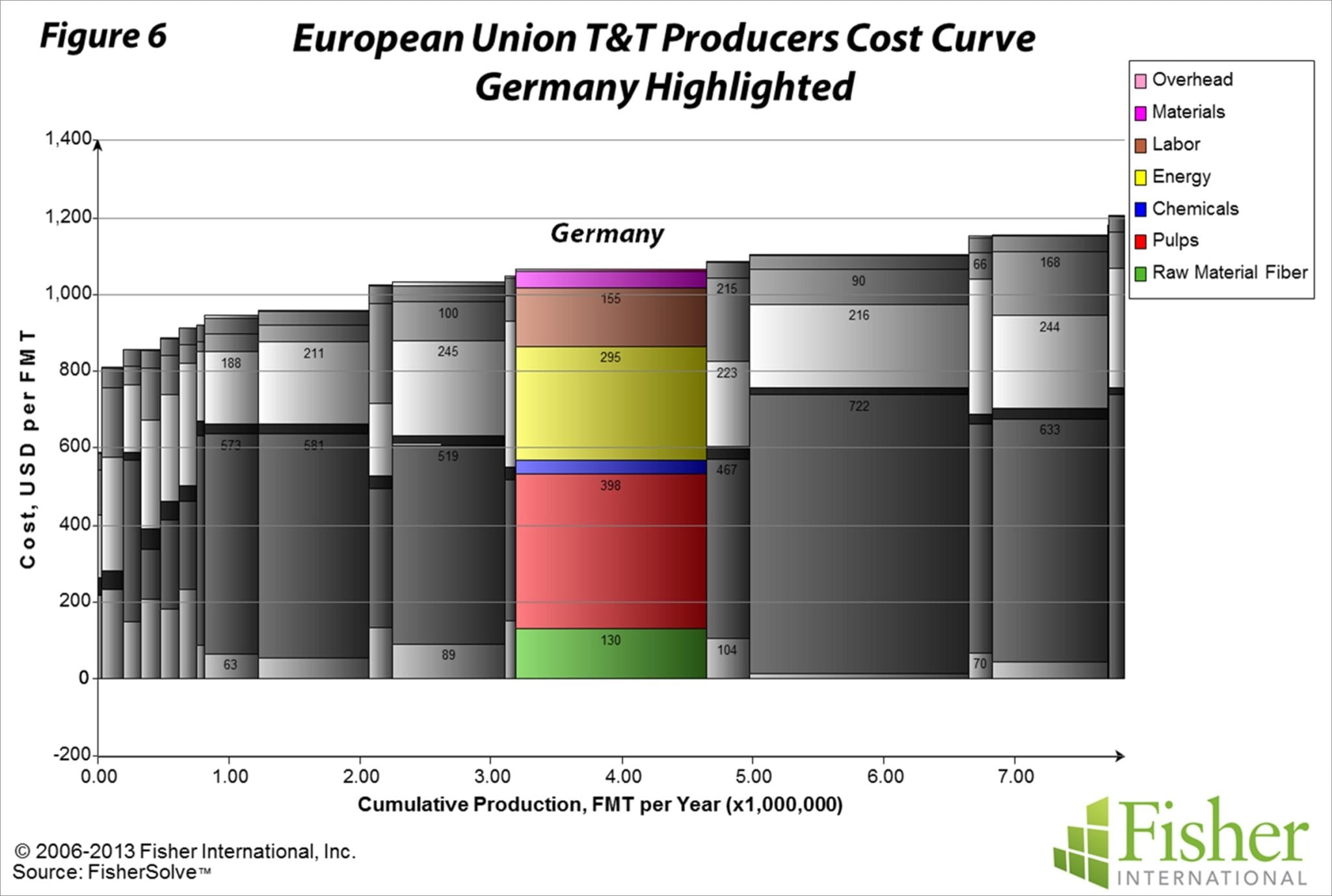 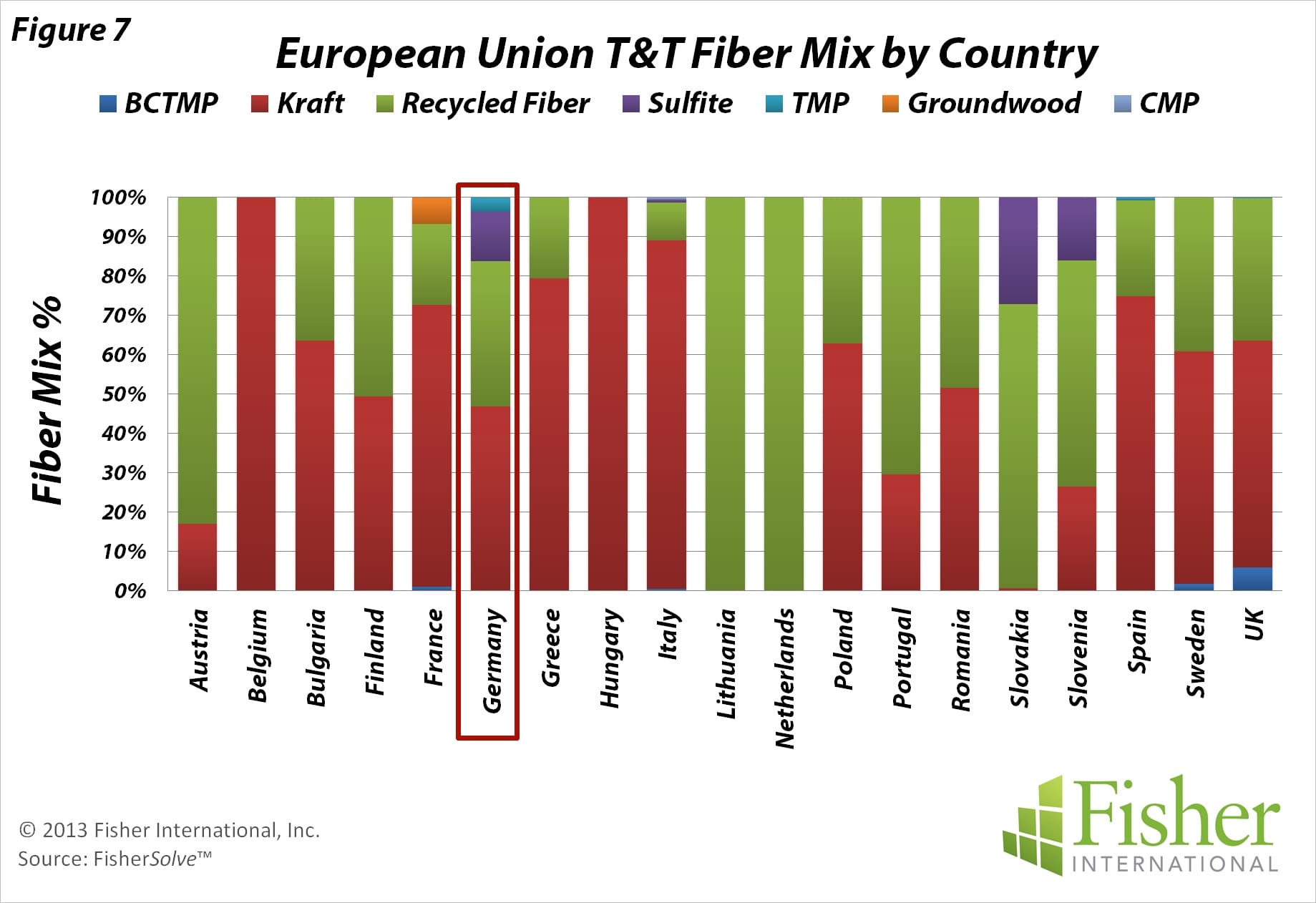 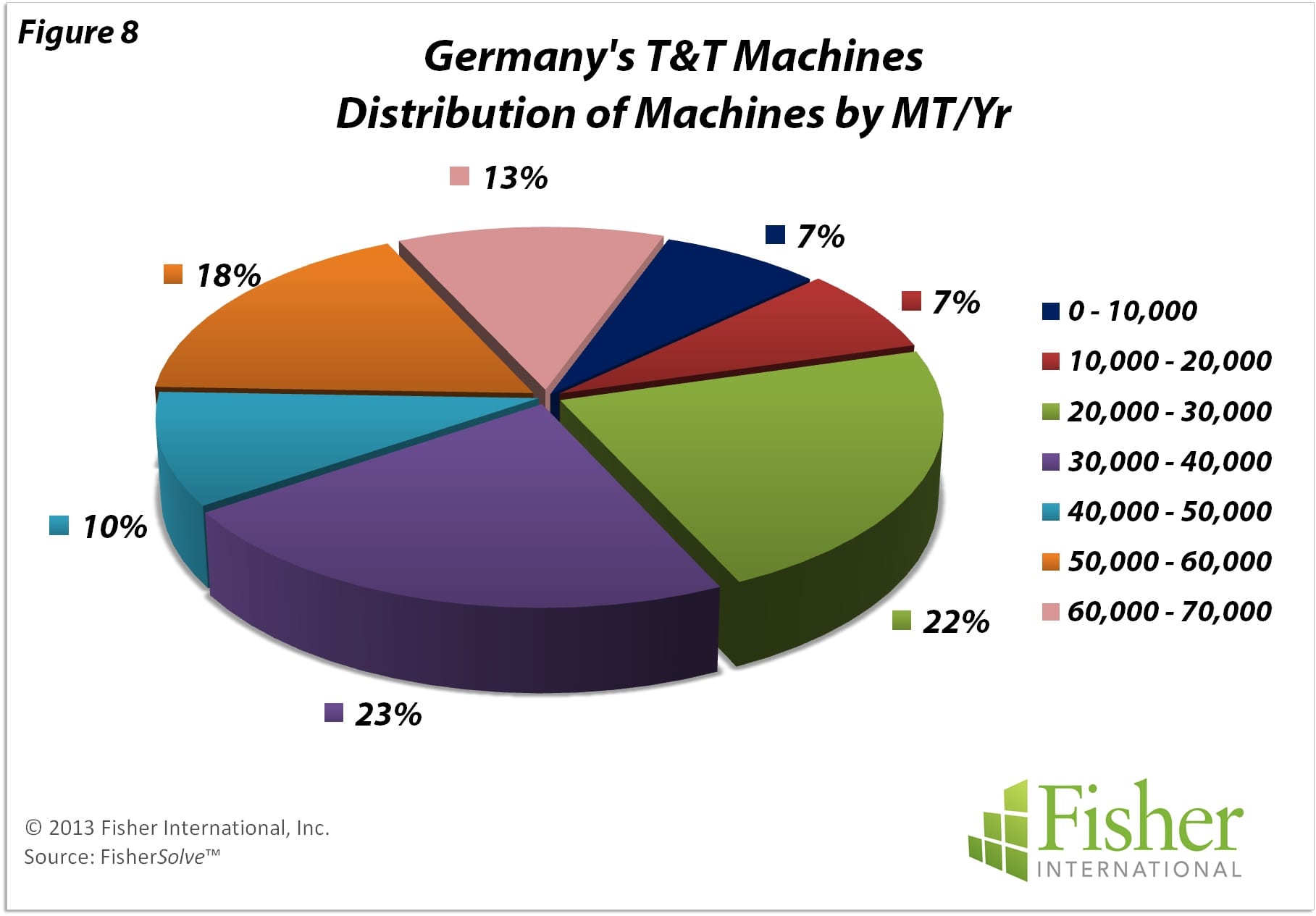 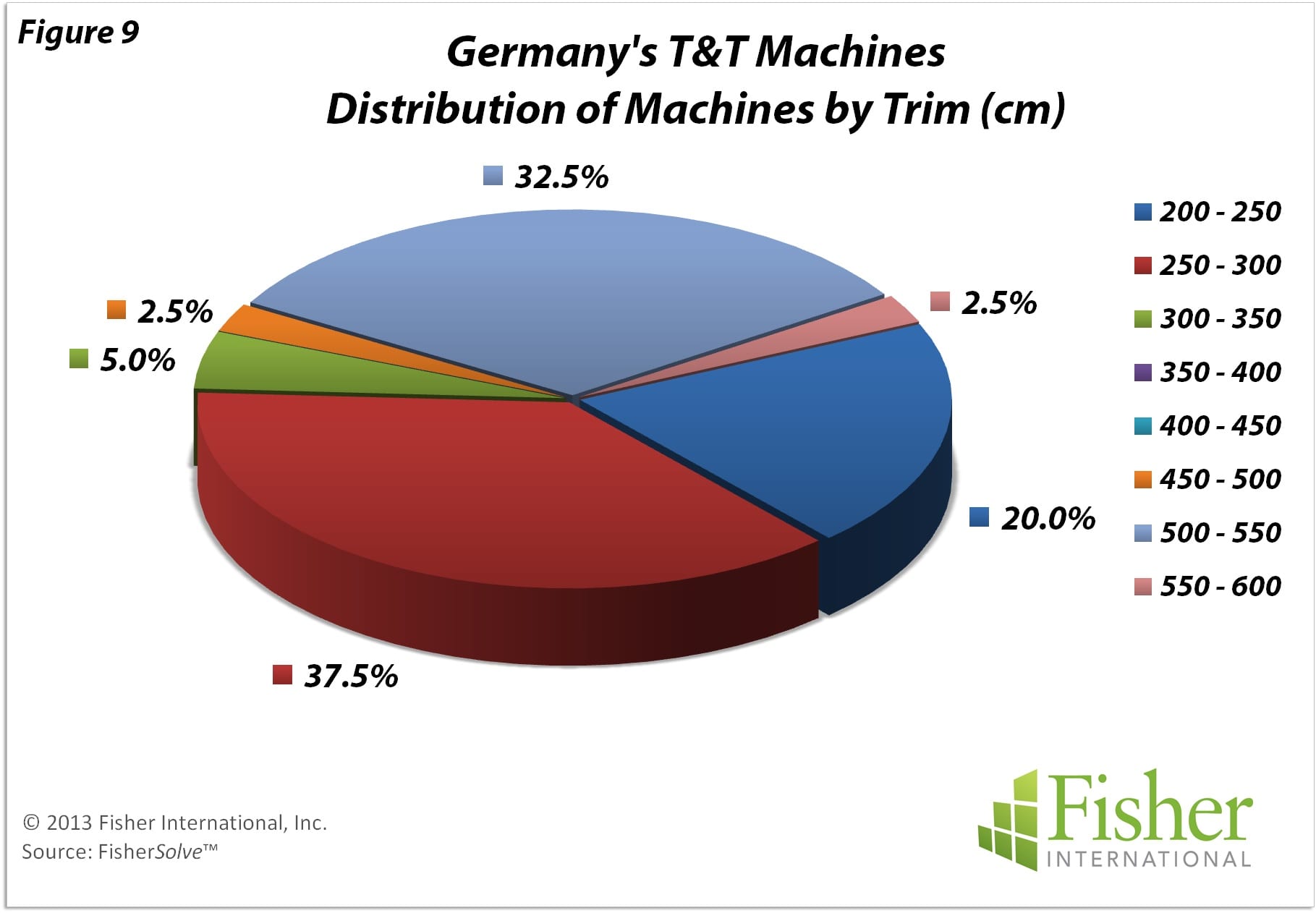 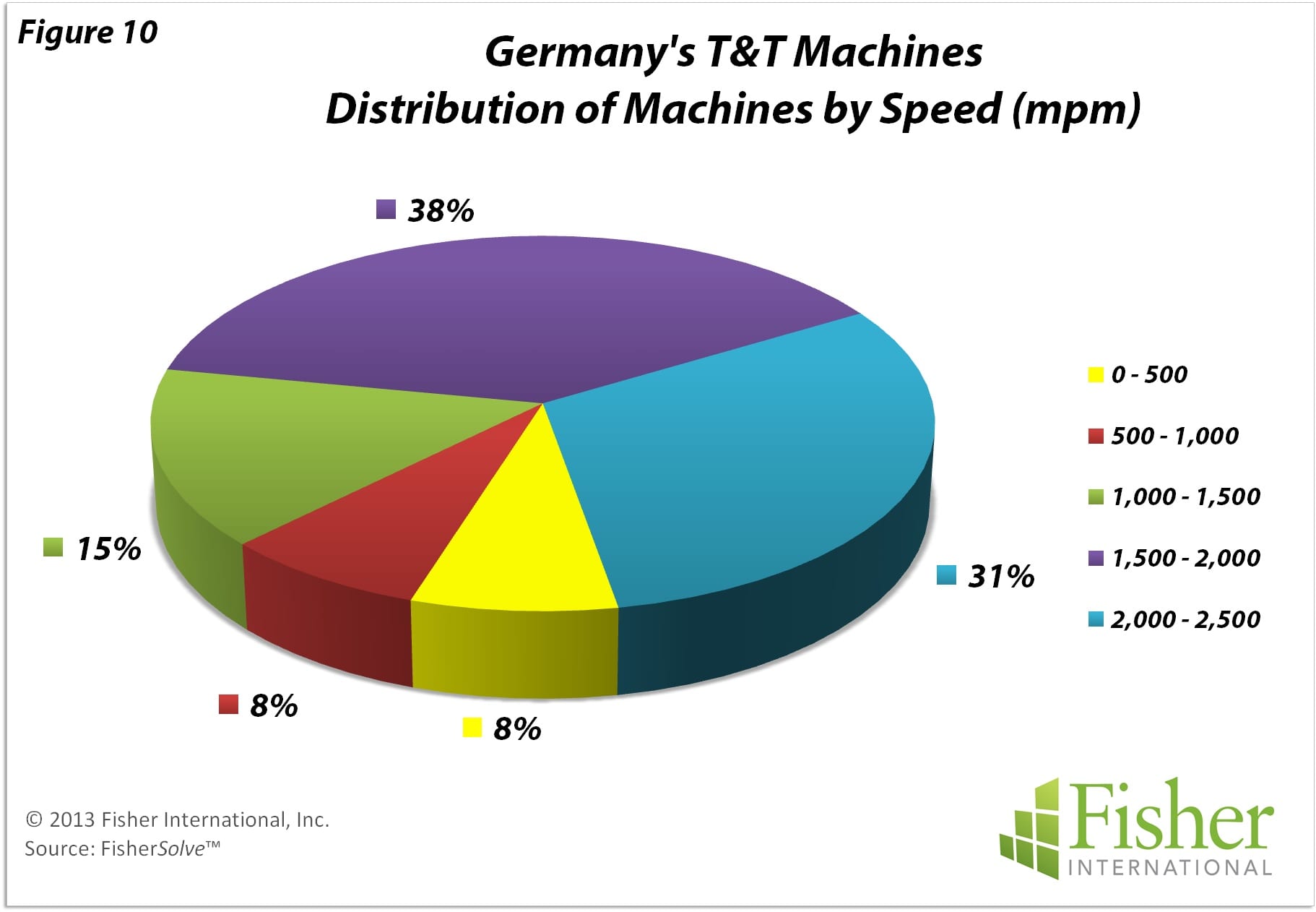 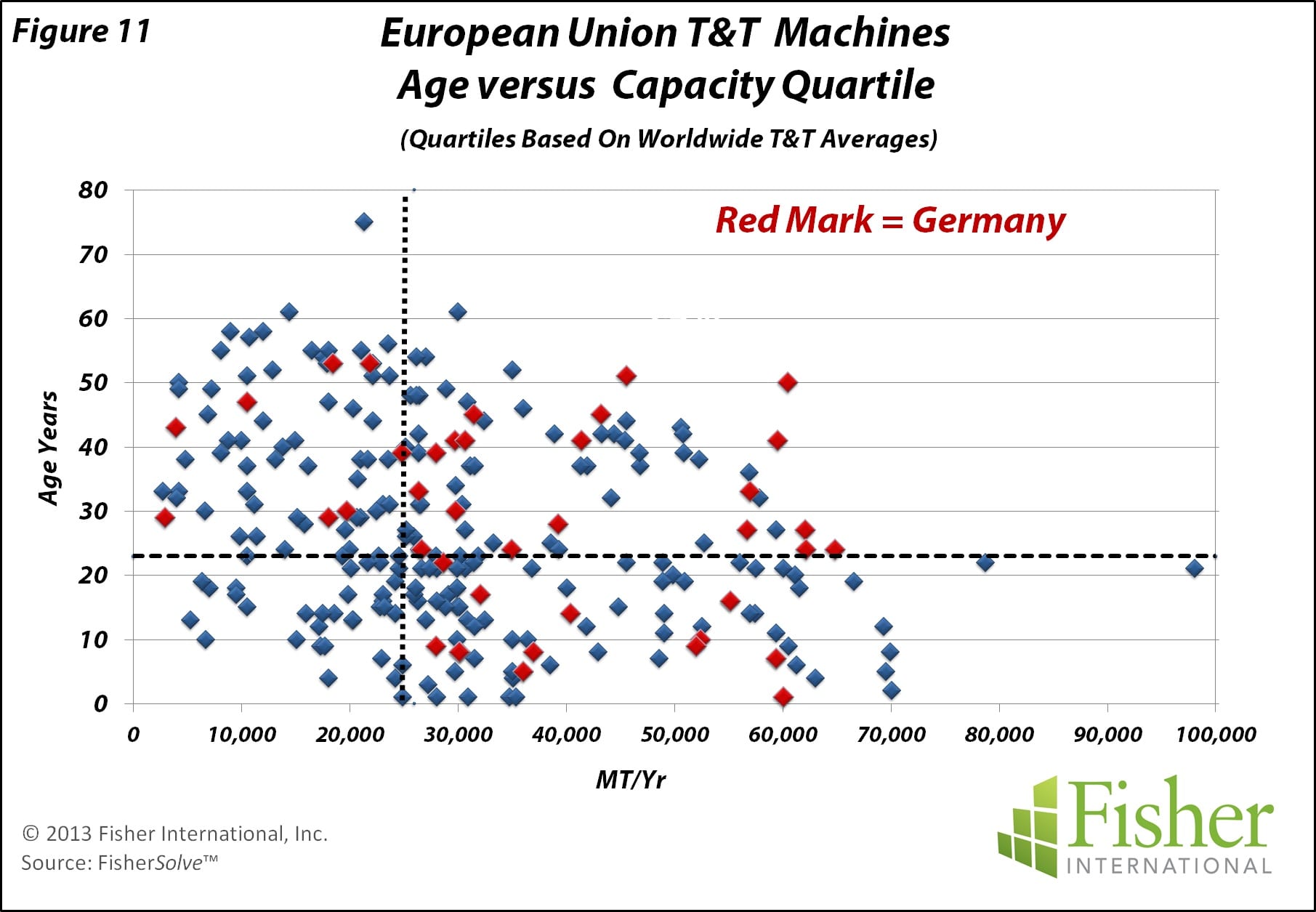 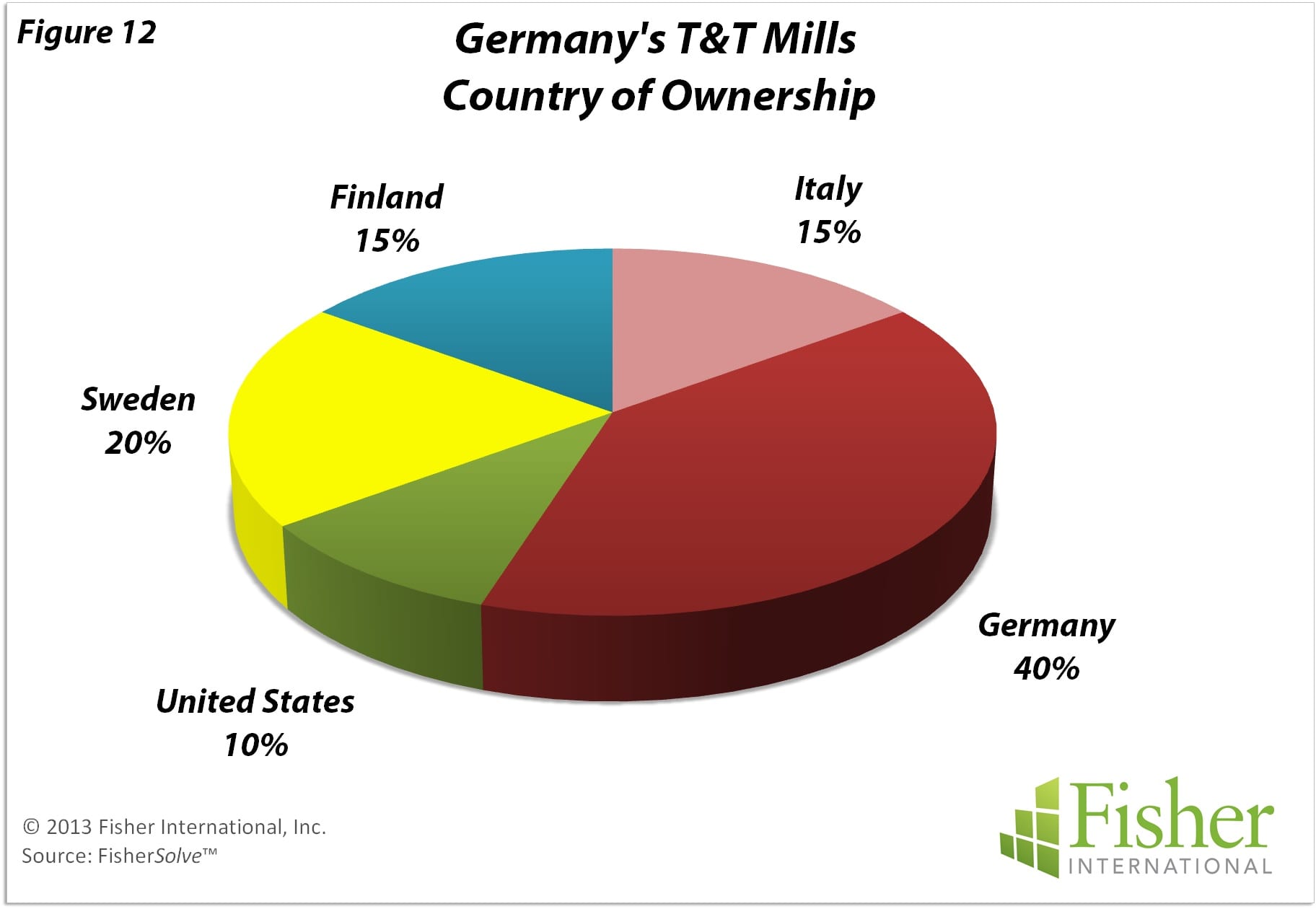 German T&T mills are geographically dispersed throughout the country with the largest concentration in the Rhine Valley (Map 1). Germany ranks second among T&T producers in the EU (Figure 2) and second in the number of operating machines (Figure 3). T&T machines in the EU vary from narrow two-metre machines to six metres. Machines in Germany are typical in terms of the trim range for the region, with the average being 3.6 metres (Figure 4). Mill production in Germany is, on average, on the high side compared to other producing countries in the EU at nearly 100,000 MT/Yr while the technical age of German machines is a little above average (Figure 5).

Machine speeds are respectable with nearly 70% of the machines above 1,500 mpm (Figure 10). Only 16% fall in the low speed ranges of less than 1,000mpm. On the international scale, capacity-wise, German machines bias above the average with a large proportion at very competitive capacities. Age of Germany’s machines has a wide dispersion above and below average (Figure 11). A noteworthy observation is that the German T&T business is international in ownership with 60% of the mills being headquartered outside of Germany (Figure 12).

The source for market data and analysis in this article is FisherSolve™. Data tables behind Figures 1 – 12 can be obtained from Fisher International. Email requests to [email protected]

Updated forecast puts Japan tissue growth at 6% in value and...