In Asia, the prices of softwood pulp are also now in a clear decline. In Europe, the availability of BSKP remains relatively tight and prices have been holding up relatively well.

The normal Q2 maintenance downtime is removing quite a few tonnes of pulp in both North America and Europe. On top of that, technical problems, most notably at the Pöls mill in Austria, also restrict the production volumes. Consequently, while the market BSKP demand was down in WE by more than 5% in Q1 – and even more in March – the supply/demand balance is pretty healthy and producer stocks were below normal at the end of March, at least.

In hardwood, shipments to the WE market were up in March year-on-year, while marginally down over the full first quarter. In Eastern Europe, volumes are small but growth good.

The risen producer stocks, coupled with the growing over-supply threat of hardwood pulp now that the badly delayed new capacity finally nears start-up in Uruguay and China has pressed the prices down in China but in Europe the impact has been limited.

The strength of the Euro helps, as does the tightness of the birch pulp volumes which has kept the prices for birch pulp in many cases above BEKP. The Euro weakened by 0.6% against the dollar from the previous week. The PIX BHKP index value in Euro moved back up by 1.85 euro, or by 0.34%, landing at 544.79 EUR/tonne. The PIX BHKP index value in dollars lost 1.84 USD, or 0.24%, and closed at 750.78 USD/tonne.

The improvement of the macro-economic fundamentals in the industrialised countries, especially in North America and Western Europe, appears to slow down the structural decline of the graphic paper sector. In March, the decline in printing and writing paper consumption was clearly smaller than in the earlier months with North American demand down by only 0.4% year-on-year and WE estimated demand down by 1.5% compared to the 3-6% declines typically seen over 2013 and in January-February 2014.

According to PPPC, the global demand for printing and writing paper was actually up by 1.1% for the month of March and +0.5% over the first quarter. On the other hand, the gains in other grades, in tissue and packaging have been smaller than what could have been expected.

April data is awaited for with keen interest as there is likely to be less impact from the adverse weather conditions which impacted the numbers during the first quarter. The very preliminary news from the market is mixed. It appears that some revival may have been seen in tissue and in cartonboards. On the other hand, the so far encouraging uncoated woodfree sector shipments appear to be down in North America quite considerably – but so is the capacity – and the capacity utilisation rates are reported to have been over 95% in uncoated free sheet.

In China, demand growth is muted and capacity expansion plans are being scaled down, especially in tissue. The government has revealed plans to close down 2.7 million tonnes of old, polluting pulp and paper capacity. This is less than what was the plan of the prior years. On the other hand, the enforcement of the earlier decided but not yet carried out closures may add to the number. 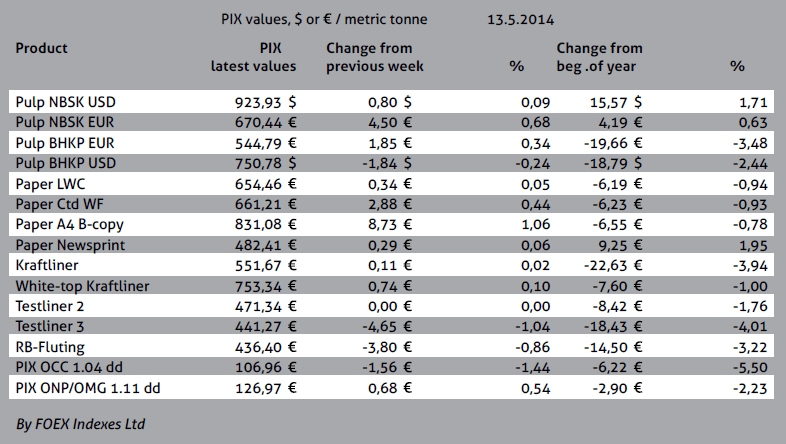