The new Andromeda converting technology is, manufacturer Futura believes, going to revolutionise the market. TWM reports on the claims.

It’s six months since Futura launched its new Andromeda converting technology for tissue roll products at It’s Tissue – and at least five orders are already on the books.

At the time of going to print, details of four of the five customers had yet to be announced, but it was confirmed in November that America’s Resolute Forest Products was to take delivery of the Andromeda Concept, with expected production start-up in the first quarter of 2017. Another line was destined for North America and another for Europe.

The technology was two years in development at the company’s FuturaLab in Lucca, Italy, where Futura chairman Fabio Perini and head of technology Giovacchino Giurlani built a full-size working demonstration plant to put Andromeda through its paces.

“The world is full of companies that believe they have reached the top and just sit down, and literally within months, without even knowing what happened to them, they collapse,” he says.

“Primarily because the market is like a bicycle race: following is always easier than leading. And then because, when you lose momentum, it’s not so easy to get it back. It’s a fact that squatters are not the best runners.”

Andromeda is suitable for roll tissue converting including wide (5.6m) lines. Breaking the concept down into sections, the first notable innovation is in parent reel handing. Due to a new-to-the-market integrated handling system, it can also load, unload and splice with “exceptional automation and safety, therefore delivering process continuity”.

Futura claim this is the first example in the industry of a technology which can position the jumbo roll (up to 3m diameter) on the unwind stand at the beginning of the converting line without manual intervention, including automatic chuck removal and insertion offering “considerable benefits in terms of safety and process runnability and continuity”.

The core business of space saving

Then there is Duplex, the double-head, high performance coremaker. Along with the new core accumulator, they are the essential components of the concept’s space-saving layout which Futura says is revolutionary.

Thanks largely to the integration of the core-making and accumulating aspects of the line, these do not take up the space next to the line which standard arrangements require. This allows two lines to fit within a width of 25m – which is significantly less than would normally be the case – up to 43m would be quite typical. The smaller building footprint trims down the capital expenditure aspect of a project and simplifies logistics and handling yield manpower savings. 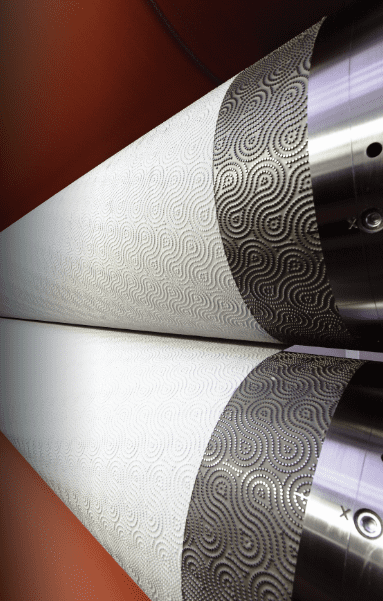 A control room for converting?

These manpower savings are enhanced by automation and process control. Much of the line’s operations, or indeed of two separate lines’ operations, are managed from a separate control room. Giurlani adds that this is a new concept for roll products converting, being similar to what you would expect for a tissue or papermaking line rather than a converting plant.

The control room reduces physical contact with the process but provides an unparalleled overview of the operation thanks to an HD camera system. “The control room concept has the potential to change the way lines are operated, thereby setting new market standards in automation and safety,” he says.

The ProCare technical support functions including the mobile ProTablet which are fully integrated with the control room and make full use of the smart camera system for diagnostics.

“ProTablet is part of the control room,” says ProCare manager Alessandro Viani, “and innovations relating to ProTablet, which we will announce at Tissue World in New Orleans in 2016, will be important features of the first Andromeda lines to be installed.”

The concept also encompasses Futura’s printing, embossing and cutting technologies. JOI embosser, for example, features the Tango Roll which is claimed to require less maintenance than standard options. There is no re-embossing effect, perfect inner ply definition and simplified cleaning.

Giurlani adds the concept is also inherently safer in its functionality, allowing better working conditions for operators and maintenance staff. “It scores very highly for Overall Equipment Effectiveness, combined with quality consistency and more efficient use of manpower.

Overall, we are convinced that it represents a better way to make roll products in all respects. Now that people have seen the concepts in action, they can see their positive impact in a commercial context. For us, the Andromeda Concept represents the beginning of the way that leads to the future of converting.”