The Benelux Countries (Belgium, the Netherlands and Luxemburg) represent good trading partners in the European Union (EU). Belgium and the Netherlands (the only towel and tissue producers) both have a solid manufacturing base and robust agriculture business that trade extensively within the EU. Neither country is rich in natural resources making their economies vulnerable to volatility in world markets.

The Benelux towel and tissue (T&T) business is modest compared to countries like Germany and Italy, making 0.3 million MT/Yr. versus Germany at 1.4 and Italy at 1.8 MT/Yr. Despite recent relative improvements, the 2008-09 global economic crisis is having lasting impact on the financial sector leaving the Benelux countries increasingly vulnerable to spillover from euro-zone turmoil. The T&T business was fairly stagnant or shrinking slightly leading into the 2009 recession and has experienced further reductions in capacity since (Figure 1). 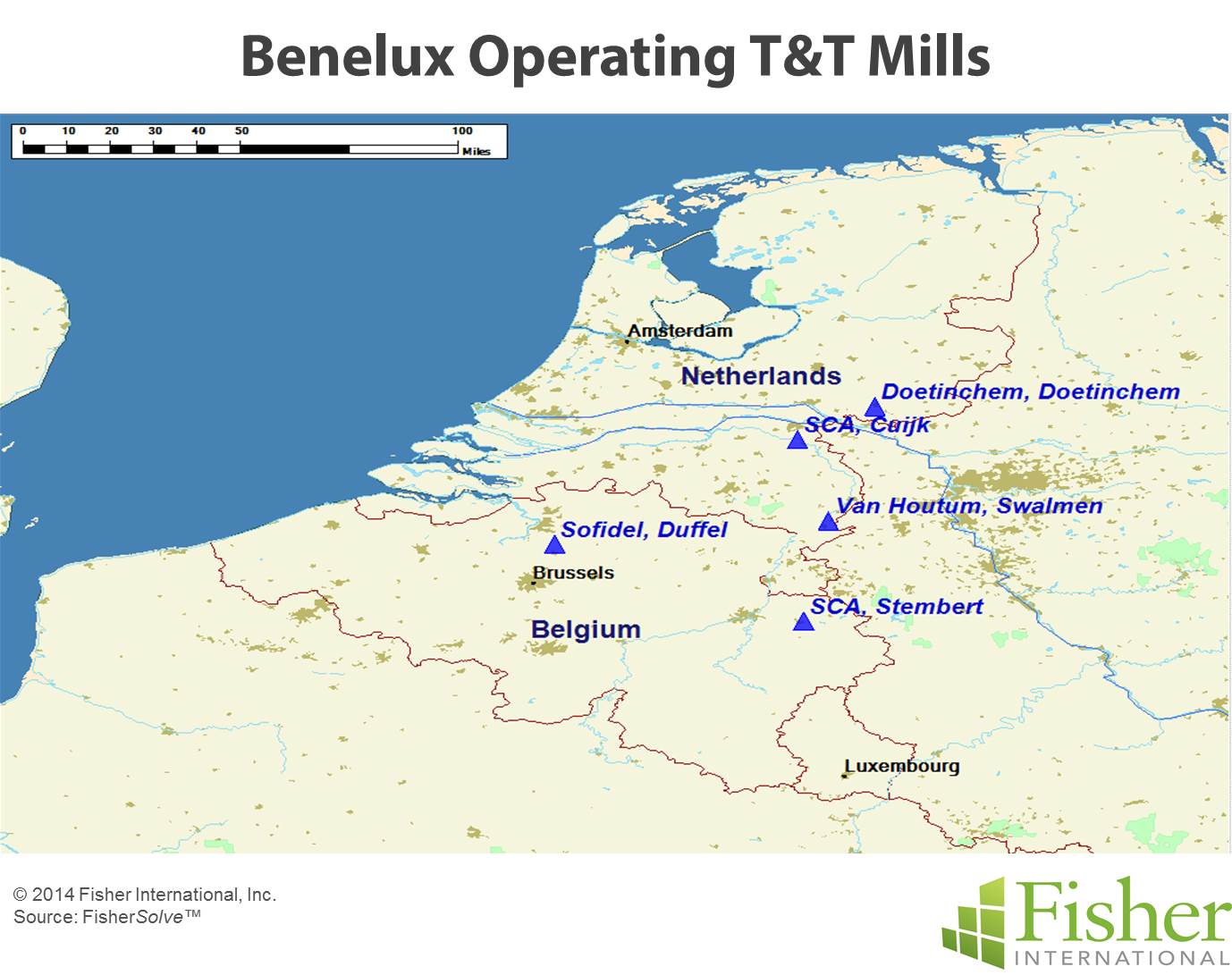 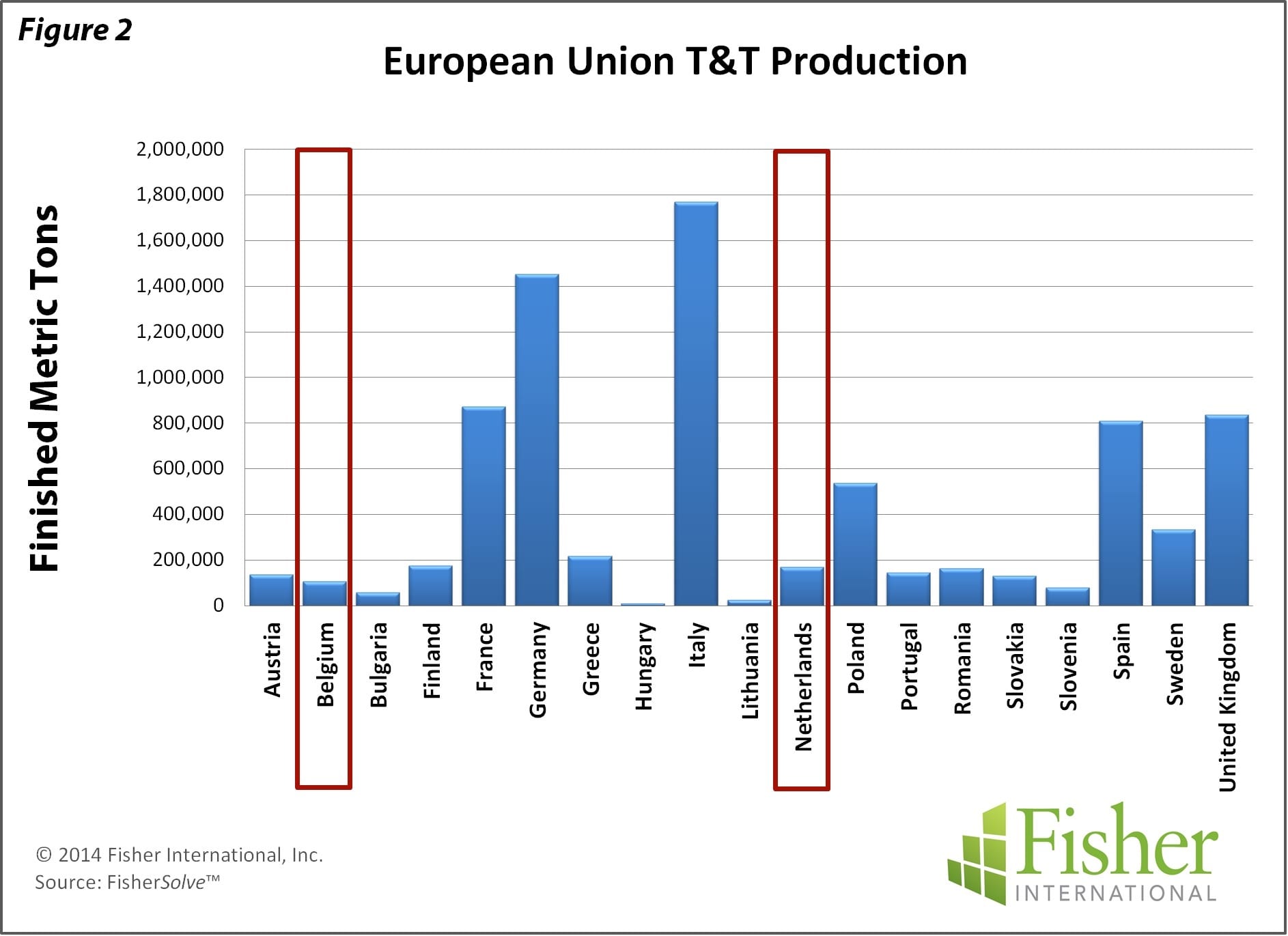 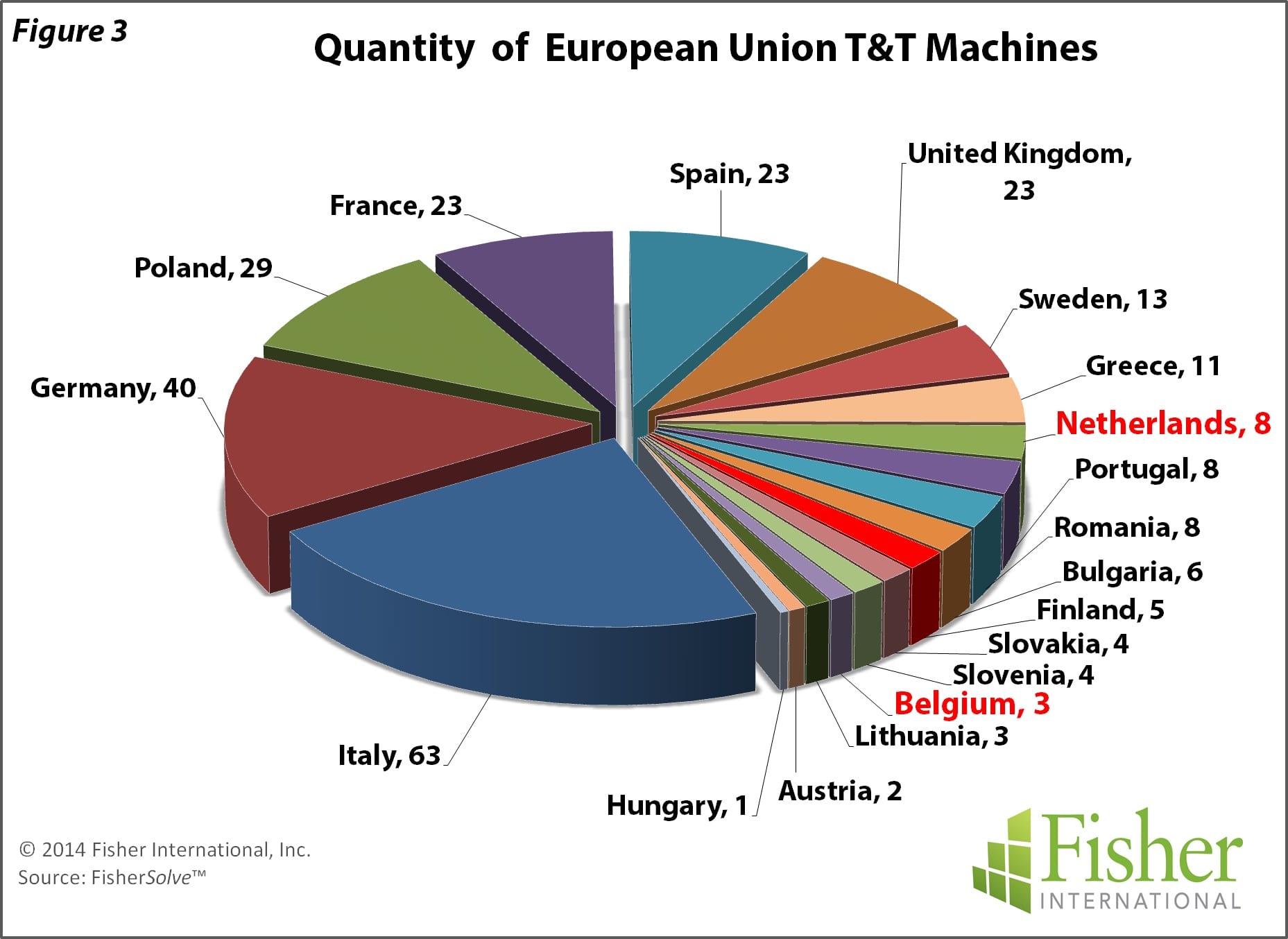 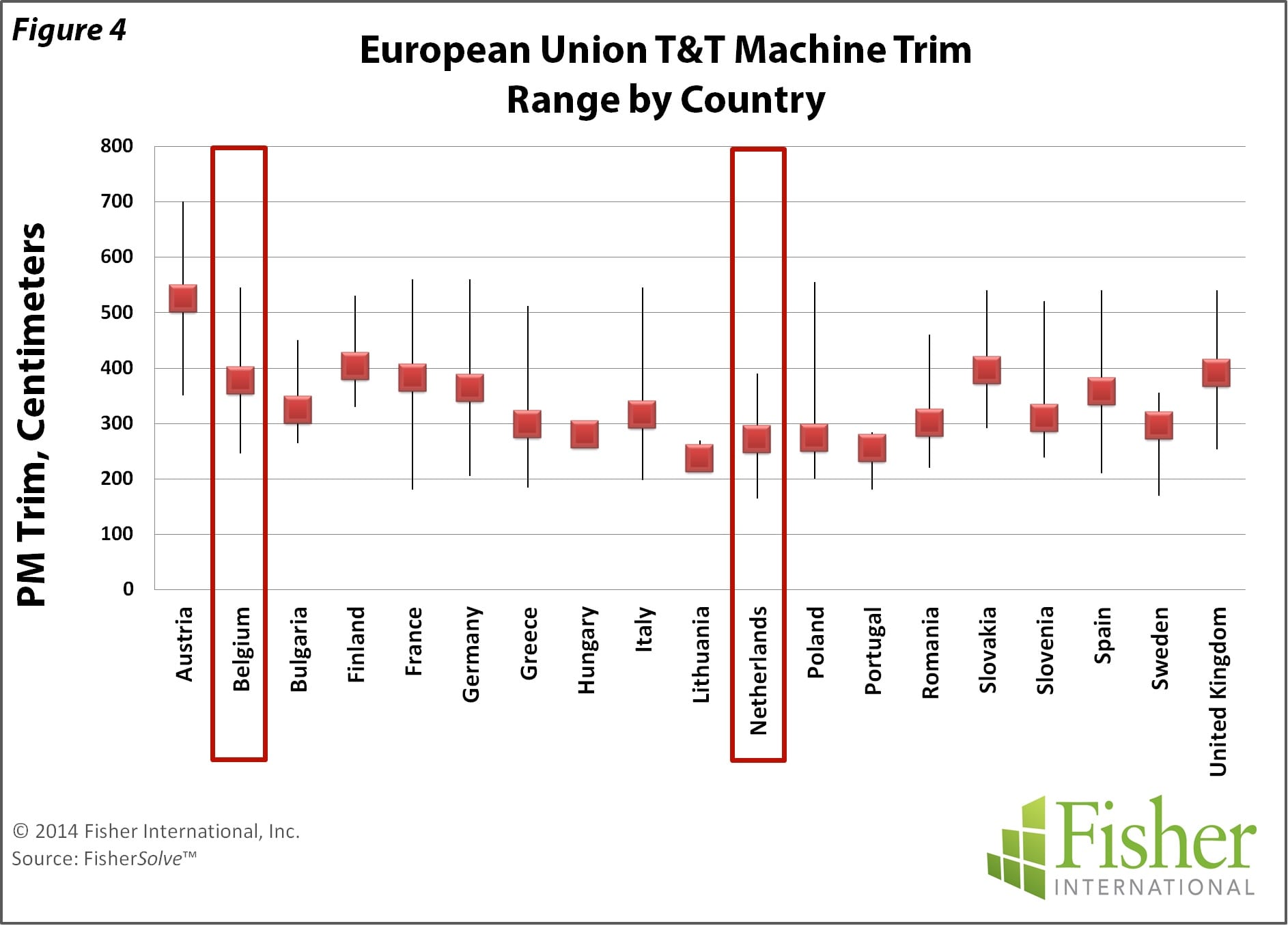 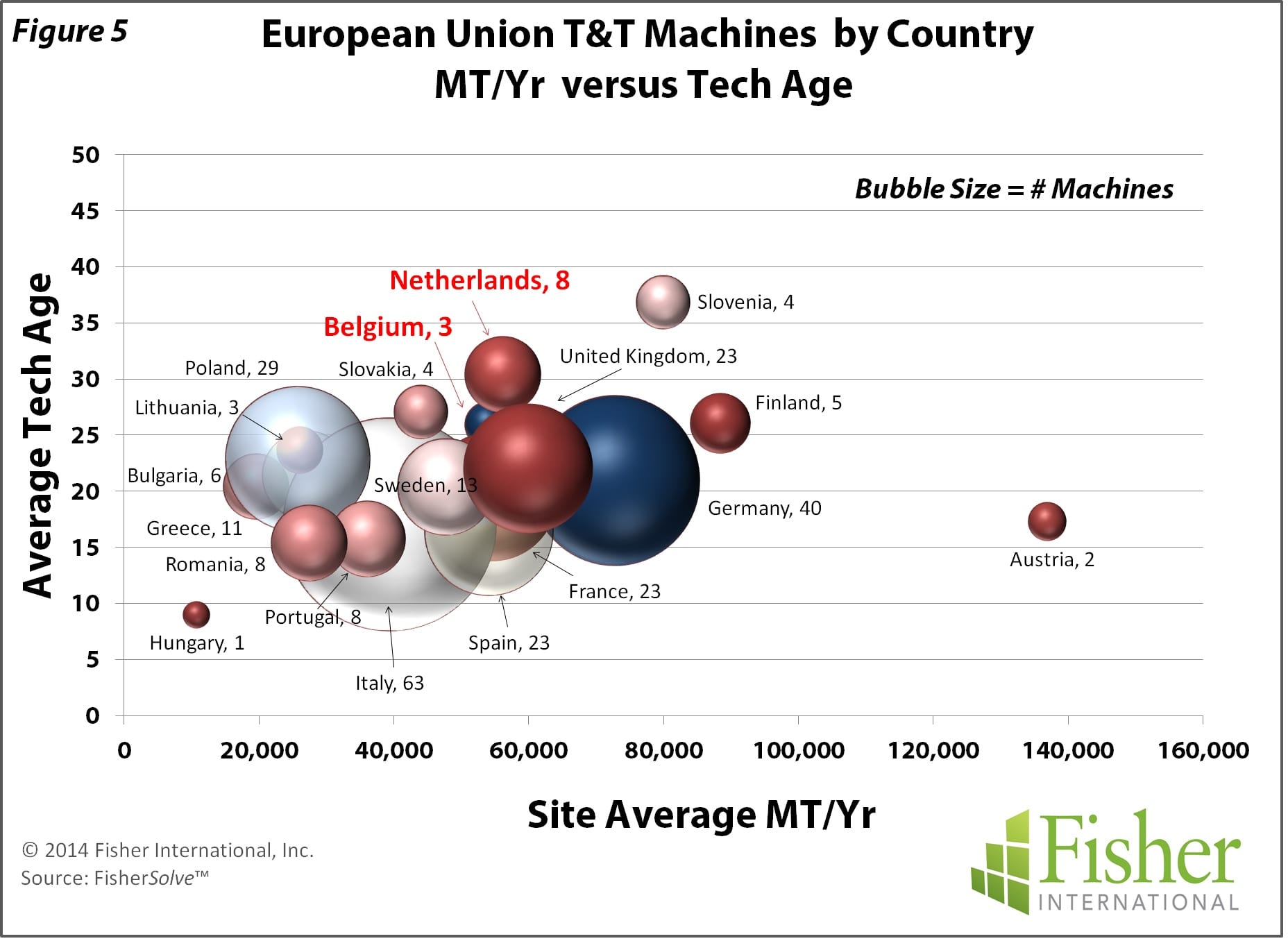 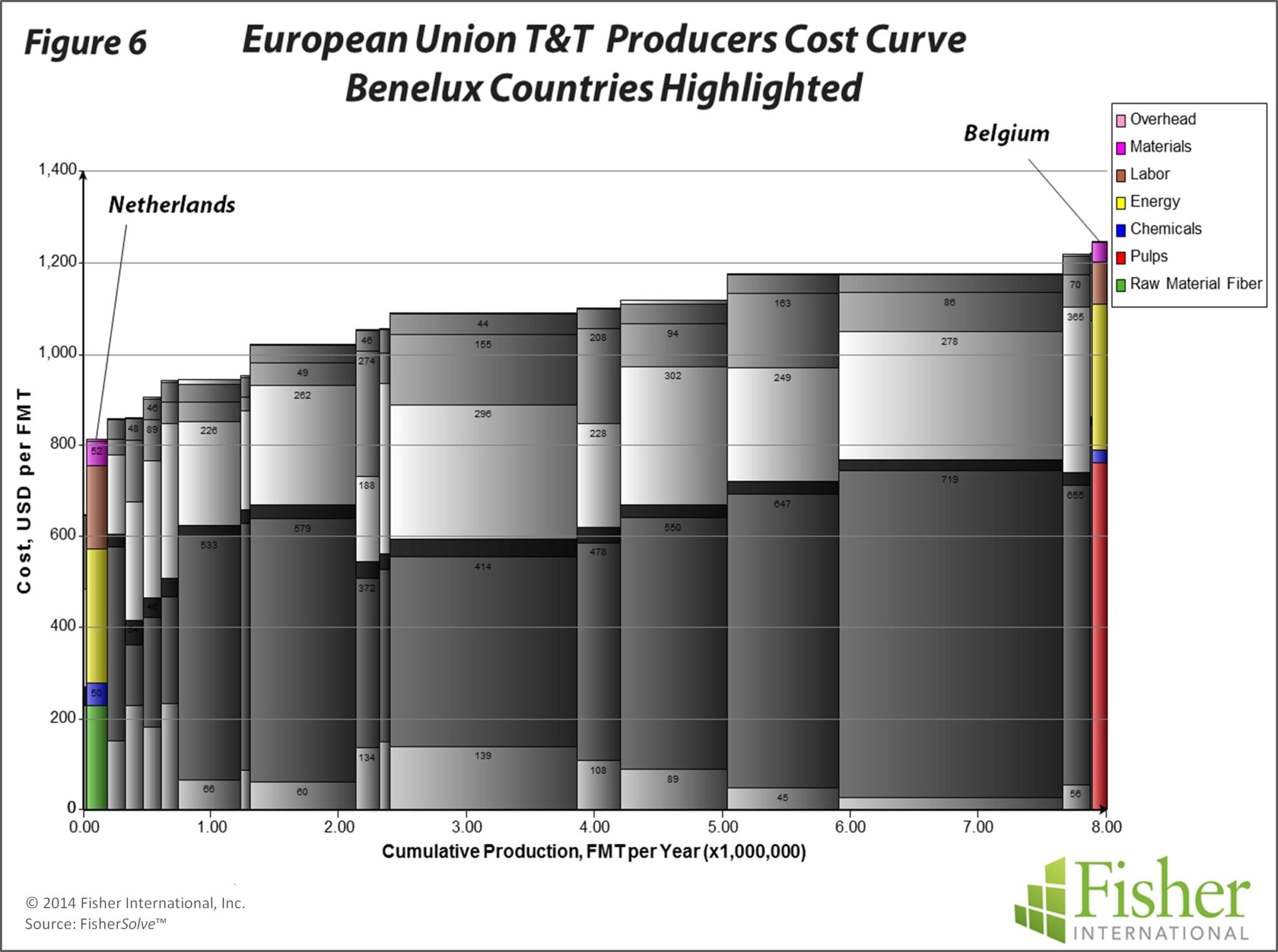 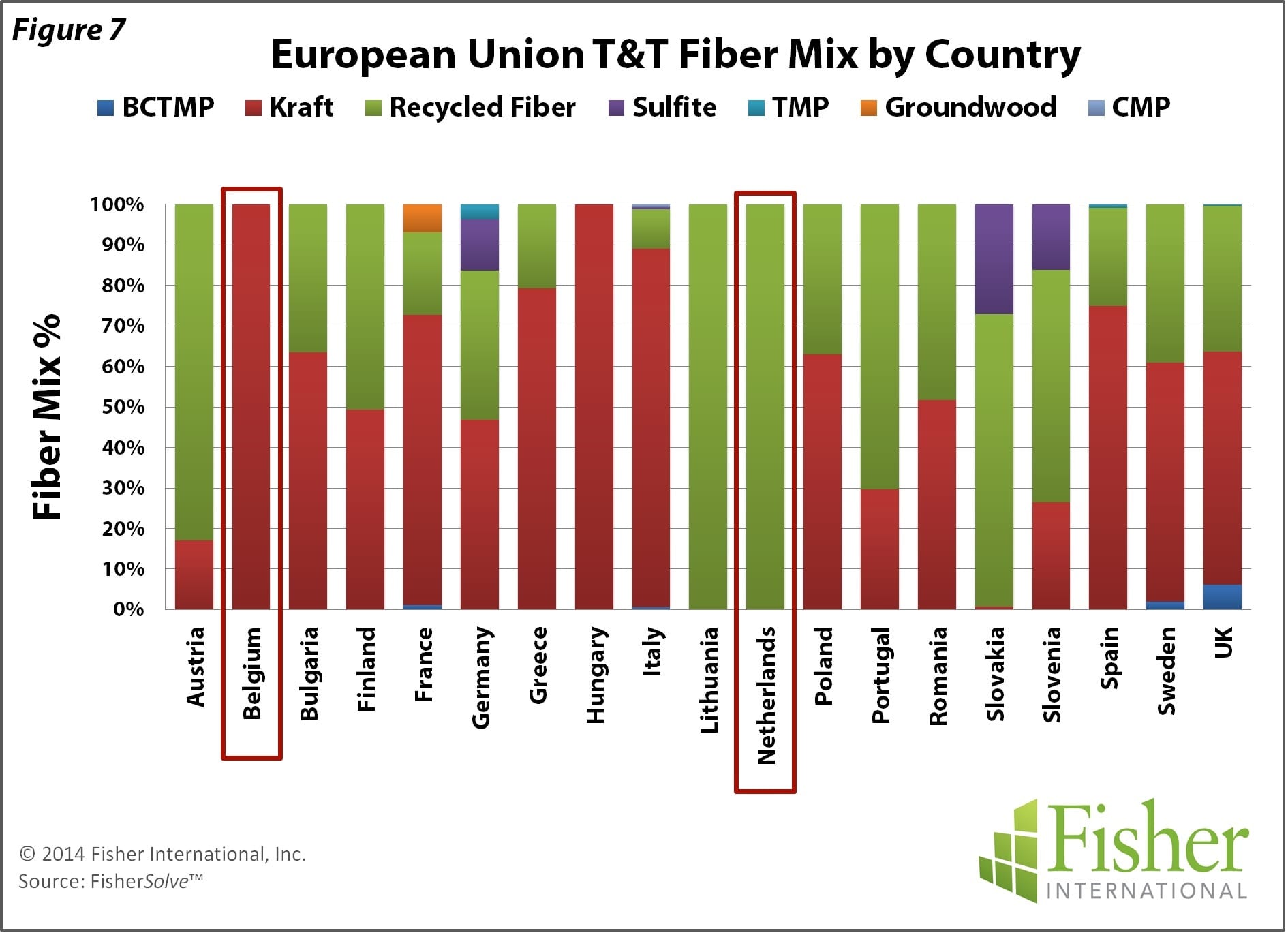 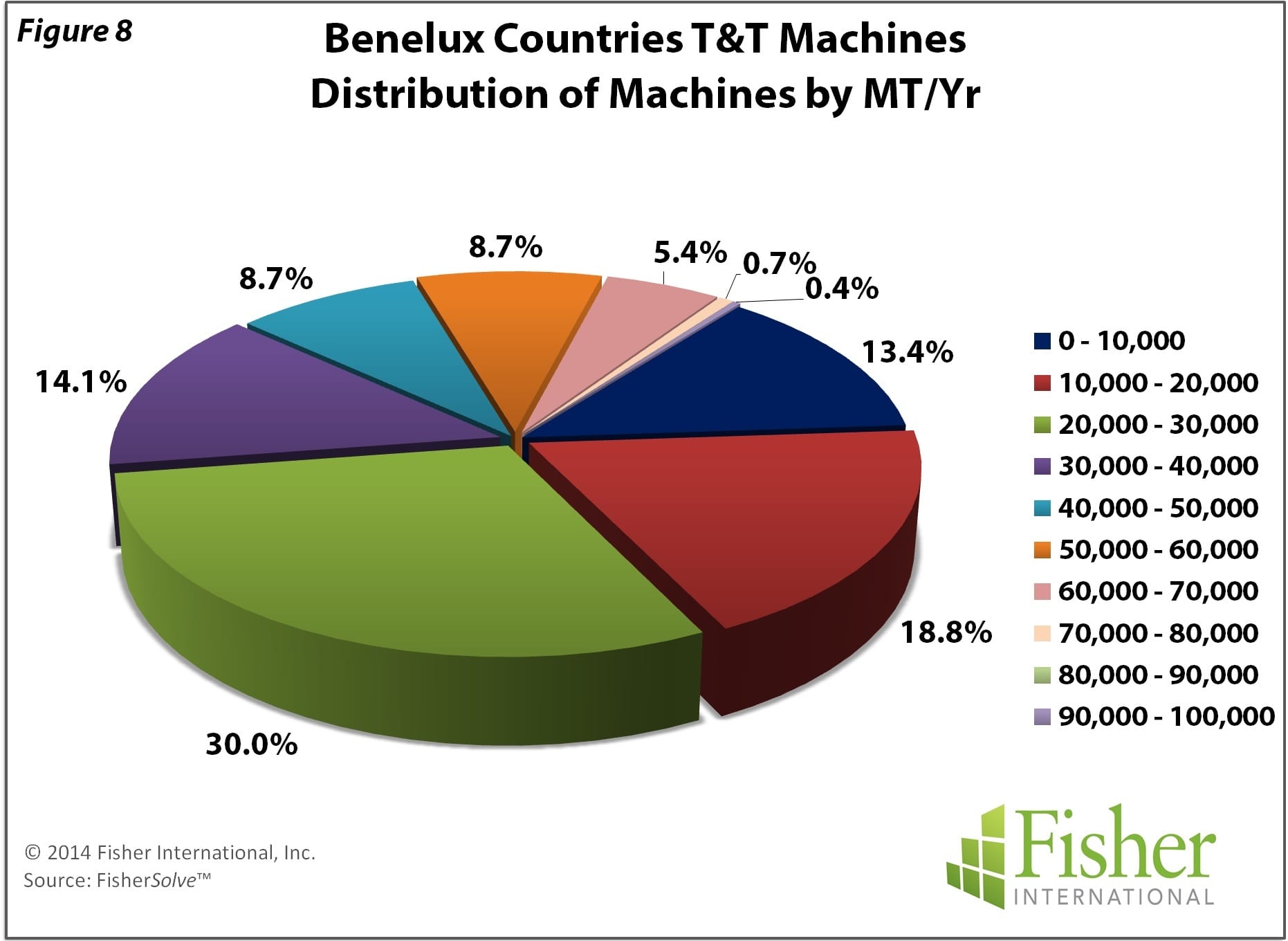 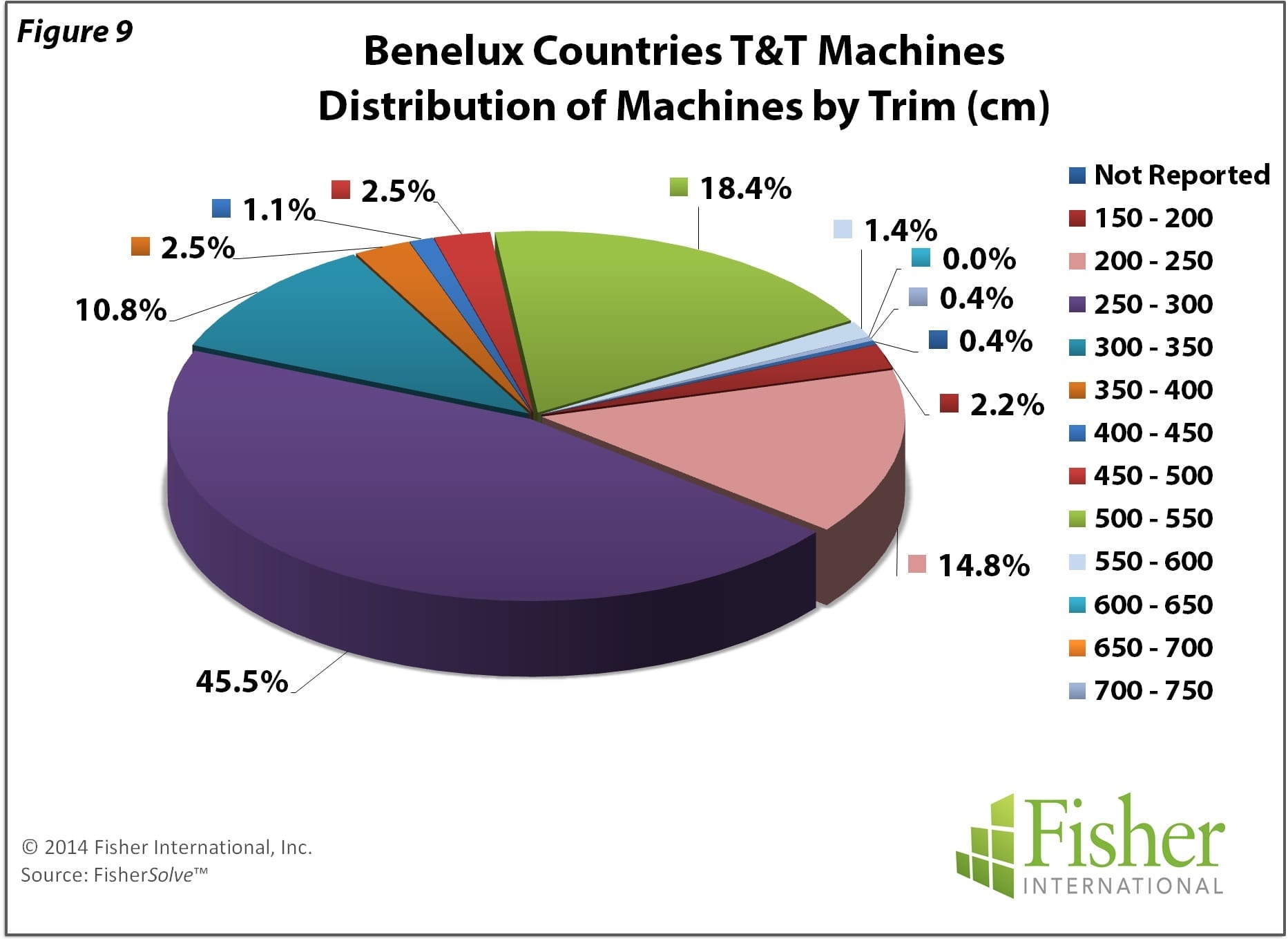 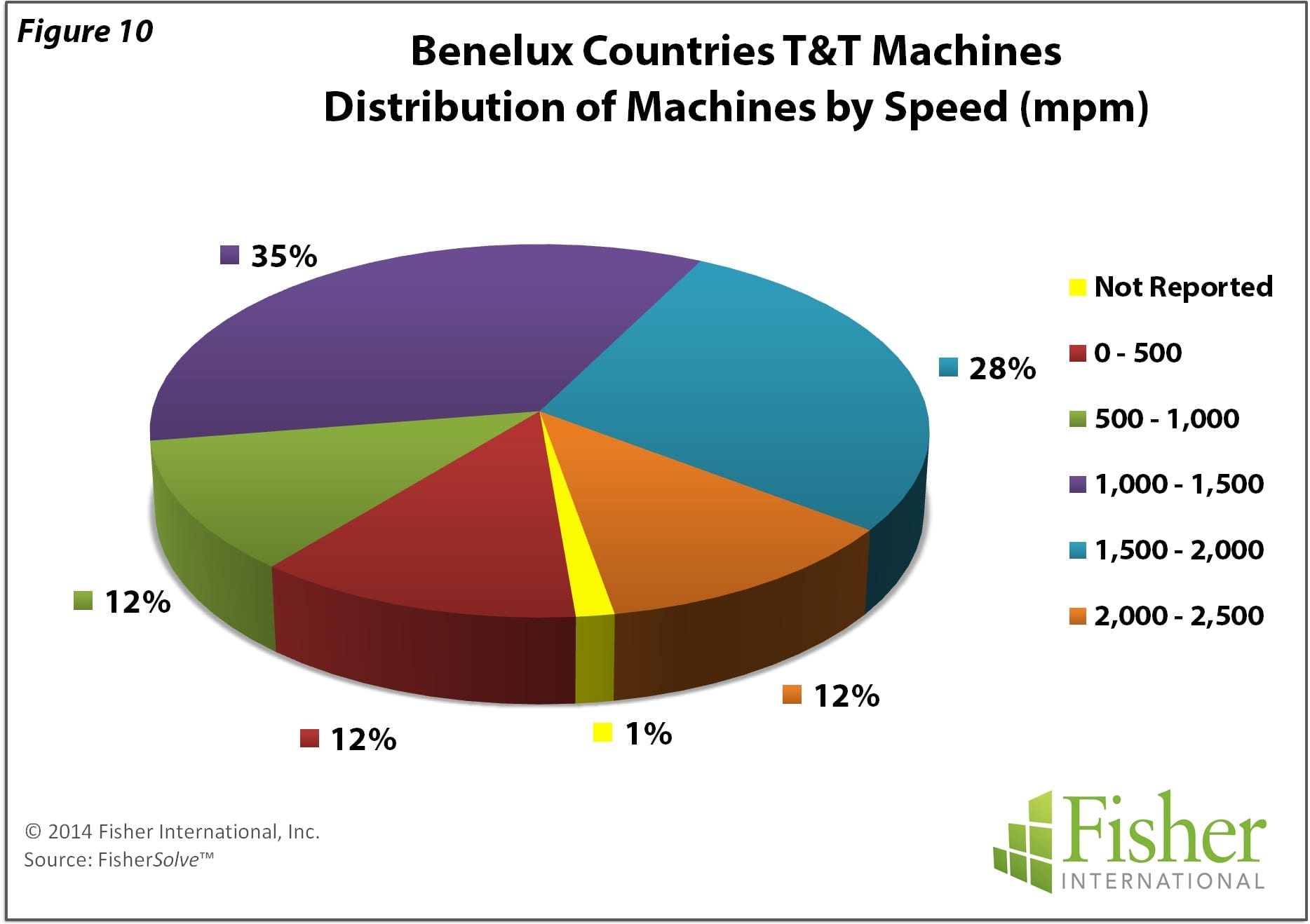 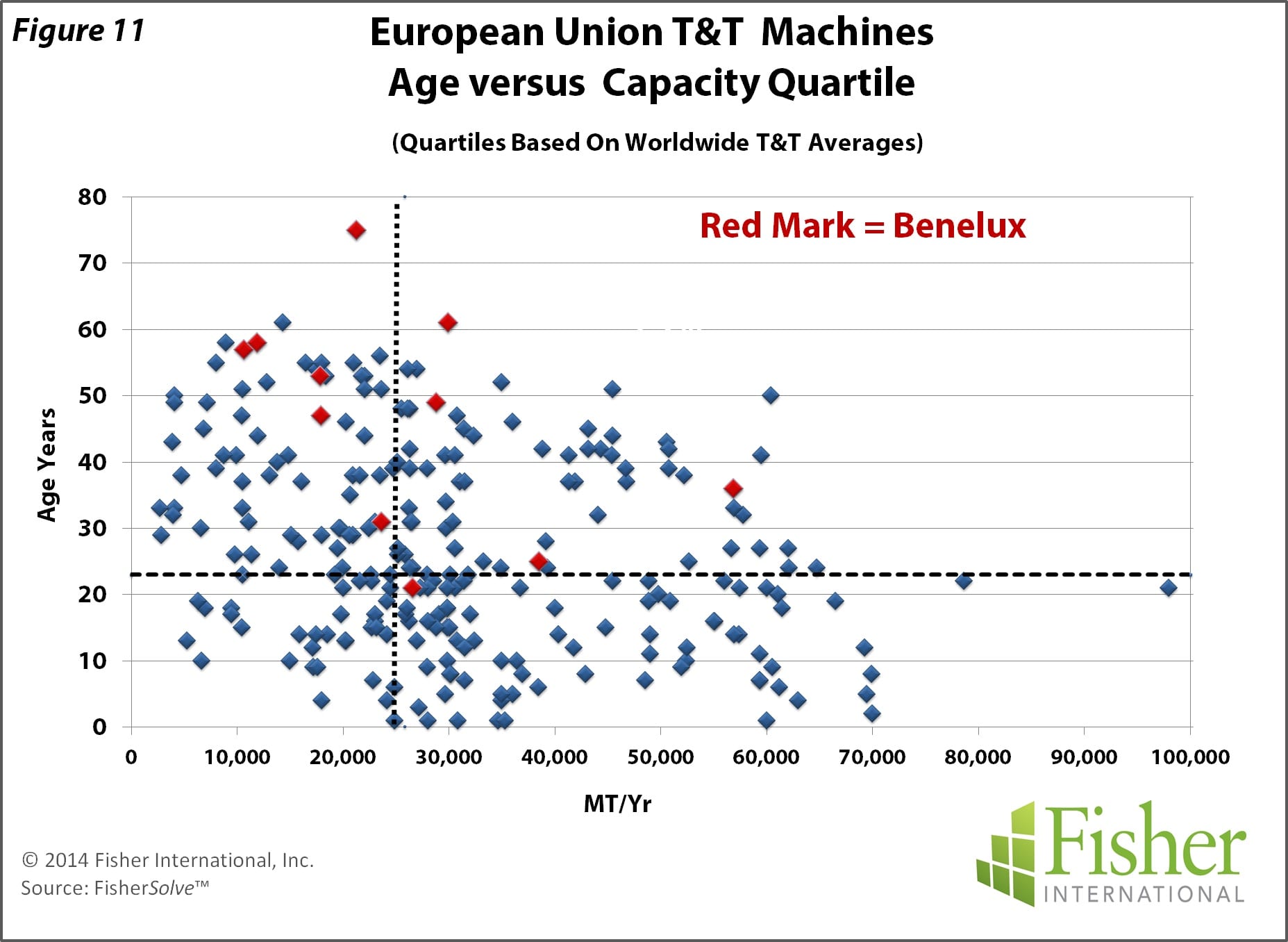 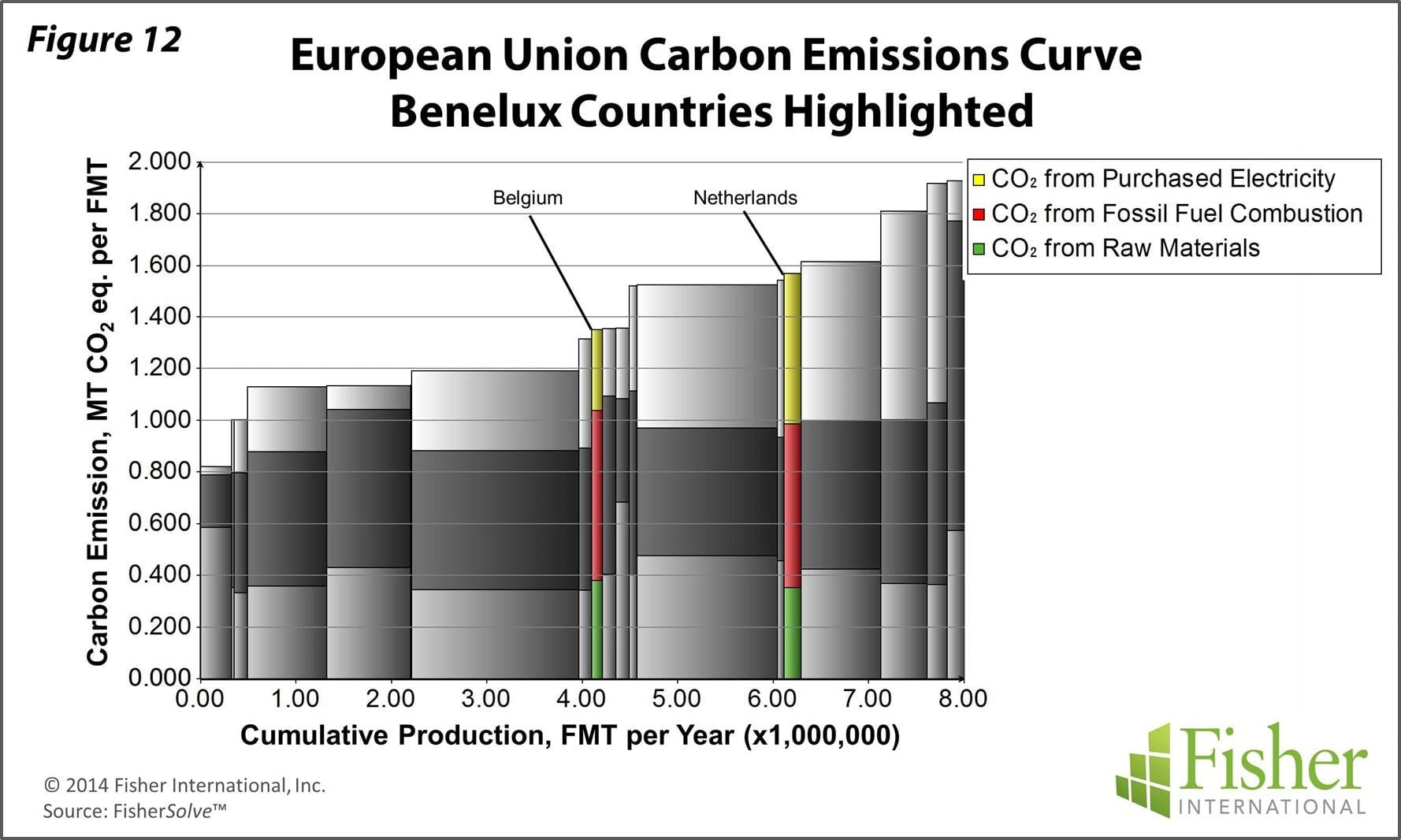 Benelux T&T mills are geographically dispersed throughout Belgium and the Netherlands (Map). Luxemburg does not have a T&T presence. Combined, the Benelux countries have a small presence in EU T&T capacity ranking behind seven other countries in the EU (Figure 2) and tied with Greece for eighth in the number of operating machines (Figure 3). T&T machines in the EU vary from narrow two-metre machines to six metres. Machines in Belgium are typical while those in the Netherlands are on the narrow end in terms of the trim range for the region, with the average for Belgium and the Netherlands being 3.7 and 2.7 metres respectively (Figure 4). Mill production in Benelux is average compared to other producing countries in the EU at nearly 55,000 MT/Yr while the technical age of machines is above average (Figure 5).

‘Combined, the Benelux countries have a small presence in EU T&T capacity ranking behind seven other countries in the EU and tied with Greece’

Benelux’s cost position in the EU represents high and low extremes. Belgium’s cost is highest in the EU due mostly to reliance on purchased market pulp. The Netherlands is on the other end of the cost curve thanks to the low cost of recycling fibre (Figure 6). Fibre mix in Belgium is 100% market Kraft pulp; in the Netherlands it is 100% recycled (Figure 7). While recycled fibre is present in most countries, only three other countries are at or approaching the level of usage found in the Netherlands.

Benelux T&T machine production rates bias machines producing at the lowest range – less than 40,000 MT/Yr. Only a small percentage of machines are at moderate levels, producing in the 40,000 – 60,000 MT/Yr range (Figure 8). Machine trims are narrow with almost three quarters of the machines being less than 3.5 metres (Figure 9).

‘Mill production in Benelux is average compared to other producing countries in the EU at nearly 55,000 MT/Yr while the technical age of machines is above average’

Machine speeds are also modest with only 40% of the machines above 1,500mpm (Figure 10) and only 12% at world-class levels above 2,000mpm. On the international scale, capacity-wise, Benelux machines are fairly evenly split below and above average but only one bumps into the top-producer range. Benelux machines are widely dispersed in the above-average range with regard to age; only one machine is below the worldwide average (Figure 11).

100% Market kraft pulp in Belgium. Recycled fibre in The Netherlands.

Worldwide, there is increasing interest in carbon emission from various industrial sources including paper production. Fisher International has recently added a carbon database and benchmarking tool to its FisherSolve™ modelling of the pulp and paper industry. Carbon modelling results for the EU indicate a weighted average of 1.363 MT CO2 eq/FMT for cradle to gate emissions. Comparatively, worldwide weighted average for T&T is 1.613 MT CO2 eq/FMT. The two Benelux countries are at or slightly above the EU average but below worldwide (Figure 12).

[box] About Fisher International, Inc. Fisher International has supported the pulp and paper industry for over 25 years with business intelligence and management consulting. Fisher International’s powerful proprietary databases, analysis tools, and expert consultants are indispensable resources to the industry’s producers, suppliers, investors, and buyers worldwide. FisherSolve™ is the pulp and paper industry’s premier database and analysis tool. Complete and accurate, FisherSolve is unique in describing the assets and operations of every mill in the world (making 50 TPD or more), modeling the mass-energy balance of each, analyzing their production costs, predicting their economic viability, and providing a wealth of information necessary for strategic planning and implementation. FisherSolve is a product of Fisher International, Inc. For more information visit: www.fisheri.com or email [email protected] USA: +1-203-854-5390 [/box]