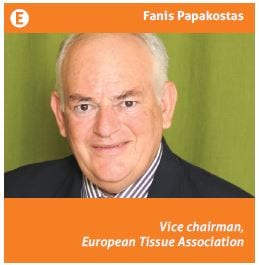 The tissue industry was stunned in November 2016 to hear that the EU College of Commissioners was considering not renewing three Ecolabels, including one of the most successful – the Ecolabel for tissue.

This Ecolabel is a credible way for the tissue industry and those associated with it to show environmental excellence.

Objections have been raised to the College of Commissioners´ proposal, not only by industry, but by the environmental and consumer NGO’s as well as the retail trade. In December 2016, representatives for European paper manufacturers, retailers and wholesalers, consumer organisations and environmental NGOs, wrote to the European Commission concerning the possible discontinuation of EU Ecolabel product groups.

Concerns have also been raised in the Council of Ministers, however to date there has been no movement on the proposal.

The tissue ecolabel is due for renewal next year. JRC, the body working on the update for tissue, indicated that as there is no clear path ahead, but following a political orientation not to renew the tissue ecolabel, it has stopped work on this category.

They have indicated that if the situation changes they will restart the work on the ecolabel for tissue.

Many of the stakeholders wrote to the commission asking for the proposal to be reconsidered. In its response, the Commission made no further comment apart from the information that already had been given:

“On 25 October 2016, the College of Commissioners decided that the voluntary Ecolabel would not be extended after it expires for certain products where there has been limited interest from business and industry.

“The College also decided that for certain other products, for which the Ecolabel expires in 2017-2018, a decision on the prolongation, review or withdrawal of the Ecolabel will be taken on the basis of the Regulatory Fitness and Performance Programme (REFIT) exercise.

“The results of this Regulatory Fitness Check are expected to be presented in the first half of 2017”.

It is important to note that no further action by the Commission will automatically end the tissue ecolabel on the 31 December 2018.

As these proposals should be evidence based, there have been requests to see the evidence supporting the plan and to make the process transparent. So far, we have not had a response to a number of requests.

Industry has asked for the relevant minutes of the meeting where the proposal was announced. The minutes were received, but the crucial section explaining the thinking behind the Commission’s plan was redacted.

The exclusion was made on the exceptional grounds that “ongoing work regarding a matter on which the Commission has not yet taken a decision and its disclosure would seriously undermine the institution’s decisionmaking process”. Thus, the parts relevant for industry have been masked.

The impact of this proposal will have ramifications for both the tissue industry and the environment:
• From the tissue industry’s perspective, the EU Ecolabel tissues are among the most successful Ecolabels, generating several billions of Euros in sales every year. Companies have invested significantly in plant and equipment to be able to use the EU Ecolabel on their products. Any disruption would incur extra costs. The label also helps companies market their products across the EU and allows access to green public procurement contracts with fewer administrative burdens.

• The Ecolabel empowers EU citizens to make sustainable purchases thanks to around 40,000 environmentally friendly products and services which carry the label. Consumers facing a wide variety of labels demand a reliable and trusted system. The repeal of the EU Ecolabel for tissue is likely to result in requests for private (retail) or national labels. Such schemes are likely to all have slightly different criteria and  potentially could contain protectionist national features, hampering the functioning of the EU single market. This will add significant complexities to the production, marketing and sale of tissue products in Europe.

• Environmental benefits would be reduced as narrowing the scope and the uptake of the scheme will undermine its positive effects as a sign-post for sustainable production. It would also make it more difficult for companies to ensure they focus their limited resources on the developments which are best for the environment. The tissue industry has fought hard to  establish its sustainability credentials and Ecolabels are an important part of their programmes, hence the high uptake by companies.

This action may well disrupt this strategy and at worst slow the action by industry, as they cannot be sure of the next best steps forward to continue improving the sustainability of their products.

There is hope that the concerted effort of the Industry, consumer groups, retailers, environmental NGO’s as well as member states via the Council of Ministers will result in the Commission renewing the ecolabel before the end of 2018.

The tissue industry has always been supportive of a transparent EU Ecolabel based on scientific criteria, developed by well-known and respected scientific institutes.

It is important to provide clear criteria for the tissue industry and guidance to consumers.