Russia’s economy has been experiencing sustained expansion since the collapse of the Soviet Union. Fuelled by commodity exports (most notably natural gas and oil) economic growth was averaging around 7% per year until the global recession of 2008-2009 slowed it to its currently projected 2.5%. Prior to this, investments in Russia, including pulp and paper in general, were on the rise but Russia’s involvement in the Ukraine conflict is resulting in further pressure on the economy and growth could continue to drop or stop completely. 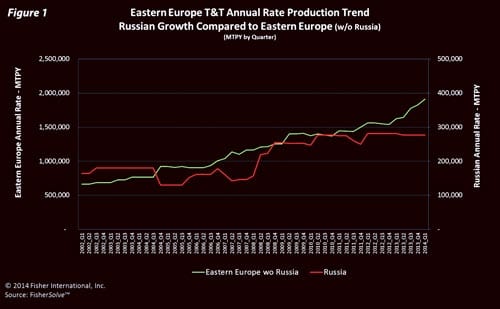 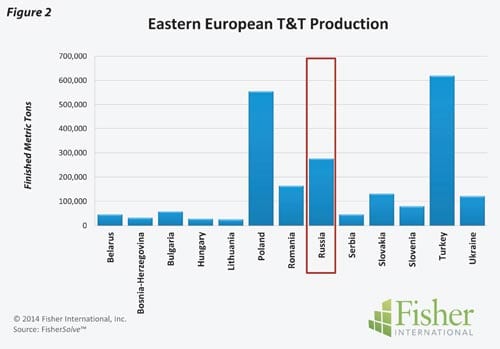 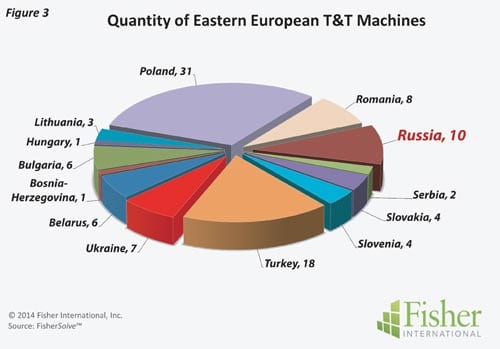 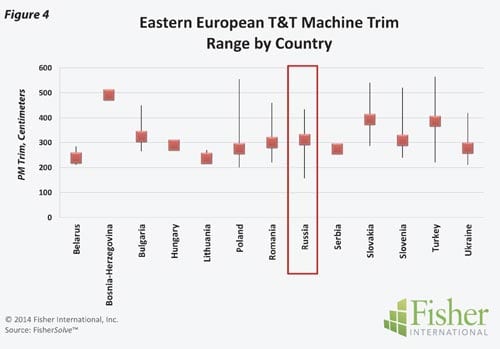 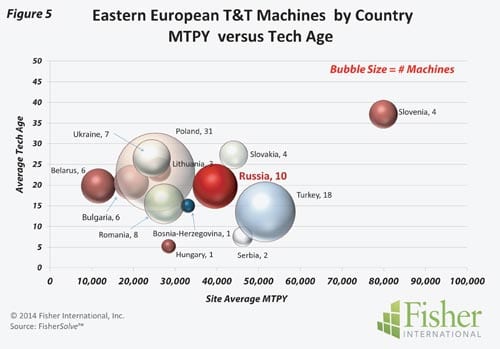 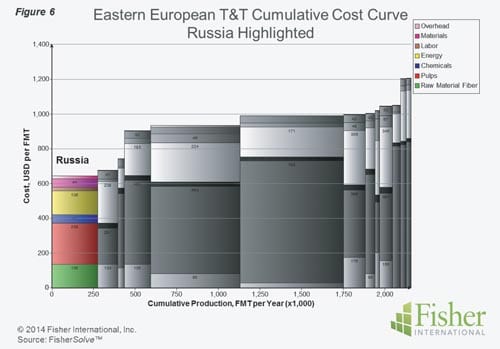 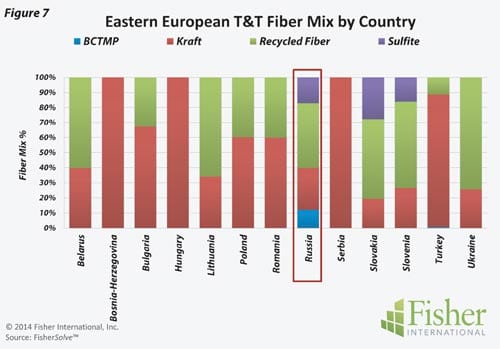 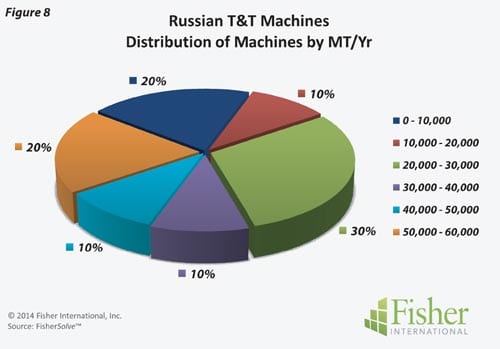 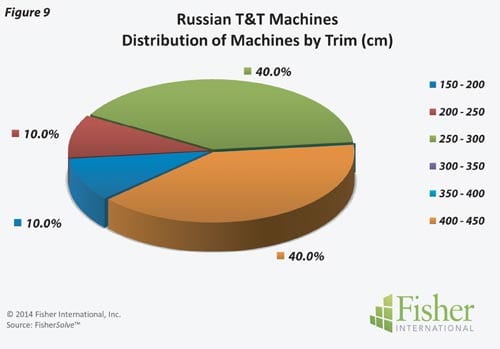 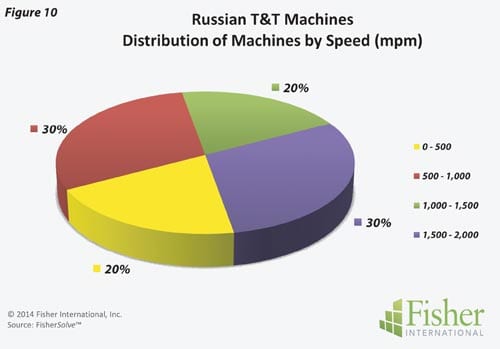 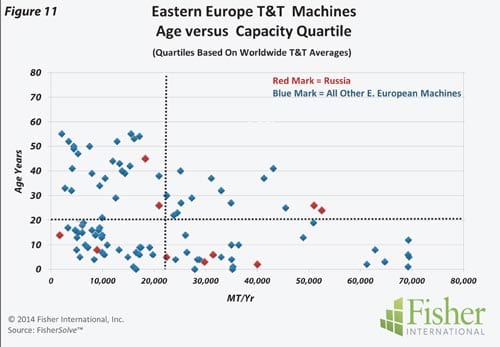 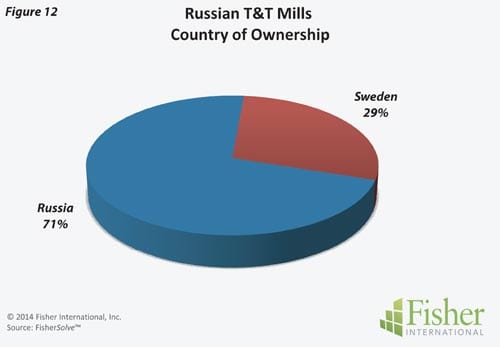 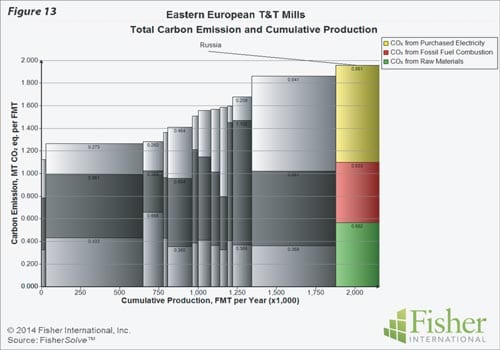 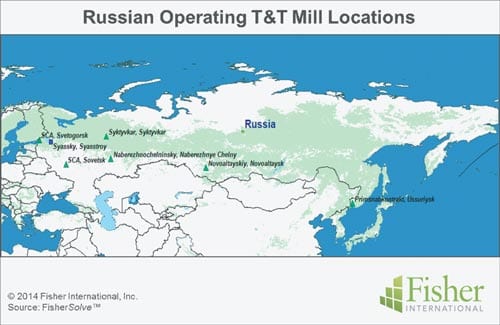 Towel and tissue growth has lagged behind the general economy leading up to the 2008-2009 recession. Compared with Eastern European countries where growth in the last 10 to 12 years has been steadily rising, Russia’s has been relatively modest (Figure 1). Russia is the most populous country in Eastern Europe. With a population of 142+ million and abundant energy and forest resources it could have a strong forest products and T&T industry, but it ranks last in per capita T&T production in the region. 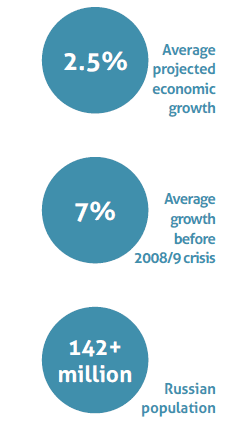 Russia’s T&T mills are geographically located in the more populous Western part of the country with only one mill each in the Central and Eastern regions (Map). Russia ranks 3rd in the number of operating machines outnumbering most, albeit much smaller, countries but this is significantly fewer than the two highest producing countries (Figure 3).

T&T machines in Eastern Europe vary from narrow two-metre machines to six metres, and while machines in Russia are similar in terms of the trim range they are lacking in width compared to others in the region (Figure 4). Machine production in Russia is a little above average compared to other producing countries in Eastern Europe at nearly 40,000 MTPY, as is the technical age of Russian machines with an average of about 20 years (Figure 5).

Russia’s cost position is very strong in Eastern Europe; it is the low-cost producer by a good margin. Much of this is driven by advantageous energy and pulp costs (Figure 6). Fibre mix in Russian mills is 40% recycled fibre with the remainder being market Kraft, Sulfite and CTMP (Figure 7).

Russia’s T&T machine production rates are fairly well distributed ranging among the smallest to the regional highest making 40,000 MTPY. Only 20% of the machines are among the more capable machines producing above the 50,000 MTPY range (Figure 8). Machine trims are narrow with half of the machines being less than 3.0 metres (Figure 9). There is no machine wider than 5.0 metres.

Machine speeds are split at 50/50 for machines below and above the 1,000 mpm mark (Figure 10). Only 30% are running above 1,500 mpm. Competitively, Russian machines regionally are somewhat newer and following the regional dispersion in size.

Worldwide, the machines are also somewhat newer and well distributed in capacity (Figure 11). While Russia’s T&T business is international in ownership, external investments are limited to two Swedish mills (Figure 12).

Russia’s low cost position on the Cost Curve is not repeated on the Carbon Emissions Curve. Russia ranks highest in modelled emissions levels with the heaviest contribution coming from energy and materials (Figure 13).

Fisher International has supported the pulp and paper industry for over 25 years with business intelligence and management consulting. Fisher International’s powerful proprietary databases, analysis tools, and expert consultants are indispensable resources to the industry’s producers, suppliers, investors, and buyers worldwide.FisherSolve™ is the pulp and paper industry’s premier database and analysis tool. Complete and accurate, FisherSolve is unique in describing the assets and operations of every mill in the world (making 50 TPD or more), modeling the mass-energy balance of each, analyzing their production costs, predicting their economic viability, and providing a wealth of information necessary for strategic planning and implementation. FisherSolve is a product of Fisher International, Inc. For more information visit: www.fisheri.com or email [email protected] USA: +1-203-854-5390.