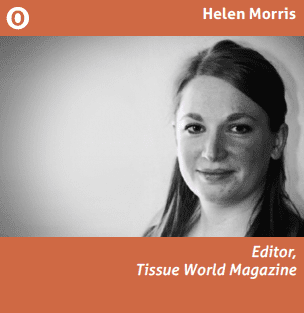 It was the glaringly obvious thing for us to do to follow our inaugural TW Istanbul conference with a country report on Russia.

The two countries have strong geo-commercial links and are posting enviously healthy tissue growth figures – 11% in Turkey, anything up to 21% in Russia, which is the figure for luxury tissue products.

Russian consumers have a particular fondness for perfumed products. There is no reason why that fact seems slightly at odds with my admittedly narrow experience of the country, but it does.

It reminds me of that other BRIC nation Brazil, where perfume is nothing short of an obsession, and that other word which links all three of these countries: potential. Russia has five times the growth potential of European average consumption levels, and all the indicators are favourable.

Notwithstanding the current stresses in global and regional economies – the checks and balances of which were so clearly laid out for us in Istanbul by Oxford University’s Andrea Boltho – Russians have more disposable roubles in their pockets.

There are a few big boulders on the growth path. The Ukraine crisis is putting further pressure on an economy that has already stalled over the past few years – in 2013 its economic growth was 1.3% compared with 8.5% in 2007. It has the greatest socioeconomic disparities in Eastern Europe and consumption per capita is underdeveloped.

Its tissue market is nowhere near mature. Russia represents just 13% of Eastern European production and ranks just 18th, which is low compared to other countries with similar resources and populations. Its T&T mills are geographically located in the western part of the country with only one mill each in the central and eastern regions.

But the crux of Russia’s potential is that, even while its economy has been stagnating, its tissue industry and consumer base have been experiencing a series of new and crucial trends. Following years of the Soviet Union when tissue was scarcely available, more and more Russians are experiencing a significant shift from poverty to average income, and it’s predicted that this trend will remain the same in the next five years to form a strong middle class.

Historically, tissue quality has been low but these changing trends have resulted in a desire for luxury products such as tissue and towel. Coloured and scented toilet paper is also popular.

Advantageous energy and pulp costs mean its cost position is very strong. Russia is also the most populous country in Eastern Europe at 142m+, and its sheer size – 9,000 km from west to east that include nine different times zones – means it offers the biggest potential in Eastern Europe.

At first glance, Tissue World Istanbul was a success because of the 306 tissue professionals who attended from key tissue areas including Turkey, Western and Eastern Europe, Russia, the CIS, the Middle East, Central Asia and Africa.

But it was also a success in the sense that once underway it felt like a natural fit into TW’s growing portfolio of global conferences.

In the last eight years tissue capacity in Turkey has more than doubled and the country is now the sixth largest towel and tissue producer in the European region.

In this issue we summaries some of the key reasons why that growth will continue.