France is one of the top ten paper making countries in the world but, like elsewhere, the shrinking global market for printing and writing (P&W) in the last decade is putting this distinction at risk. Today, the French paper market is dominated by packaging. Printing and writing is second at a little less than half of packaging and about twice that of other major grades like Towel and Tissue (T&T) (Figure 1). Over the last ten years, the total paper market has diminished by nearly two million tonnes. In 2005, packaging was 39% of the market and P&W was 27%, where today they are 40% and 19% respectively. During that same period, T&T has grown by approximately 100,000 tonnes (Figure 2). 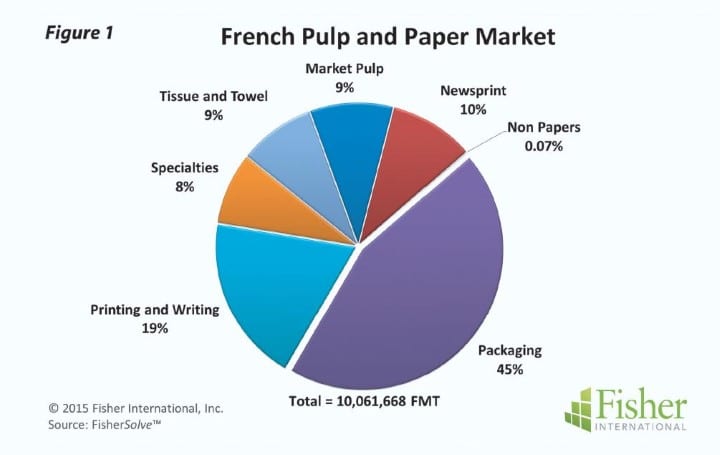 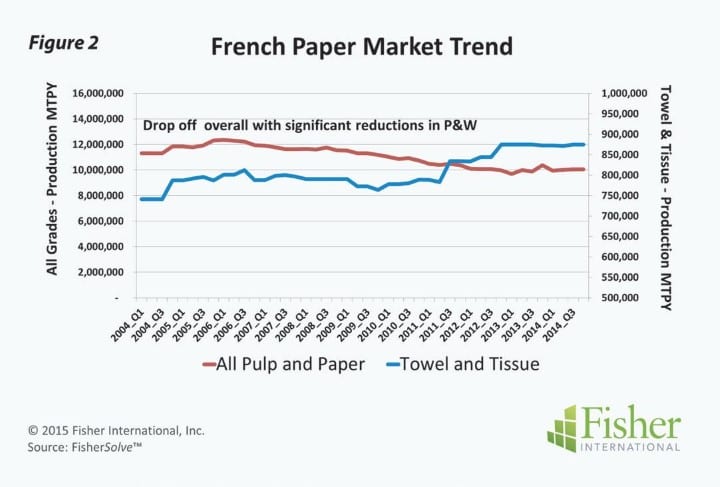 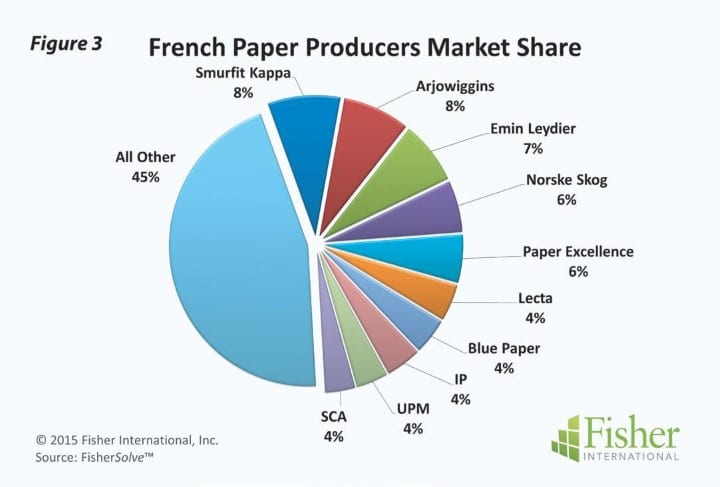 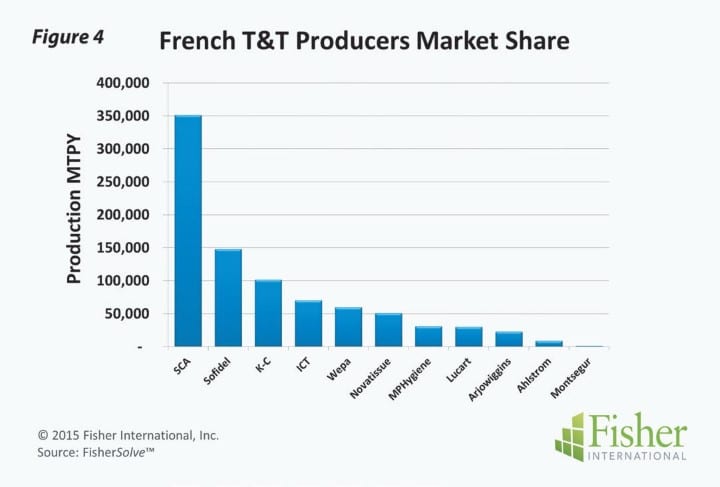 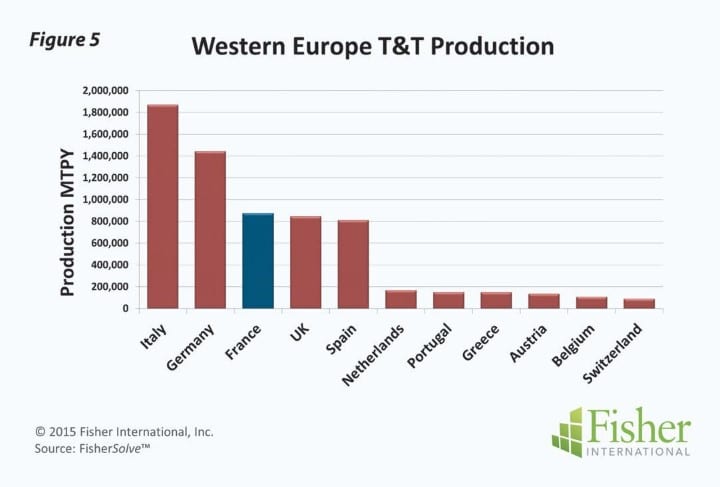 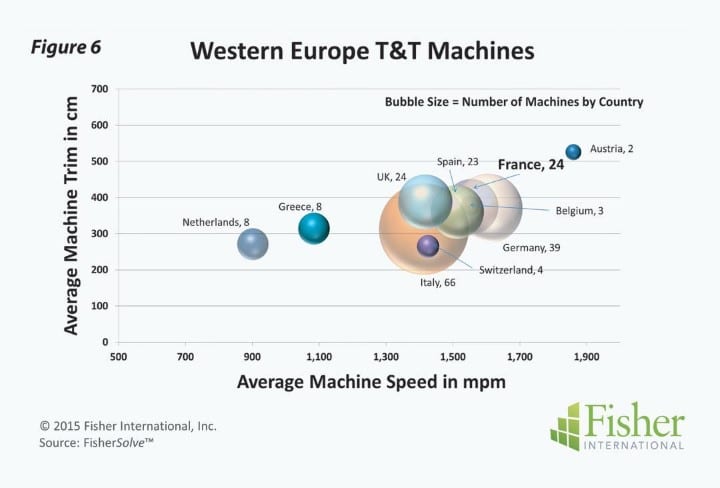 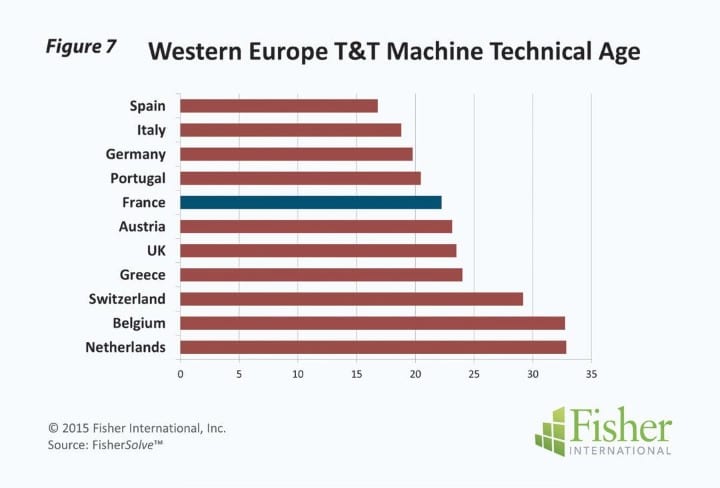 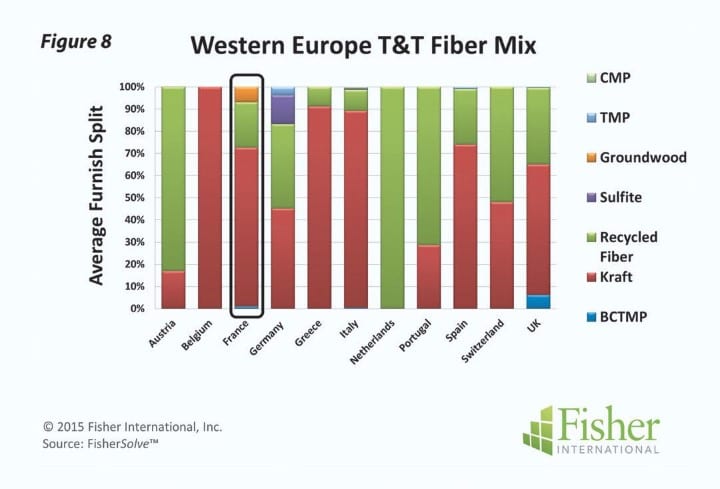 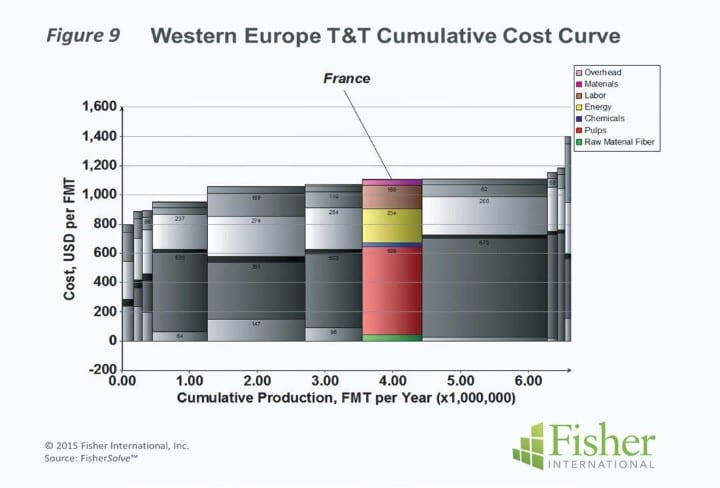 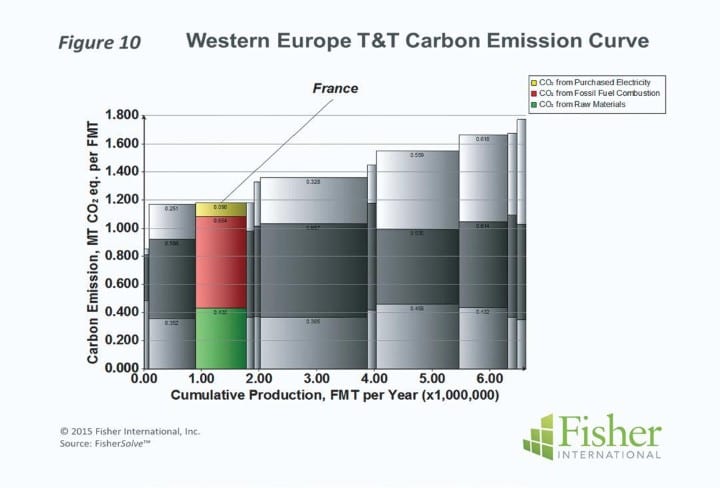 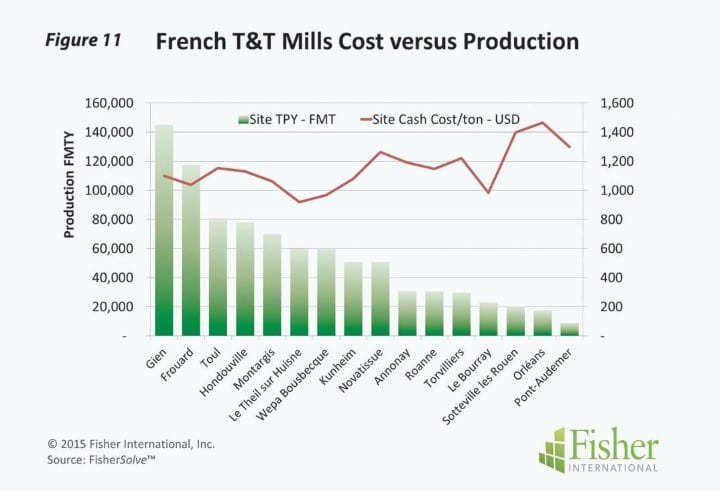 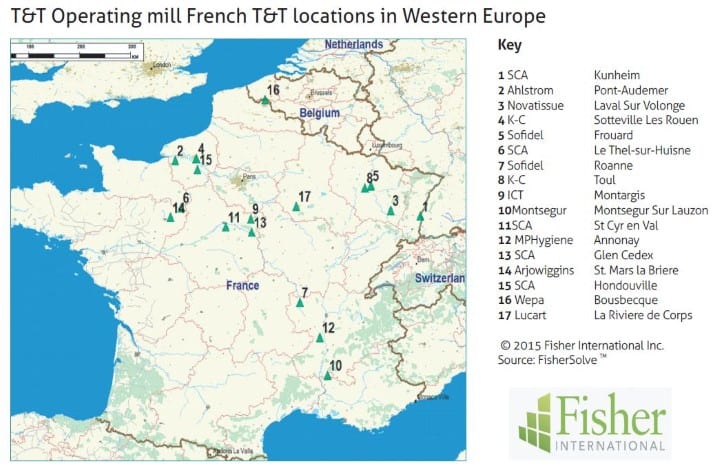 Complications of a shrinking market may be aggravated by producer size and regional share of market. There are over fifty paper producers in the French paper market. The top ten producers account for about half the tonnes which leaves the remaining market broadly divided among many players. Thus, the market is highly fragmented with no single producer holding more that 8% market share (Figure 3). T&T is far more consolidated with SCA holding a 40% market share and out producing its closest competitor by more than double (Figure 4). France is the third largest T&T producing country in the region behind Italy and Germany at first and second respectively (Figure 5). This third position is shared with the United Kingdom (UK) and Spain each at essentially the same production.

A trim versus speed diagnostic of T&T machines in Western Europe shows that France is in the middle of the set (Figure 6) indicating neither a major advantage nor disadvantage in size and speed. A technical age assessment reveals a slight disadvantage in competitive position against the market leaders but in line with upkeep and investment overall (Figure 7).

Fibre is the major cost component in T&T. In Western European countries there is a mixed bag of fibre strategies. Kraft pulp is a substantial part of furnishes in the larger producing countries while recycled fibre is prevalent in the smaller countries. At just above 70%, France is heavy on the use of Kraft and light on the use of recycled fibre but this is not dramatically different from other major producing countries (Figure 8).

Country to country competitiveness is often driven by manufacturing cost position. The cost curve for Western Europe is fairly flat across the bulk of production. There are a few outliers at the top and bottom of the cost curve but most large-capacity countries, including France, are grouped across the middle of the curve, suggesting a very competitive environment (Figure 9).

‘‘Country to country competitiveness is often driven by manufacturing cost position. The cost curve for Western Europe is fairly flat across the bulk of production.’’

Carbon emissions have the potential to impact cost positions and disrupt this balance in the future. In this regard, France appears to be well positioned when modeling Western European carbon emissions (Figure 10).

In the end, competitiveness in T&T tends to be local. Typically, the company or mill with the best cost position making the right product performance and having adequate capacity to meet the needs of its market area should have a strong market position.

Assuming all competitors make comparable quality products that meet end users’ needs, the low cost position should command the market. With some exceptions, this appears to be the case in France where the low cost mills are also the highest producing. The smaller mills (in terms of T&T production) have the highest cost per tonne (Figure 11).

The source for market data and analysis in this article is FisherSolve™. Data tables behind Figures 1 – 11 can be obtained from Fisher International. E-mail requests to [email protected] 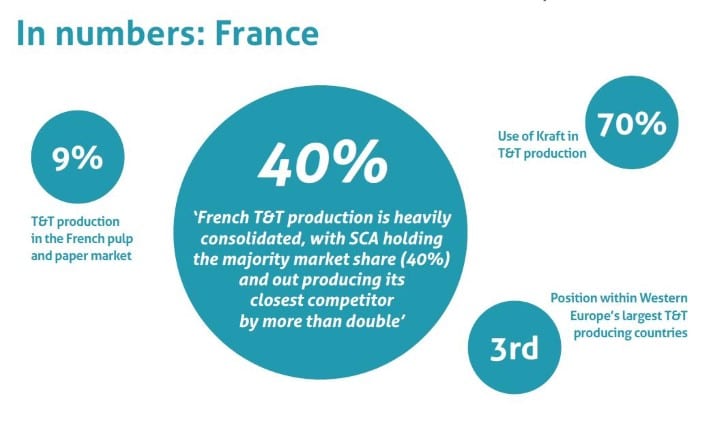 Fisher International has supported the pulp and paper industry for over 25 years with business intelligence and management consulting. Fisher International’s powerful proprietary databases, analysis tools, and expert consultants are indispensable resources to the industry’s producers, suppliers, investors, and buyers worldwide. FisherSolve™ is the pulp and paper industry’s premier database and analysis tool. Complete and accurate, FisherSolve is unique in describing the assets and operations of every mill in the world (making 50 TPD or more), modeling the mass-energy balance of each, analyzing their production costs, predicting their economic viability, and providing a wealth of information necessary for strategic planning and implementation. FisherSolve is a product of Fisher International, Inc. For more information visit: www.fisheri.com or email [email protected] USA: +1-203-854-5390.