The South American tissue industry gathered in São Paulo to attend the only key meeting point for the region’s growing and dynamic tissue market. TWM reports on some of the key talks from the event’s leading conference sessions.

The South American tissue industry has gathered in São Paulo to attend the only key meeting point for the region’s growing and dynamic tissue market. It was the second edition of Tissue World in São Paulo, after the successful launch edition held in 2015.

The show was launched to respond to the growing demand for tissue products in South America, a fast-growing market that did not previously have an event dedicated to the tissue industry.

It took place between 31 May – 2 June at the Transamerica Expo Center in one of Brazil’s most vibrant financial cities. The trade show offers wide-reaching networking opportunities and a new viewpoint on the region’s fast changing tissue market.

Whether on the show floor with the many exhibitors or in the conference with the impressive line-up of expert speakers, participants had the opportunity to network with key industry players and explore the latest technical developments to find out what’s changing in the industry and how they can keep their company ahead of the curve.

Conference targets potential in Southern American tissue market
Speakers at the Senior Management Symposium kicked off the conference sessions which were themed: ‘Challenges and opportunities: Approaches to accelerate the success.’

The sessions discussed the latest opportunities and challenges in Brazil and the surrounding regions. They were designed to show approaches to accelerate success and discussed micro – and macroeconomic outlooks and perspectives, logistics, trade flows, pulp and sustainability, market opportunities, tax expertise and finished product trends.

The functional and hands-on Technical Sessions followed on 1-2 June and covered the latest and most relevant information and case studies, presented by tissue industry experts.

Pedro Vilas Boas, director, Anguti Estatística, Brazil
Tissue made up 12% of Brazil’s total paper production in 2016 – an increase of 111% from tissue production in 2000. Packaging/wrapping made up 52%, printing/writing 25%, cardboard 7% and others for the remaining 5%.

INTERNATIONAL ENVIRONMENT
Pro-Euro French vote outcome: Emmanuel Macron’s victory in the French Presidential election (despite recordsetting abstention numbers) reduces concerns over the block coming apart. Notwithstanding, Macron will have a huge challenge before him in the sense of securing a congressional majority to put his proposals into practice, as his party was founded just one year ago.

Activity in Europe picking up: leading activity indicators point to the most favourable prospects in six years.

Rising uncertainty in the US: Activityis losing momentum and political uncertainty is on the rise in the second quarter. President Donald Trump has lost popularity and governability after defeats in Congress.

DOMESTIC ENVIRONMENT
Labour Reform with a favourable vote: with 296 votes for (and 177 against), the scoreboard in the Lower House was better than expected and close to the 308 votes needed to pass the Social Security reform.

However, recent corruption accusations involving President Temer had a strong impact and the reforms are now in standby; the Temer government struggles to survive.

Presently the most probable outcome of the political crisis is Temer’s deposition by mid-June because of accusations of fraudulent campaign financing; Congress should then elect a new president, probably someone that until now supported the present government.

Fiscal stimulus could boost US economy in the short-run … but could also spark inflation – specially if accompanied by protectionism (higher import prices), in a context where the economy is approaching full employment (higher wage growth).

Global outlook: growth to return to a lackluster pace in the medium term.

The Federal Open Market Committee is expected to (moderately) speed-up the pace of monetary normalisation in the 2nd half of 2017 – an event that can weigh on global markets.

US and global economies expected to return to a lackluster growth in the medium term, as monetary stimulus is gradually reversed in most advanced economies.

Various shocks were responsible for the deterioration of the Latin American macroeconomic environment: external shocks, such as the USD appreciation and the “Trump-effect” (with a strong impact on Mexico); internal political crises (mainly in Brazil, Venezuela and Argentina); and a sharp commodity devaluation (with particular impact on Colombia, Peru and Chile).

Economic performance in Latin America is expected to remain somewhat subdued, once the outlook for commodity prices is lackluster (due to a slower Chinese demand for industrial inputs; to interestrate hikes in the US and Europe; and to initiatives aimed at shrinking global liquidity.

Although India is replacing China as the fastest growing Asian economy, the net effect of these economic trends on commodity prices is expected to be modest in the near to medium term.

Besides the lackluster outlook for commodities, fiscal restraint is expected to weigh on Latin American growth in the near to medium term, as many countries are embarking on a period of fiscal consolidation.

On the other hand, inflation is slowing (helping to improve real income) and monetary conditions are being relaxed (which helps to reactivate the credit spigot) in most Latin American countries (especially in Brazil and Colombia) – a positive for domestic consumption.

All in all, outlook for Latin America points to improving performance in coming years, but growth should remain somewhat subdued, far from the pace of expansion that had been observed until the beginning of this decade.

Favourable external conditions have recently improved the economy´s terms of trade, mostly due to commodities’ appreciation.

Although President Temer is unpopular, executive branch dominance has been restored in Congress. But renewed political turbulence put structural reforms (social Security, Labour regulations) in standby; Congress should now take more time to approve the reforms and/or will approve less ambitious versions of them.

Both inflation and inflation expectations have receded towards target, leaving ample room for monetary easing: policy  rate expected to reach a neutral bias (estimated to correspond to a 9% to 10% policy rate) before year-end.

Lower inflation and monetary easing help to explain why confidence is recovering in almost every sector of the economy, despite a still depressed economy, in which resource idleness continues very high – a negative for investments (and, thus, employment).

Brazil: consumption to lead the somewhat sluggish) recovery.
Besides, lower interest rates should help to clean up consumer’s balance sheets (once interest payments have become a burden for households in recent years).

Under improving fundamentals, consumption is expected to lead the recovery, that should remain somewhat sluggish in 2017 and pick-up from 2018 onwards.

Resumed growth will come, at first, from household consumption (as a result of decelerating inflation, lower interest rates, increased confidence and the release of R$ 43 billion in FGTS funds) and exports (more competitive exchange rate and modest word recovery l), as well as farming (better weather conditions) and mineral extraction (having overcome the negative effects of Samarco and taking into account a new Vale mine).

High idleness should keep investments low; the big unknown is on the infrastructure front.

What could change the outlook to negative –
• If consolidated global operating income declined over the next 12-18 months
• Increased input costs that cannot be passed on to customers, or reduced prices as a result of operating capacity in excess of demand for several grades.

What could change outlook to positive –
• If consolidated global operating income increased by more than 4% over the next 12-18 months.
• Higher prices across several major grades (such as paper packaging) and regions due to tight demand-supply balance or higher than expected GDP growth.

The industry’s global operating income  will increase 2%-4% over the next 12 months with operating income growth from paper and forest products producers in North America and Latin America, and from 1% to 3% in Europe.

Prices across most grades will increase during the first half of 2017, followed by weakening of prices in the second half as capacity increases outpace demand growth.

AfH market dynamics –
Business-to-business (B2B) transactions are characterised by tighter budgets and less relevance in product differentiation, which encourages establishments to choose cheaper products instead of picking the leading ones.

The main differentiation that manufacturers of AfH tissue and hygiene can provide is their service. Maintenance and delivery time are very significant in B2B negotiations, and therefore the most efficient players have competitive advantages.

Growth rates could have been much stronger if industrial and services demand were stronger.

The National Health Surveillance Agency (ANVISA) determined the increase of usage of disposable wipers – hospitals, industrial kitchens and food service outlets are now obliged to use wipers for cleaning purposes.

The water crisis faced during a couple years ago also helped pushing sales up. Brazil still offers plenty of room to grow.

… And expanding new products and features.

Brazilian consumer –
Had to stop and think of WHAT and HOW they bought and consumed; Adapted to the new reality. Tried new channels, new brands, new products and new usages… Acquired a more reasoned and critical attitude. Brazilian crisis has negatively impacted consumer confidence. Over the last five years, economic concerns have increased. Percentage of online activities related to the purchasing process: 78% – browse the best price. 66% – find  the desired product and services. 66% – buy a product or service. 64% – search for information on products/services. 54% – see options. 30% – use social networks to exchange information. Online price comparisons empower the consumer.

Purchase behaviours have changed. From 1/3 in 2015 to nearly half in 2017 of people have stopped buying some categories, such as beer, soda and bleach and soy bean oil. What are the behaviour changes in times of crisis?

In short –
1. Are our companies adapting to the new business dynamics of the post – CRISIS?
2. In what extent does the consumer consider your product relevant, or may replace your product with another, or even change the category?
3. What are the trends of our products and the most relevant channels?

The Barometer Issue: One year on… you report back on your progress

New OnePly product that “easily competes with TAD and NTT” 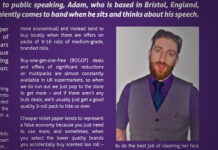