The stats are stacking up and they make impressive reading for the global tissue industry.

The Miami trade show attracted 1,931 participants, a 40% increase compared to the 2012 edition.

A total of 173 companies exhibited and no less than 51 businesses have been converted to the TW banner exhibiting for the first time.

The footfall breakdown was 711 visitors, 709 exhibitor staff and 457 conference delegates, making Miami the most successful show ever.

The statistics reflect a significant pick-up in the American tissue market, which despite being in a mature phase continues along a dynamic expansion path.

The market has also seen a rapid growth in independent tissue converters which have gained substantial market share in the AfH sector in particular.

The ongoing battle between brands and private labels has also proved a catalyst for innovation and investment.

“The proliferation of experts across so many fields that touch the tissue industry was evident.

William A Nelson, president, Elettric 80, told TW: “The show was wellattended and we renewed contacts with many valuable customers and prospective customers.

“We appreciate the efforts to expand the focus into areas related to products and supply chain.”

The Tissue World Americas summit had a record-breaking crowd of over 457 registered attendees sit in the conference in Miami; the highest in TW’s 21 year history.

Talks covered the latest key trends in the global tissue industry, from evolving consumer and retail trends; private label versus brands; sustainability; Greenpeace and WWF viewpoints on the tissue industry; energy savings; how large retailers are meeting sustainability challenges, through to the latest developments in NTT, ATMOS, ADT and TAD technology.

Visitors included 40 retail and commercial tissue buyers, many of which were attending the event for the first time because of TRIF.
TRIF was designed to give tissue buyers a better understanding of the capabilities tissue makers have to meet their requirements, both environmental and quality wise, as well as provide a deeper appreciation for the immense technical development efforts that go into tissue making.

See TW magazine’s summary of talks in the Retail Special on page 42.

The next edition of Tissue World Americas will be held in New Orleans from March 14-17 at the New Orleans Ernest N. Morial Convention Center (Hall G).

New Orleans was chosen for numerous reasons, including a state-of-the-art venue, a charming downtown next to the location of the show and reasonably priced hotels. 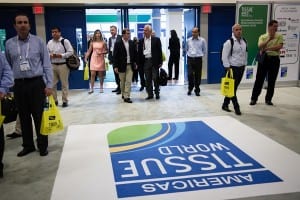 69 Countries from which the participants attended

There were a total of 34 nominations submitted by exhibitors, visitors and delegates and the winner was announced at the show.

They aim to raise awareness of the tissue industry and share the pride of being part of the world of tissue and inspire tissue professionals by showcasing outstanding photography. 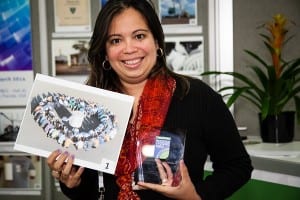 A half billion Euro investment with tissue at its core

‘I hate to walk around looking like John Wayne’

Luxury products have been the most dynamic at 6% value growth...