Spain’s tissue business has been shaped by the economic challenges the country has faced since 2007. The great worldwide recession that started 12 years ago disproportionally affected Spain’s economy. By 2018, the country had recovered lost GDP but only partially returned to unemployment levels seen before the downturn. Figure 1 shows the changes in real GDP as a percent in orange bars compared to the sum of household final consumption expenditures in blue. This is important to note because it indicates consumer spending available for tissue. Total household expenditures in 2018 have just about recovered to the 2007 level. 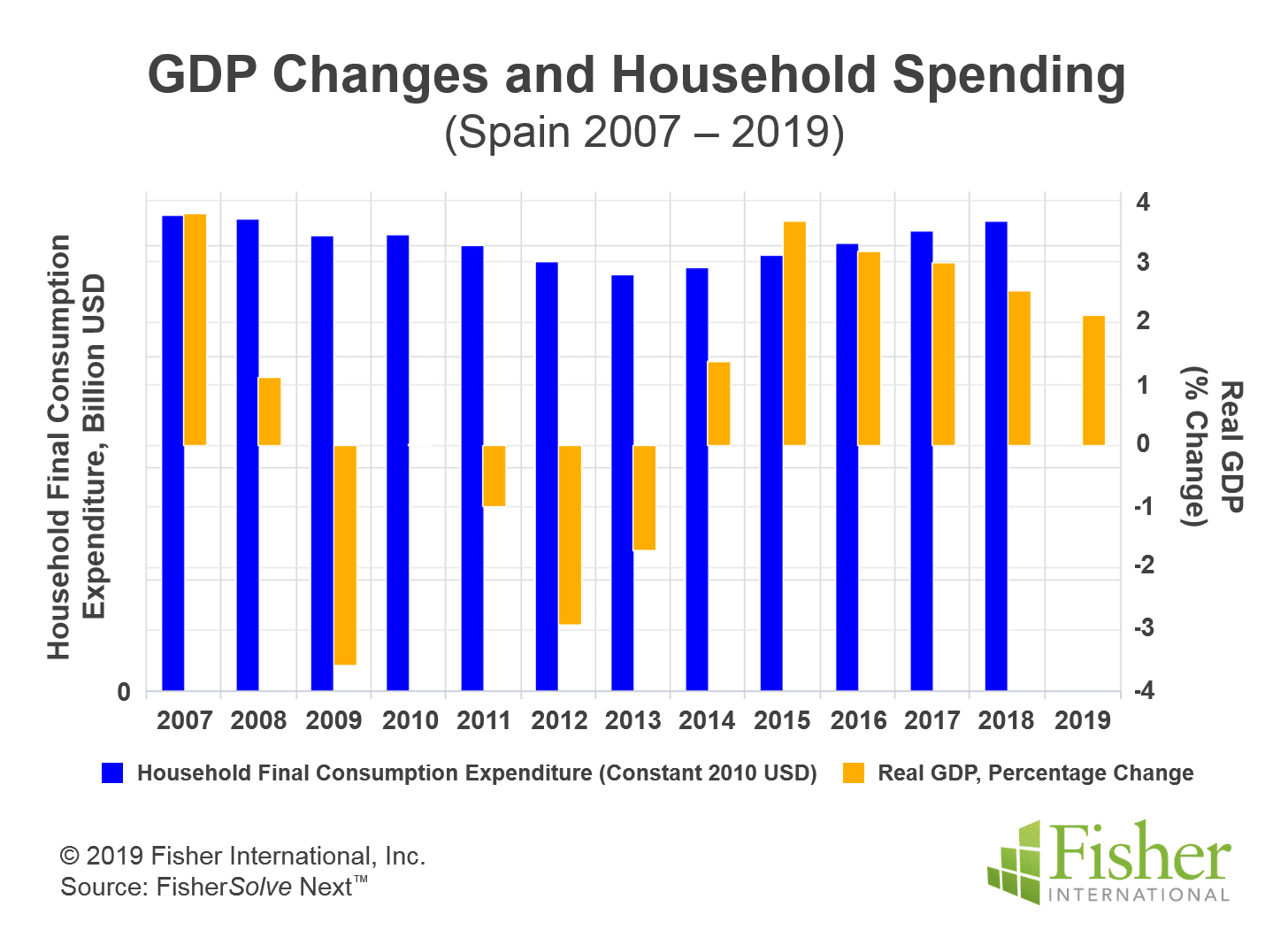 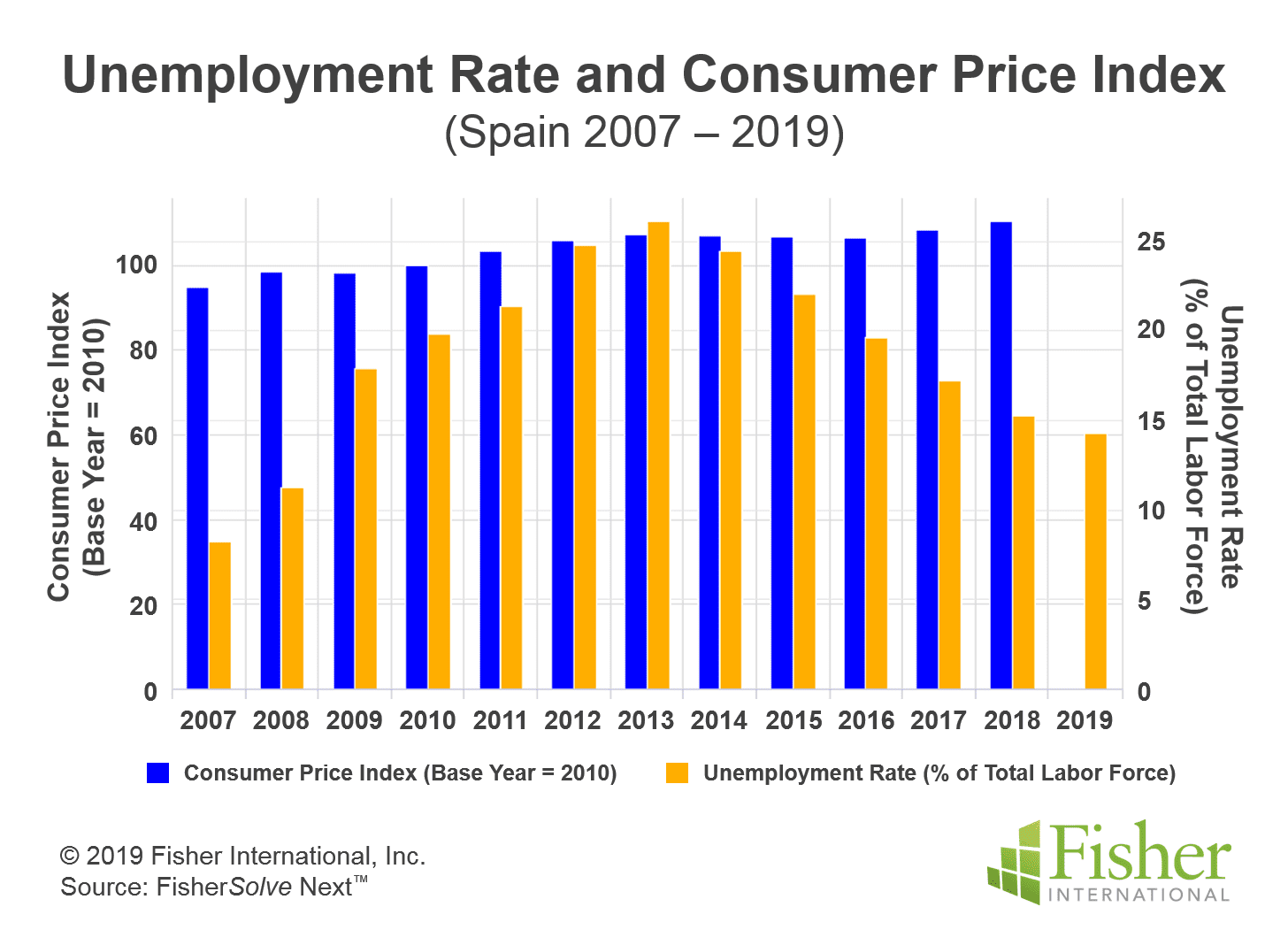 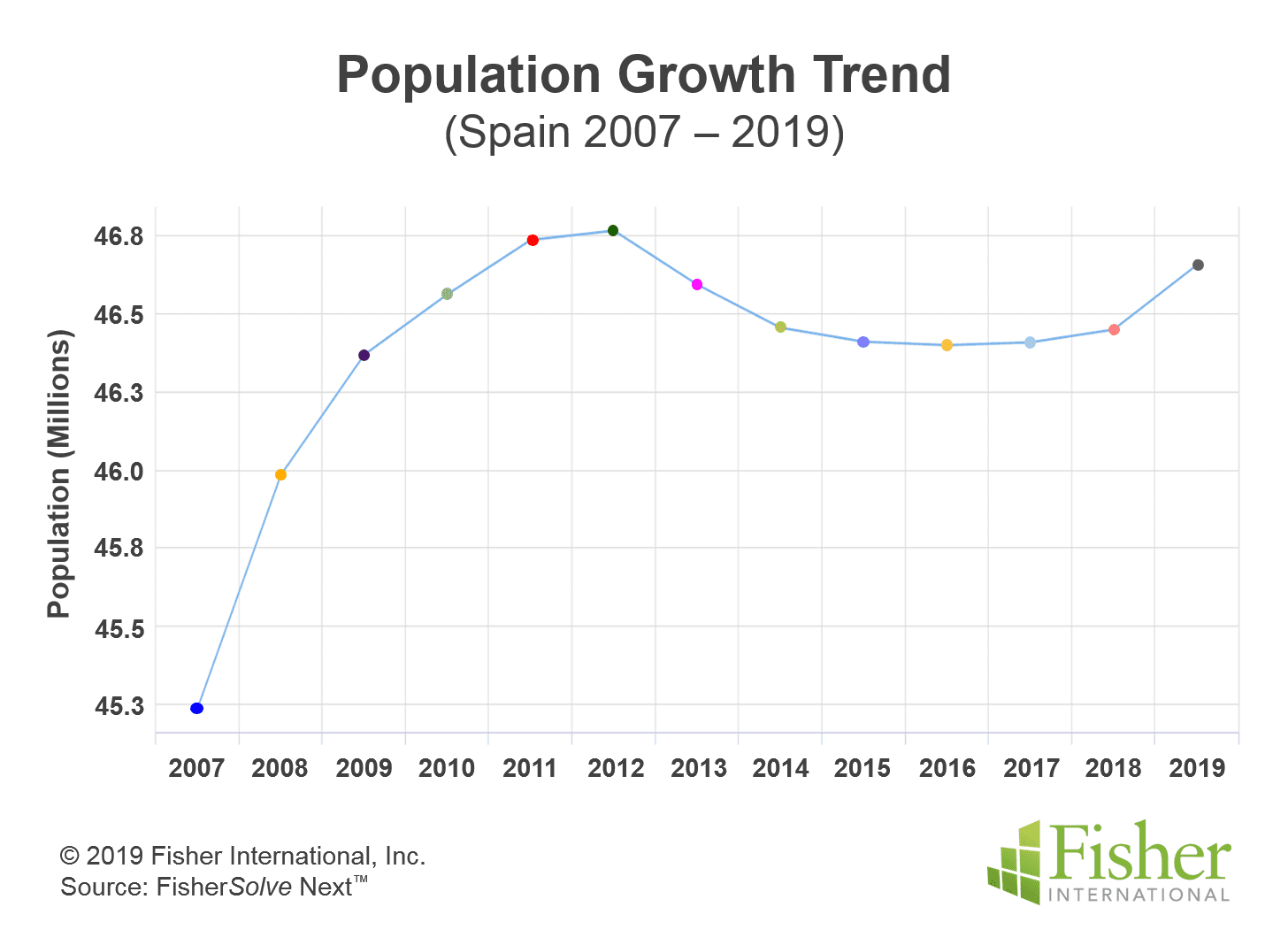 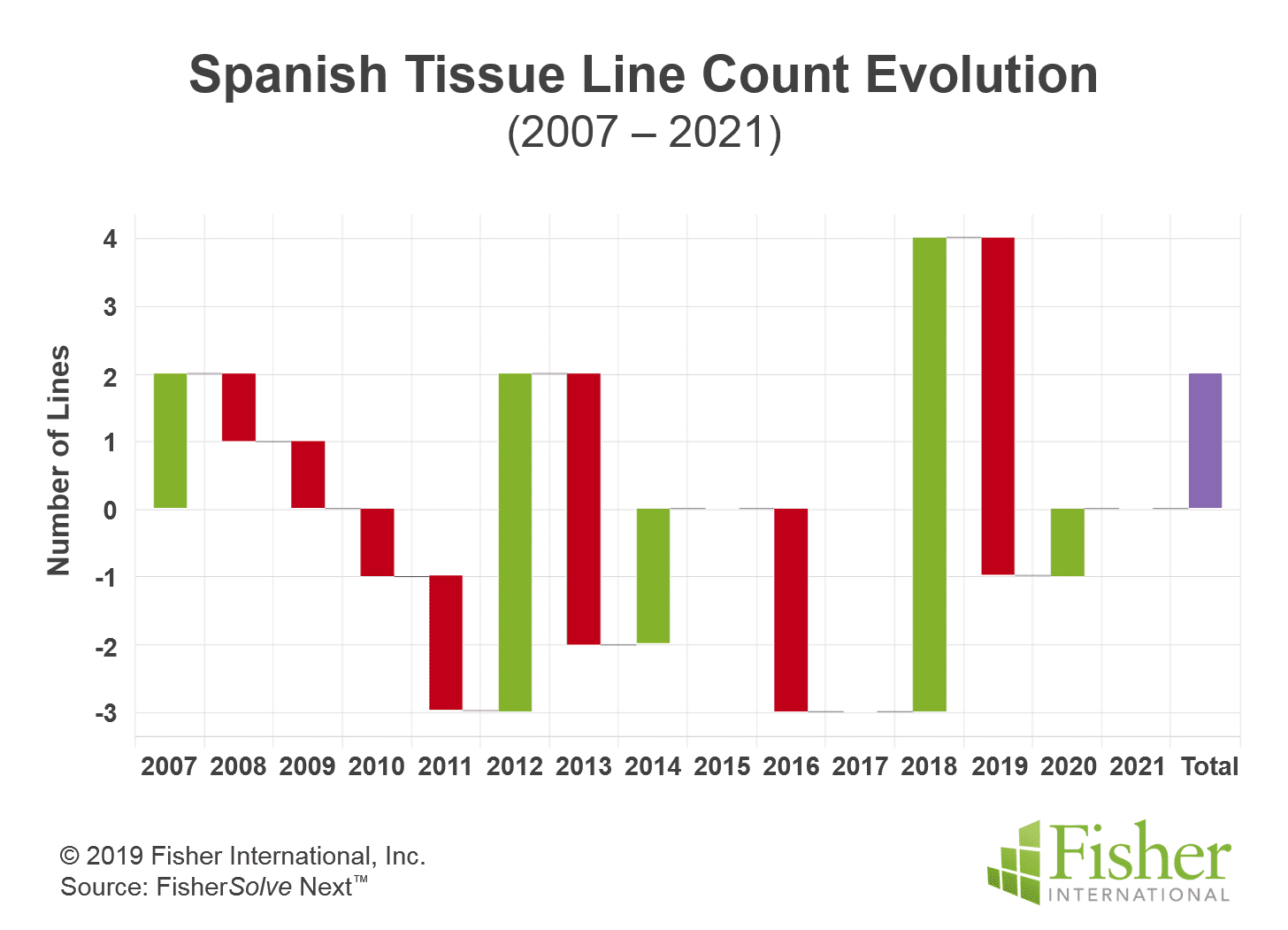 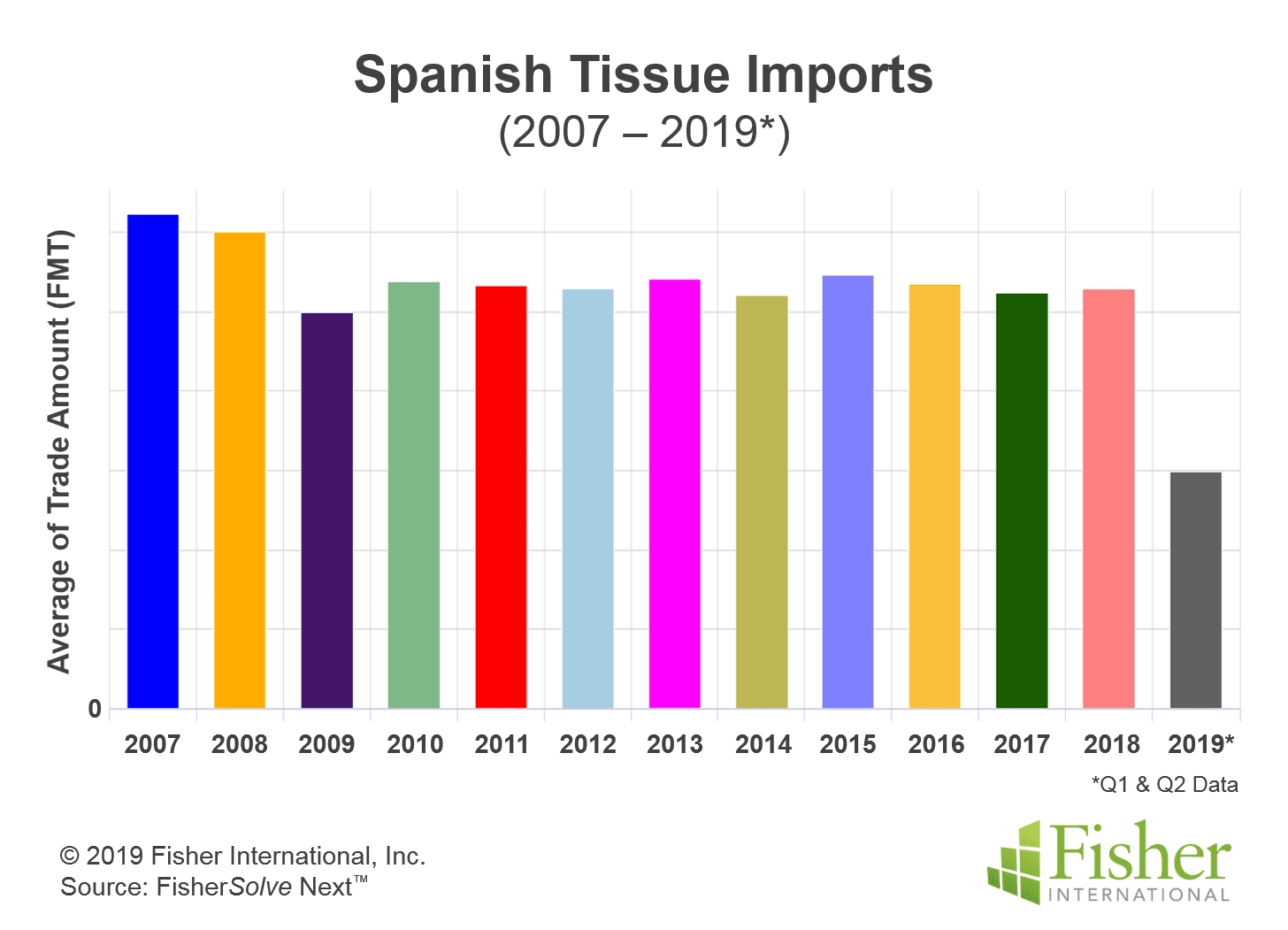 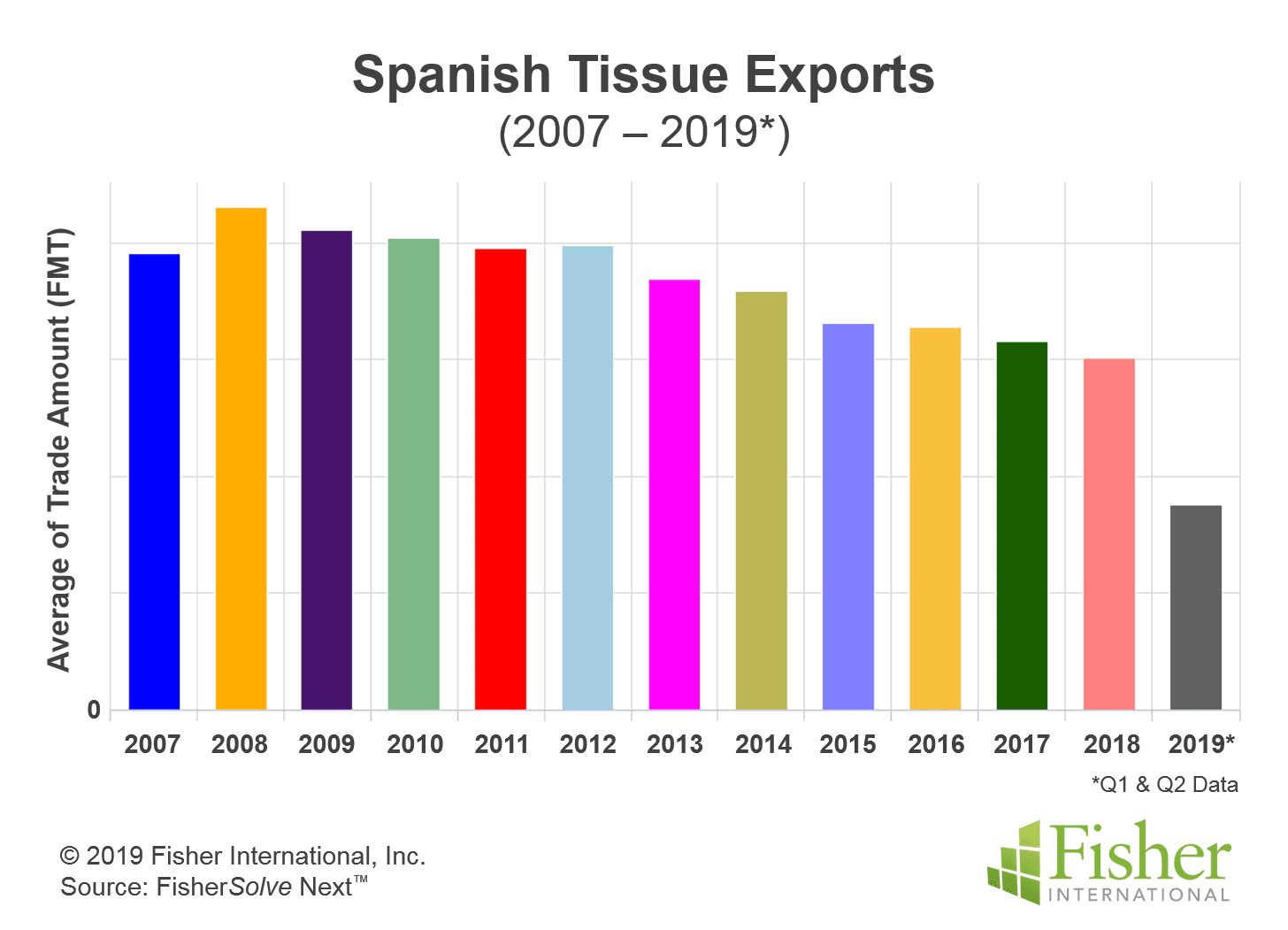 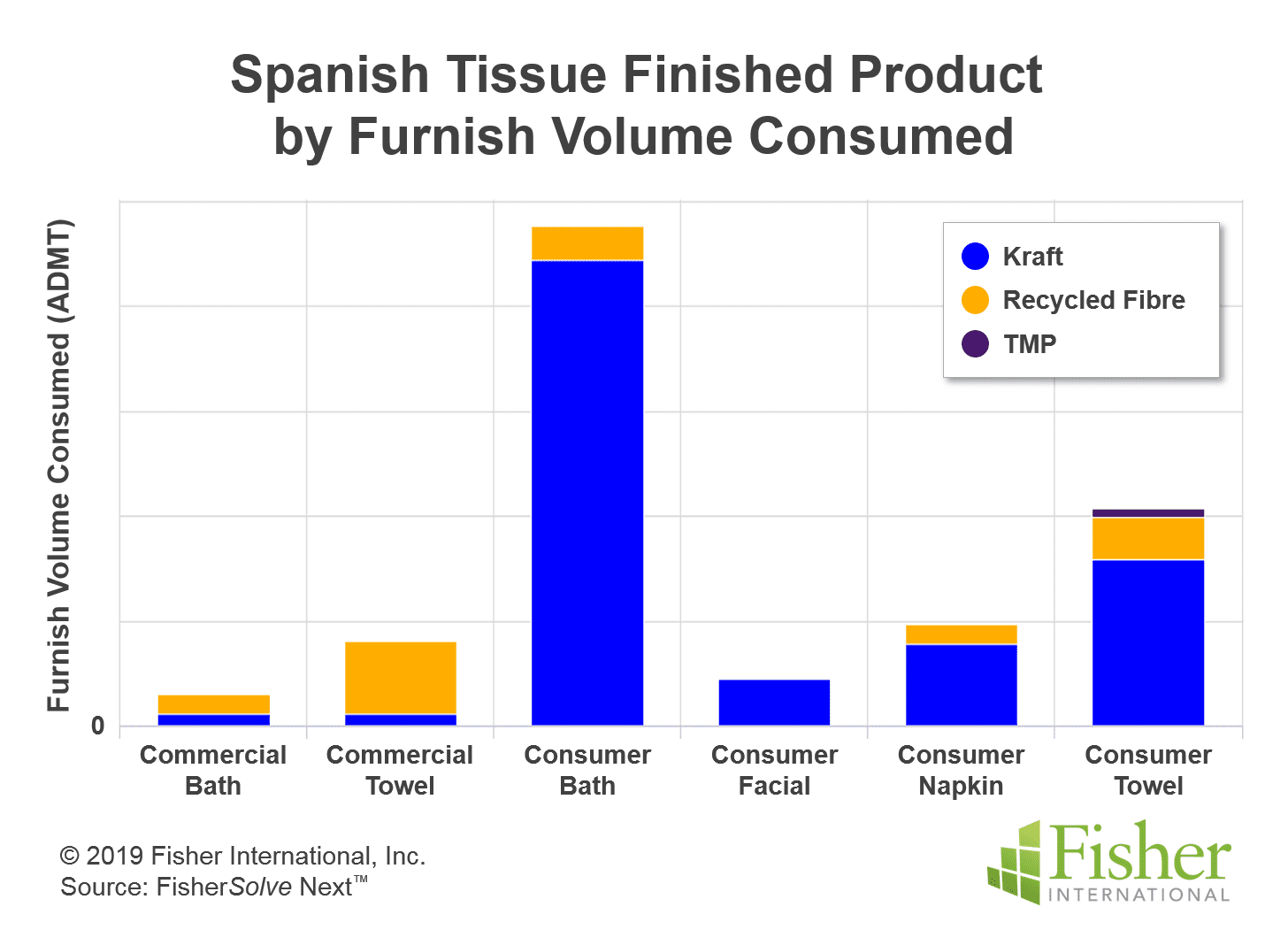 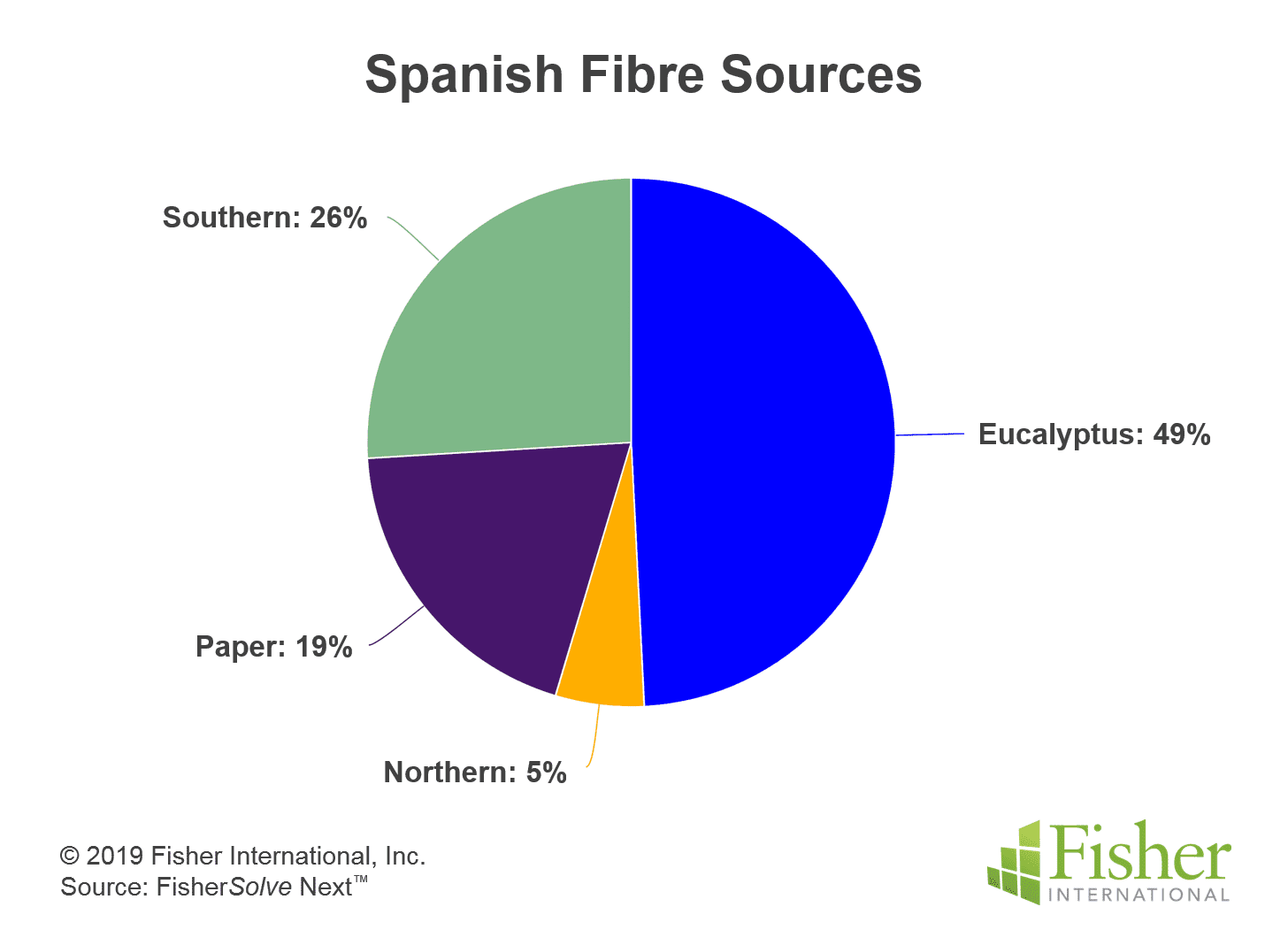 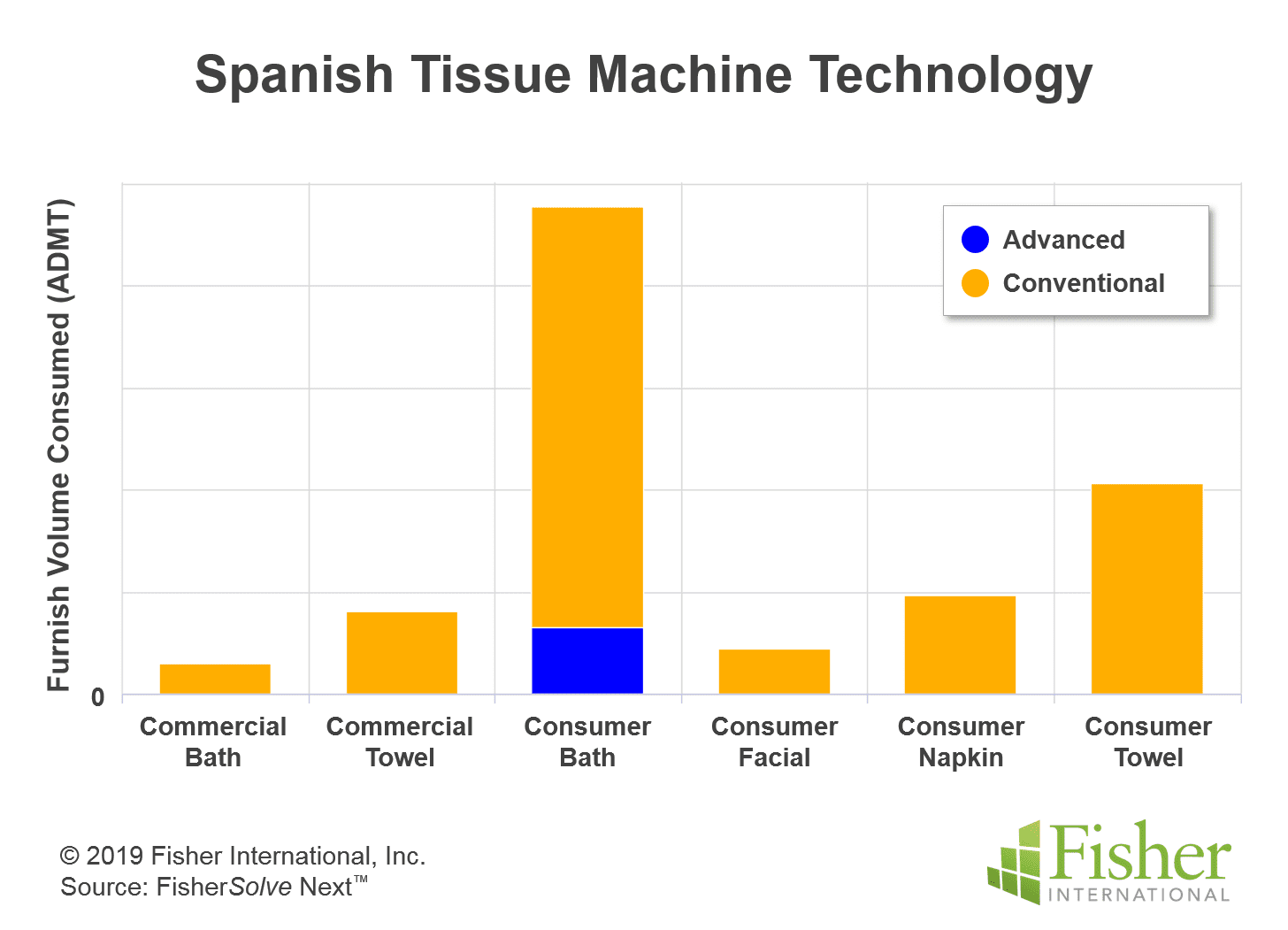 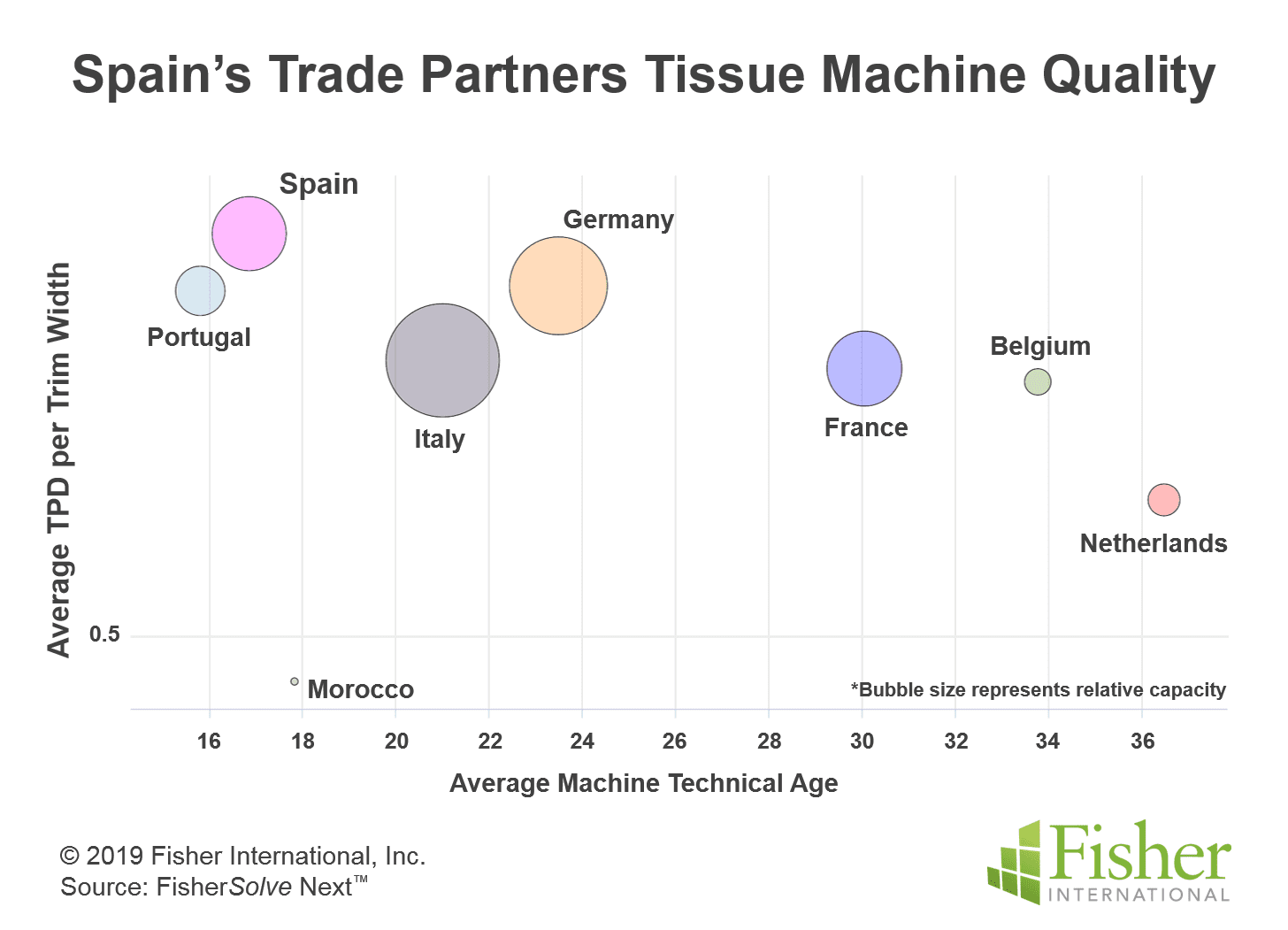 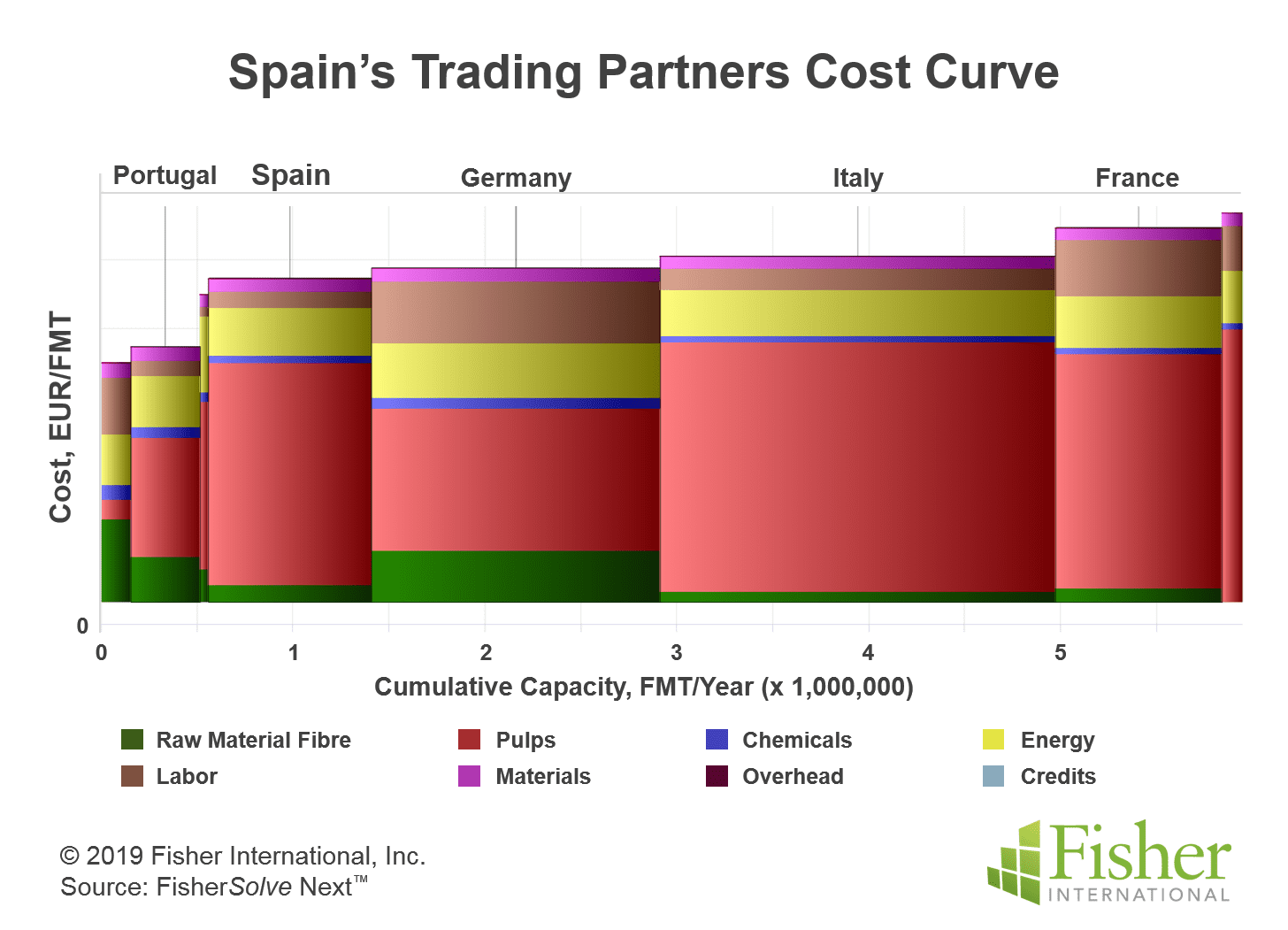 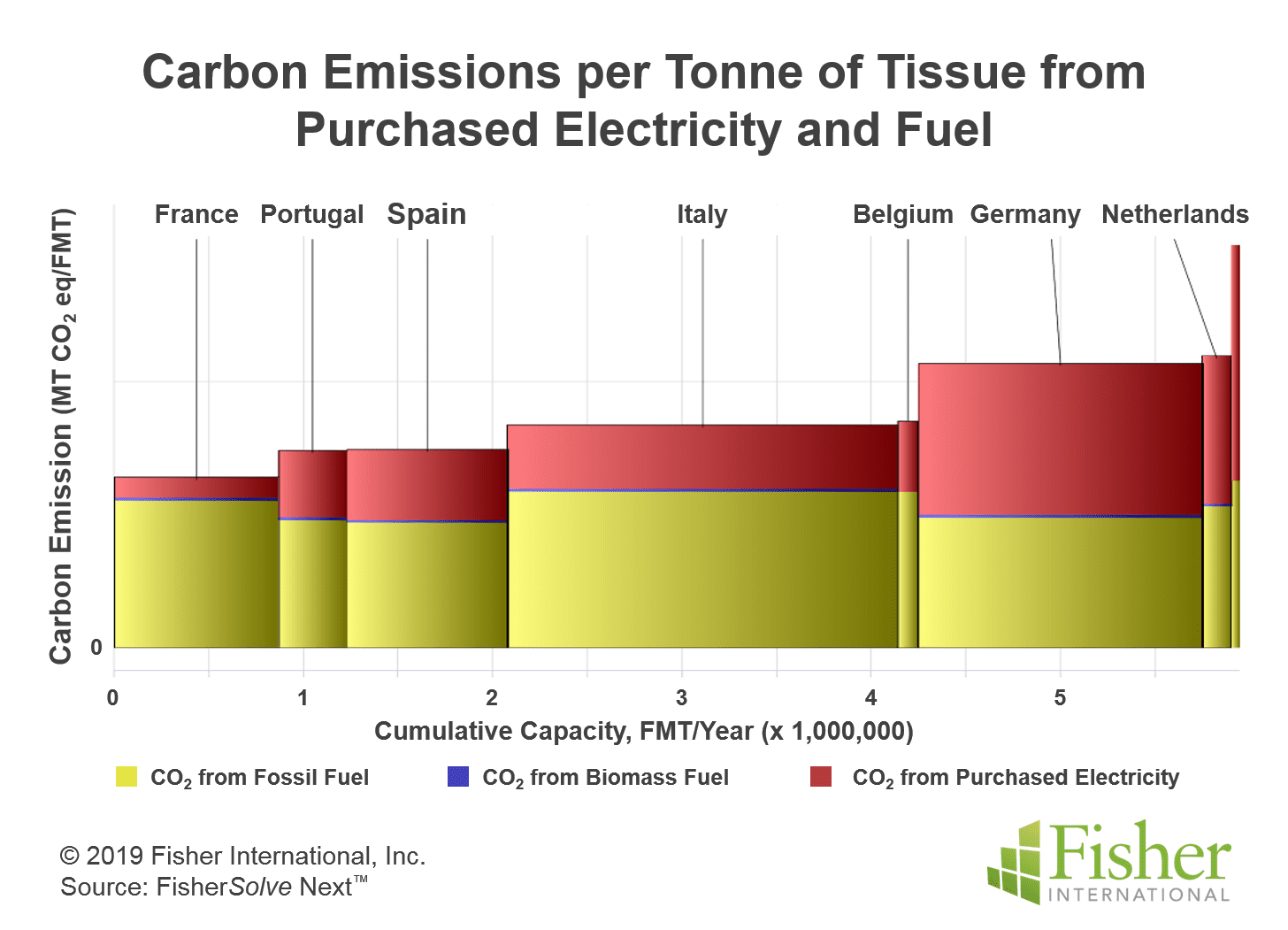 Figure 2 pairs the unemployment rate and the consumer price index over the same economic downturn and recovery. The unemployment rate shown as orange bars has not entirely recovered to 2007 levels. Unfortunately, the consumer price index has continued to advance during this period. This economic difficulty also reduced the per capita tissue consumption per person, which dropped from about 17.5 kg per person in 2007 to approximately 15.5 kg per person in 2010. Spanish tissue consumption has recovered recently to the pre-downturn demand levels.

After the downturn started, Spain also experienced changes in population, with numbers flattening to slightly decreasing, as shown in Figure 3. This reflects the very low Spanish birthrate and emigration to other European Union countries as people look for work.

Figure 3 doesn’t tell the whole story, however. The United Nations population division forecasts that Spain’s will decrease by 9.4m or about 24% by 2050. This follows the trend of low fertility and aging populations seen in most developed countries, but Spain is expected to see the most significant impact. Whether this extreme decrease will come to pass cannot be proven at this point. Anyone who has forecasted future school enrollment or even baby diaper demand for children not yet born understands this frustration. Immigration is another politically sensitive subject in developed countries, but again this could change over the next 30 years. The key takeaway is that Spain is at high risk for a significant decline in consumers of tissue products.

Spain’s tissue production capacity was carefully managed during the economic downturn and recovery. The cumulative average growth rate for domestic tissue capacity was 0.57%. Adding the announced changes through 2021 results in a cumulative annual growth rate of 0.52%. Figure 4 shows the changes in the number of Spanish tissue lines over this period. This indicates that the country has taken out smaller machines and replaced them with several larger machines, all while keeping capacity flat in order to slow growth.

Spain’s tissue imports over the recent periods are shown in Figure 5. The short bar shown in the year 2019 represents data through the second quarter only. Tissue imports represent less than 10% of total tissue consumption. These appear to have decreased since 2008 and have been relatively level since. Spain’s tissue exports are about four times lower than imports. Figure 6 suggests that exports have continued to drop off with time.

A quick review of the country’s tissue trading partners around the world shows that Belgium, France, Germany, Italy,

Morocco, the Netherlands, and Portugal are the key tissue trading partners accounting for almost all of the trade volume. (Later in this article, these countries will be used as a comparison set to establish the vitality of Spain’s tissue manufacturing capacity.)

Figure 7 describes Spain’s tissue production by product format and furnish employed. The Spanish market is overwhelmingly focused on consumer or At-Home tissue products such as bath, towel, napkin, and facial. These consumer products are overwhelmingly made from imported kraft pulp. The commercial – or AfH – business has more toweling used for washroom hand dry and secondary bath. These products are primarily produced from recycled fibre.

Figure 8 shows a breakdown of the source of fibre for these products. Almost half of the pulp is eucalyptus, with a combination of southern and northern pulps. This suggests that Spain is targeting high softness consumer bath and facial products. Papers represent the recovered fibre from recycled papers that primarily go into commercial products. At 19%, this indicates that Spain is highly dependent on the imported virgin pulp for its tissue business.

Spain does have some advanced tissue technology machines for producing structured tissue products, and Figure 9 shows that this is deployed for consumer bath production only.

The relative quality of its tissue machines is shown in Figure 10. Spain and Portugal have the newest machines on average and the highest tonnes per day per unit of machine trim width. Spain’s tissue producers are in the right place.

Figure 11 shows that Spain’s tissue production costs are moderate compared to Italy, Germany, or France when expressed on a per tonne basis. Spain appears to have significantly lower labour costs. It also has lower carbon emissions per tonne as coal is not a major energy source. Only France with its nuclear power and resultant low electrical energy carbon emissions does better, as shown in shown in Figure 12.

The country’s domestic tissue production capacity is in solid shape. Capacity additions have been measured to replace older and higher cost tissue machines without oversupplying the market. Spain is dependent on pulp imports, but it has maintained a good cost position relative to its peers. Carbon emissions are also in line with peers.

This analysis shows that Spain’s tissue business is in balance with its economy, but its recovery from the severe economic downturn has been slower than most of its peers in Europe. Tissue consumption has recovered, but the forecasted population decrease is troubling. The most important questions for the future include:

• Can Spain continue to maintain consumer purchasing power and, therefore, tissue demand with an older and smaller population?

• Could exports from other countries with lower-cost integrated virgin tissue mills displace some of Spain’s tissue capacity? 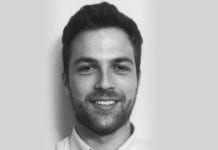