A slider with the ID of 41 was not found.

It is common knowledge that the economy of China has been growing at an accelerated pace for nearly a decade. The pulp and paper industry
has been part of the increased industrialisation fueling this economic picture. Towel and Tissue (T&T) is solidly a part of this overall growth. The regionalism that characterises this increased industrialisation may not be so widely known. The densely populated coastal provinces have been the concentration area for industry and these regions are clearly outpacing the interior and western parts of the country when it comes to investment and development in the recent past. Figure 1, a trend plot depicting the percentage of China’s T&T growth that is occurring in the coastal area versus the remainder of the country, illustrates this point.  Historically the bias has been 65% by 35% coastal area versus remainder of the country. The coastal areas spiked above 80% during the latest period of accelerated growth. At nearly four million metric tonnes, the coastal area represents 70% of China’s T&T production.

Reports from the media suggest China is attempting to shift some of the growth into the interior and western areas. The T&T trend plot (Figure 1) supports these reports in that the split is pulling off the peak and indicates increasing percentage in the non-coastal areas. 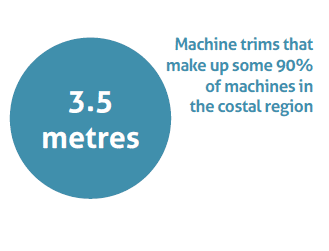 This article considers China’s Northern and Southern coastal areas. Coastal China’s T&T mills are geographically dispersed throughout the region’s provinces with the heaviest concentration being in the Southern portion (Map 1). The two coastal areas combined represent a concentration of T&T production unmatched by any other Asia Pacific region (Figure 2). In terms of sheer numbers, more than half of the 645 machines in the Asia Pacific reside in this part of China (Figure 3).

T&T machines in the Asia Pacific region vary from narrow one metre machines to six metres. Machines in Coastal China are similar in terms of the trim range for the region, with the average being slightly less than three metres (Figure 4). Mill production in Coastal China is, on average, on the high side compared to other producing countries in Asia Pacific with capacities in excess of 60,000 MTPY while the technical age of Coastal China’s machines is significantly below average (Figure 5).

in fibre cost (Figure 6). Fibre mix in Coastal China mills is 90+% market Kraft pulp with very little recycled being used (Figure 7). While recycled fibre is present in many countries, there is a regional preference for virgin fibre. There are some countries with significant use of secondary fibre, but these mills are serving much smaller, regionally focused markets.

Machine speeds are modest with more than half under 1,000mpm and only 15% above the 1,500mpm mark (Figure 10). Capacity-wise on the international scale, Coastal China’s machines concentrate below the worldwide average technical age but also production rate. However, there are a goodly number of new machines in the new high capacity category (Figure 11). T&T mill ownership has some international players, but the ownership is predominantly local with 85% of the mills being headquartered within China (Figure 12).

Fisher International has recently added a carbon database and benchmarking tool in FisherSolve™ which models the pulp and paper Industry. Carbon modeling results for mills in the Coastal Areas of China indicate a weighted average cradle-to-gate emissions of 1.684 and 1.784 MT CO2-eq/FMT for Southern Coastal and Northern Coastal China respectively. Comparatively, the worldwide weighted average for T&T is 1.613 MT CO2-eq/FMT (Figure 13).

Fisher International has supported the pulp and paper industry for over 25 years with business intelligence and management consulting. Fisher International’s powerful proprietary databases, analysis tools, and expert consultants are indispensable resources to the industry’s producers, suppliers, investors, and buyers worldwide. FisherSolve™ is the pulp and paper industry’s premier database and analysis tool. Complete and accurate, FisherSolve is unique in describing the assets and operations of every mill in the world (making 50 TPD or more), modeling the mass-energy balance of each, analyzing their production costs, predicting their economic viability, and providing a wealth of information necessary for strategic planning and implementation. FisherSolve is a product of Fisher International, Inc. For more information visit: www.fisheri.com or email [email protected] USA: +1-203-854-5390 [/box] 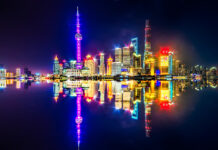