Södra Cell Värö has transformed itself into a tissue-focussed mill with pioneering environmental credentials. A TW report

With hindsight, would you have re- orientated a softwood pulp mill towards the tissue market some 10 years ago had you known that tissue producers in the near future would be scaling down their use of softwood fibre in favour of hardwood?

It is a question you could reasonably ask of Södra regarding its Värö mill. With the prospect of a declining printings and writings market, Södra entered the new millennium with a revised plan for its mill on Sweden’s west coast. It would continue to produce predominantly the spruce thinnings-based Black Z pulp among other equally appropriate tissue pulps, but take the necessary production and market steps to increase the proportion of its output sold to tissue mills from 10-15% to around 70% – in tonnage terms a ten-fold rise from some 30,000 tpa to 300,000 tpa. Like most major business decisions, success or failure owes something to luck and something to judgement. 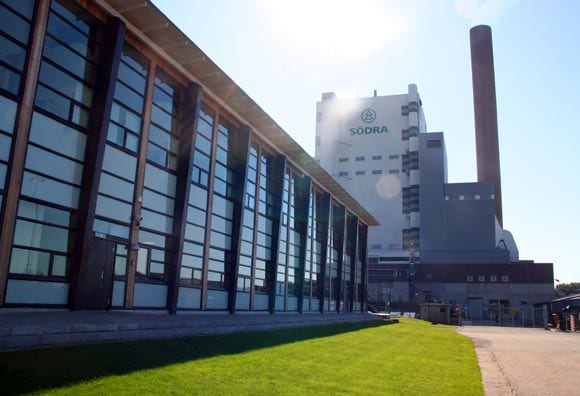 On the luck side, one of the staple fibres for Södra’s key tissue market in Europe, Canadian softwood kraft, was substantially withdrawn from the field from the mid-1990s with shipments switching to Asia. Europe’s tissue makers had built their brands on the high-quality levels and reinforcement characteristics which the Canadian pulp imparted, and substitution needed careful thought. Södra’s Black Z, with its combination of high softness and tensile, was just what they needed, and as demand grew, Södra was able to oblige. Södra has gradually tailored production at Värö to reflect the needs of tissue producers more closely. 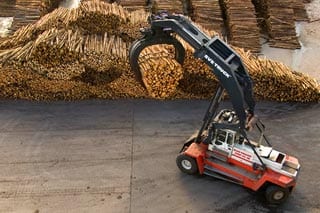 And it is to its production strategy that Södra can attribute its survival in the context of increasing substitution of softwood fibre with hardwood in the world of tissue making. Price differentials in market cycles of the recent past were enough to push tissue producers in the direction of hardwood. While the softwood premium has been largely ironed out, the die has been cast, and tissue production has been adapted to greater use of hardwood fibre. Tissue producers have not looked back, because they like the softness which hardwood fibre imparts. They are also encouraged by the prospect of increasing volumes of hardwood fibre from a series of pulp capacity investments in south America while softwood capacity remains virtually static.

This situation has worked in Södra’s favour, however. As the ratio of softwood fibre in a typical tissue furnish decreases, the quality of that softwood fibre becomes proportionally more important. The tensile from softwood fibre on which tissue makers rely cannot be achieved by “just any old softwood” when used in relatively small quantities, particularly if softness is also required, as of course it is with tissue. Södra Black Z is just the fibre which tissue makers need.

So when it comes to ascribing credit, how much goes to the tree and how much to the process? As Värö process
manager Knut Omholt says, “You cannot create gold from nothing; we are not alchemists,” in reference to the fact that without the characteristics of the spruce thinnings on which Södra Black Z is based, a pulp which is so suitable for tissue makers would have eluded even the best of pulp makers. “But while you can destroy good material,” he continues, “you cannot create a great product without a great process.” 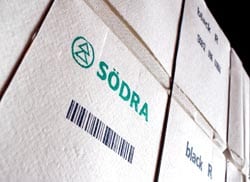 Pulp mills are unashamedly located according to the local wood and water resources. To transport logs beyond a certain distance is neither economically viable nor environmentally desirable. Värö’s position in south Sweden (Södra is the Swedish word for South), puts at its disposal forest resources which are very specific in nature. In the northern Nordic region, with a very short window of warm weather, fibre walls experience short, sharp periods of growth, which makes them thinner, yielding greater softness. By contrast in southern Europe, dominated by Radiata pine, the growing period is fairly constant throughout the year, which produces a thicker fibre wall that is not so great for softness.

In Värö’s vicinity, the growth characteristics are between the two extremes, so to achieve the softness it requires, Södra harvests the younger wood from forest thinnings, which have thinner fibre walls and so produce softer tissue. It is a win-win situation for Södra and the forest, because at a certain growth stage of a plantation, the forest needs to be thinned out to allow it to thrive, but the resultant thinnings are unsuitable for use in construction. So almost as a by-product of good forest management, Värö can procure the ideal raw material to which it can add value.

In the period of Värö’s evolution to a predominantly tissue pulp mill, its raw material base has remained largely unchanged but the mill now utilises the variations within the material to produce more differentiated pulps. The biggest forest-related change from the market’s viewpoint is that Värö can now supply FSC-certified pulp to all those who demand it.

The process evolves for tissue

This brings us to the process and its contribution to what Södra would argue is the ideal softwood pulp for tissue. The story begins, appropriately, in the woodyard. Omholt explains: “Through wood segregation we use the raw material in a more organised way. The raw material which is best suited to tissue production is selected more deliberately than before.”

Then following debarking, the chipping process has been upgraded to provide a much more even chip size into the digester. If a mill has to deal with a mixture of large and small chips, the degree of digestion is more random. “Consistency is important for all papermakers,” says Omholt, “but tissue customers have a greater need of it than most.” The digestion process, through chip-size management and other proprietary improvements, has been optimised over the past decade to capture the potential of the raw material, in particular tensile.

“If as a tissue maker, you start with an inconsistent pulp,” continues Omholt, “you have to make more adjustments to the process, such as the degree of refining, and this can affect runnability. It can also affect final product characteristics, although there is a certain amount of correction possible during the converting process, so on balance it is probably the efficiency of the tissue making process itself which is most sensitive to the consistency of pulp quality.

“Our target has been to minimise the post-pulping refining necessary for Black Z by maximising tensile within the process. The less refining that is necessary to boost tensile, the softer the tissue which can be produced with the pulp.”

Södra pioneered totally chlorine-free (TCF) bleaching in the 1990s, and Väro’s pulp output is 100% TCF. This could be viewed as a mixed blessing these days. While some customers still demand TCF, the fact that elemental chlorine- free (ECF) bleaching has become so well accepted for its environmental credentials means that TCF is less of an advantage in itself. Over the years, however, Värö has created a very gentle TCF bleaching process which has no detrimental effect on tensile. “We now see no difference between TCF and ECF in terms of tensile,” says Omholt,” so for those for whom TCF is not perceived as an advantage, it is certainly not a disadvantage either.”

Recent investments at Väro include the addition of two more screen rooms in 2011, supplied by Andritz and GL&V, to improve dirt content. This was followed by a process control upgrade, designed and implemented in-house, to produce much more consistent brightness levels. It also has the benefit that it ensures Värö does not over-bleach the pulp. This is important as over-bleaching can affect strength and consistency.

Going further back in time, the last decade has seen a transformation of Värö’s environmental profile, with a new recovery boiler, evaporation plant and causticising plant. The installation of a new lime kiln in 2014 will be the final step in a complete renewal of the recovery part of the process in just over a decade.

With carbon footprint in mind, which is of increasing concern to professional and domestic tissue buyers, these investments have not only reduced Värö’s energy consumption by up to 20%, but enabled it to become the first pulp mill in the world to operate without fossil fuels on a day-to-day basis.

It also means that Värö no longer needs to incinerate all bark to generate energy. Instead the mill dries surplus bark with excess process energy and sells it as biofuel. This still leaves sufficient excess energy from the pulping process to transform the sawdust from Södra’s sawmill at Värö into pellets which will be sold as biofuel when the pellet plant is built this year. These pellets can then also be used to replace tall oil which is used to fire the lime kiln. While tall oil is itself a biofuel and a by-product of the pulping process, it is very versatile, and can be sold as a raw-material for production of bio-diesel, thus better- exploiting its properties than the lime kiln, which can operate well with the more basic sawdust pellets.
Värö also supplies excess energy from the mill in the form of district heating for the neighbourhood town of Varberg and electricity for the power grid.

Värö is a transformed pulp mill. In a decade it has switched focus to tissue, with its premium Black Z and other suitable tissue pulps, and effectively taken on the role of bio refinery over the same period. As such it is ideally placed to face the challenges of an evolving paper market and a world which needs sustainable industry.

With demand for hygiene products forever on the increase, pulp producer...