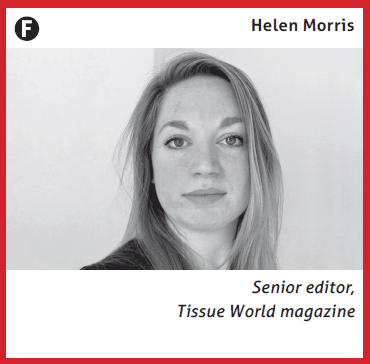 Quality, in Asia’s most developed country, is key in the Japanese tissue market … that much is a constant.

Much else, however, has moved on in the four years since TWM’s last Country Report from there, and all the signs suggest that change – paradoxically, as this is fundamentally a conservative country – is beginning to emerge as a force to influence the future.

Most of it has an undercurrent of youthful expectation, and powerful economic and demographic currents are in flux.

T&T is sharing the benefits of the latest raft of economic recovery policy. Since 2008, Japan’s economy has been through four recessions with various fiscal policy initiatives never fully lifting the nation clear.

Now, there has been strong growth for the three years after stimulus measures were put in place. Growth is coming in the form of new entries in the market. In this issue, TWM talks extensively to Manuel Dizon and Akinori Owaki, CEO international and Japan’s Universal Paper president respectively, of one of those companies – APP.

The most up-to-date national growth statistics are the best in two and a half years at 1%, and a sixth consecutive quarter has seen GDP growth. Consumer spending, traditionally the weakest point  in the economy, has risen almost 1%, again ahead of forecasts.

The household paper market is becoming increasingly robust. Shipments to hotels and commercial facilities are increasing and there is a tourism boom underway. The Olympics in 2020 and 40 million visitors are expected that year. Plus,  the uniquely Japanese fact, emergency planning in a land of tsunamis and earthquakes is also an essential practicality – stocking up for disasters which may or may not, but just might, arrive. But of the internal dynamics of the tissue market itself, our Country Report offers up startling developments. Japan’s well-established and thriving middle class in declining in number and spending power.

The rich are getting richer and the poor poorer. Tissue is beginning to reflect that dramatic shift with more emphasis on premium or economy products, less so on the middle range. Companies are innovating to meet Yen-backed demand that comes especially from young Japanese women who are prepared to pay for top quality tissue… with lotions and stylish packaging.

Japan’s unique story of tissue is detailed inside. Innovation is all very well, but TWM notes with some concern one innovation which we hope doesn’t catch on. Technological advancement and the evolution of modern bathroom facilities has some toilet seats equipped with water cleansing devices and automated warm air dryers. Nice, but these bathrooms have no toilet paper and no paper towels.