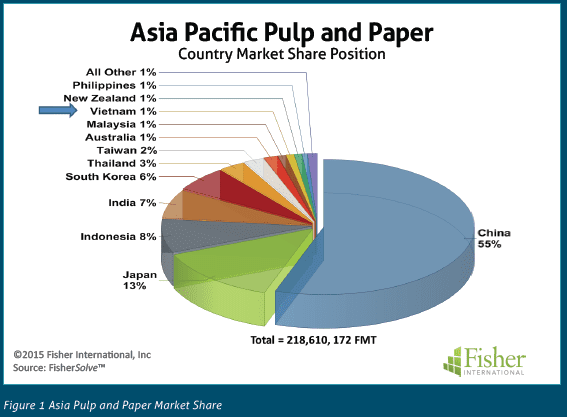 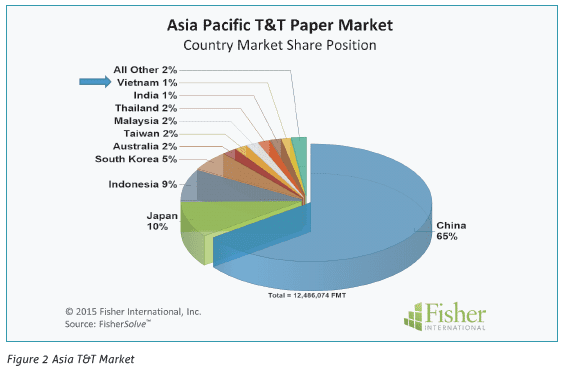 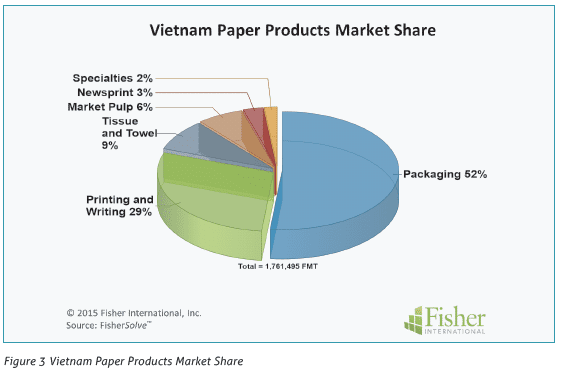 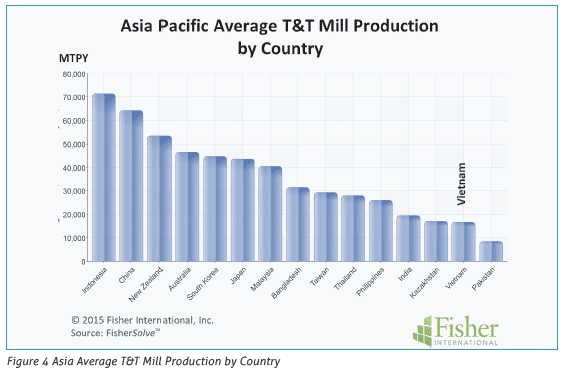 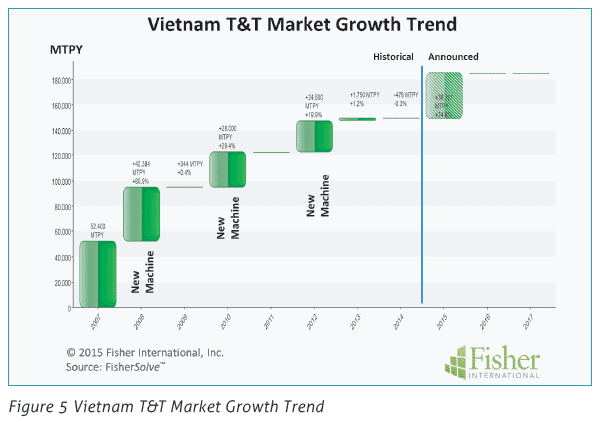 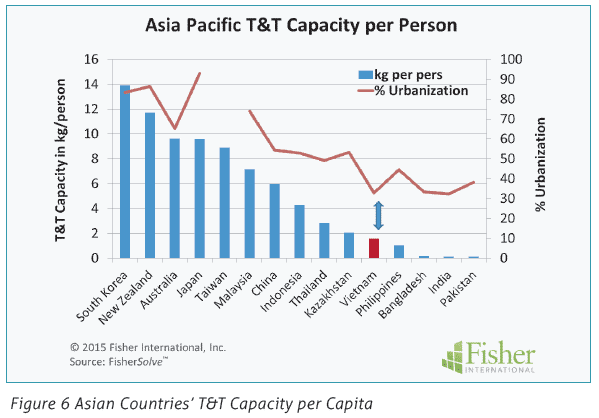 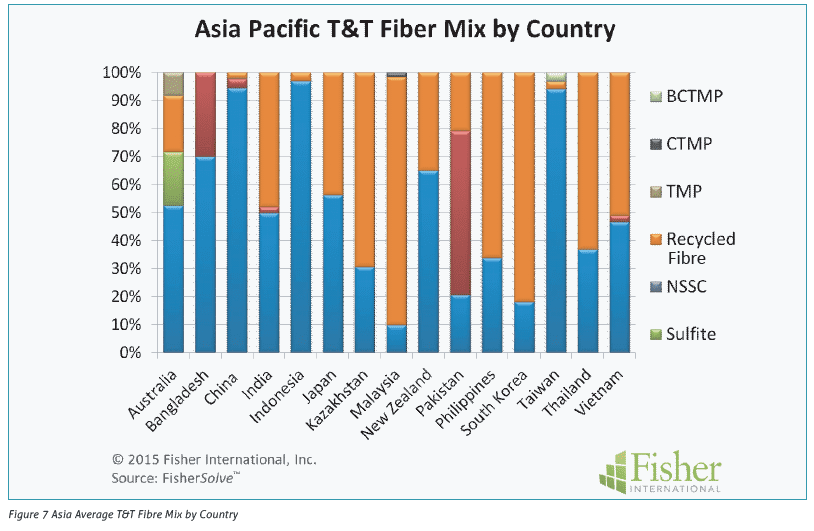 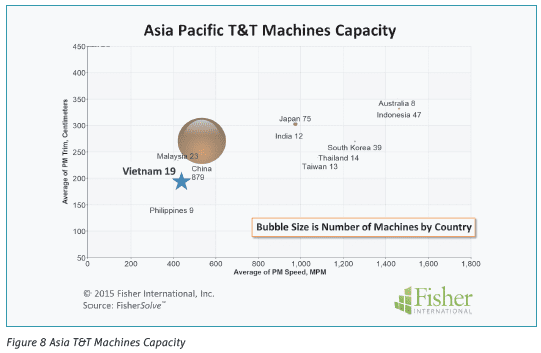 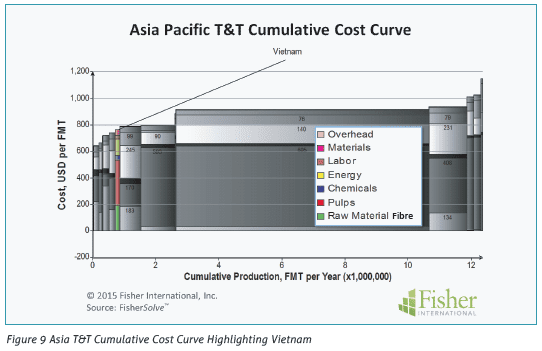 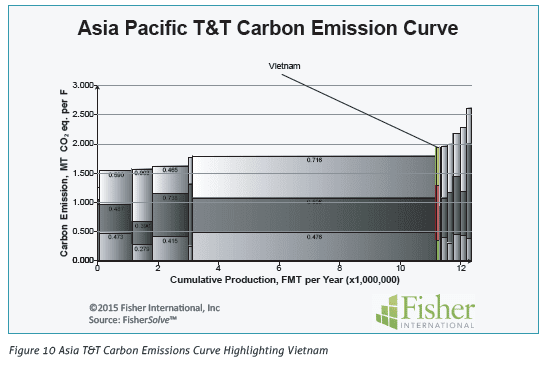 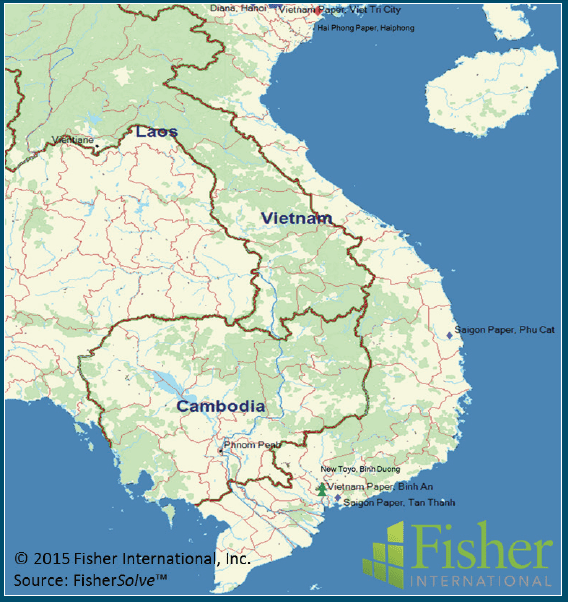 Vietnam holds a small 1% share position in both the full P&P capacity and the production of T&T products. The P&P product mix distribution within Vietnam is heavily weighted to packaging which makes up more than 50% of the country’s capacity. There is also a considerable printing and writing presence at nearly 30%. T&T ranks third in major grade market share hierarchy at 9% (Figure 3).

A more in-depth look at Asia Pacific T&T mills indicates mill capacities for all but the largest producing countries are relatively small throughout the region. Average T&T mill capacities for the largest producing countries are in the 60,000 to 70,000MTPY which is first quartile in the Asia Pacific region and globally. Vietnam’s average mill capacity is ~18,000MTPY placing it in a fourth quartile position in the region and globally (Figure 4).

Historic capacity trends are as important as current capacity and market share for understanding T&T production within a country. Vietnam has been growing its capacity at a steady albeit modest rate over the past seven years. Announced projects set to come on line this year suggest the growth trend will continue at the same rate (Figure 5). The question is whether there is potential for even more capacity in the future.

Vietnam’s population in 2009 was 89.7 million people and current estimates elevate that to about 95 million. Looking at current T&T capacity and using current population estimates, the per person T&T consumption rate is 1.58 kg. This level of usage places Vietnam significantly off the market penetration of many Asia Pacific countries suggesting significant potential for growth.
There are many factors that influence market penetration. Some of these include the number of people at various income quartiles, cultural behaviours, access to alternative solutions and age demographics to name a few. Another factor may be degree of urbanisation within the country.

Shifting from a rural to urban concentration appears to tell us something about acceptance and dependence on T&T products. Vietnam’s population is just short of 40% urbanised while T&T capacity is less than 2 kg/person. Countries like South Korea and New Zealand have 70% urbanisation rates and capacity per person is up in the 12 to 14 kg/person level (Figure 6). If urbanisation is a factor in itself or surrogate for a combination of factors, it does suggest that growth may be dependent on a structural shift from rural to more urban environments.

Fibre sources and machine specifications are the two commonly considered dynamics for understanding T&T production. T&T fibre mix in the Asia Pacific countries represent a diverse set of strategies ranging from primarily recycled fibre in Malaysia to mostly kraft in China. Vietnam is nearly balanced between recycled and kraft (Figure 7). Machine configurations also vary considerably in the region. Machine speeds and trims are significant indicators in assessing the competitive position of T&T production. In the Asia Pacific market, machines tend to be uniformly narrow (2.5 – 3.5m) in trim. Speeds, on the other hand, range from slow (400mpm) to moderate (1,500mpm). Vietnam’s machines average on the lower end of both categories, but competitively the bulk of machines in the Asia Pacific Region are of similar size (Figure 8).

In the end, cost competitiveness will have the greatest influence on a mill’s ability to compete against other mills within the country and internationally. Within the Asia Pacific region there is a fair degree of competitiveness based just on cost positions. Vietnam has a good cost position against the market leader, China, but shows some vulnerability against a rapidly growing Indonesian T&T business (Figure 9). Fibre cost is key to an advantage against both China and Indonesia where Vietnam integrates recycled into its furnishes and where the other two are more dependent on purchased kraft.
Vietnam’s carbon footprint is a potential future cost issue; it has a heavier carbon load than the China and the three other higher market share countries: Japan, South Korea, and Indonesia (Figure 10). Coal dependence in its fuel mix will be the key consideration for Vietnam as carbon regulations become more constraining.

The source for market data and analysis in this article is FisherSolve™. Data tables behind Figures 1 – 10 can be obtained from Fisher International. E-mail requests to [email protected]

FisherSolve™ is the pulp and paper industry’s premier database and analytics resource. Complete and accurate, FisherSolve is unique in describing the assets and operations of every mill in the world (making 50 TPD or more), modelling the mass-energy balance of each, analysing their production costs, predicting their economic viability, and providing a wealth of information necessary for strategic planning and implementation. FisherSolve is a product of Fisher International, Inc. For more information visit: www.fisheri.com or email [email protected] USA: +1-203-854-5390..