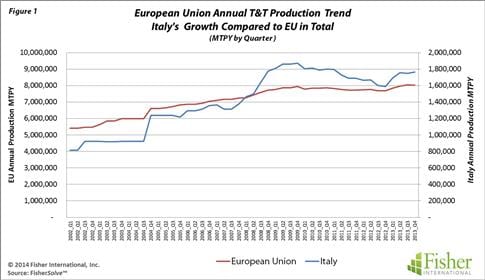 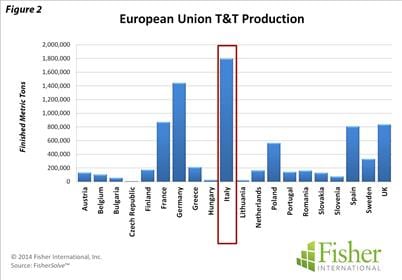 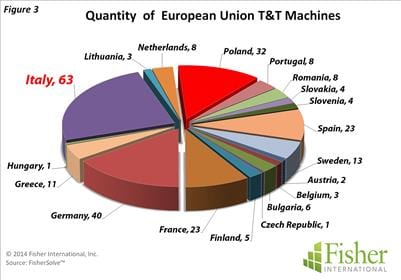 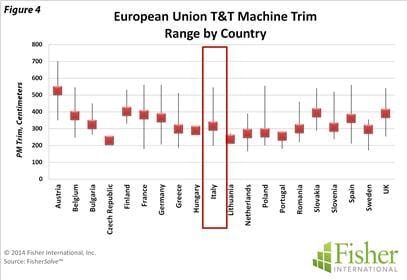 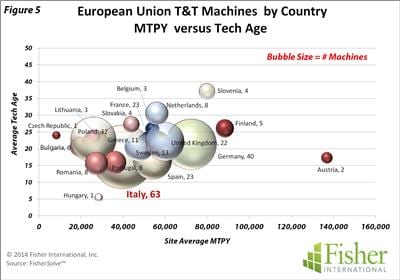 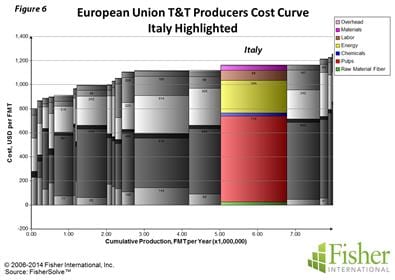 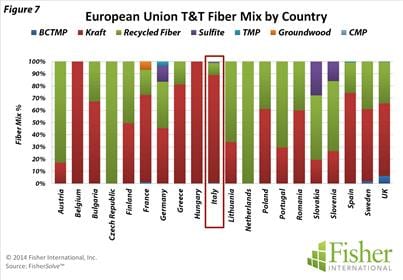 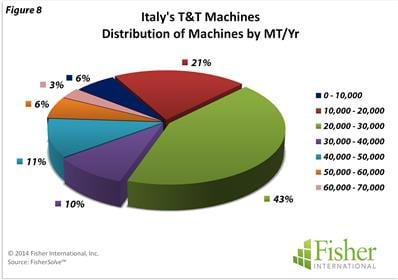 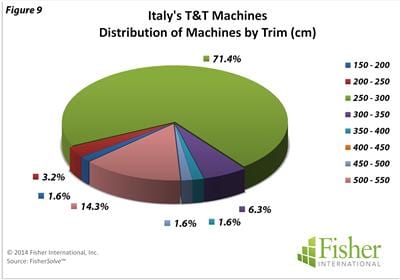 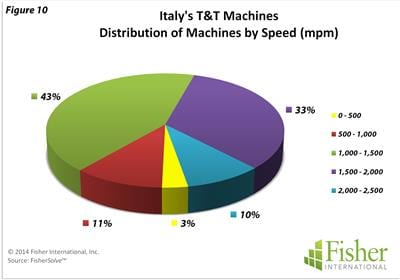 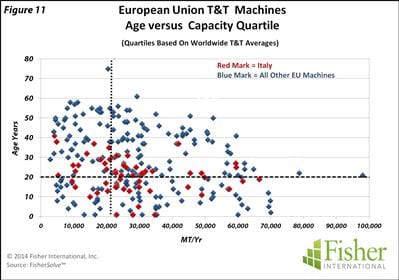 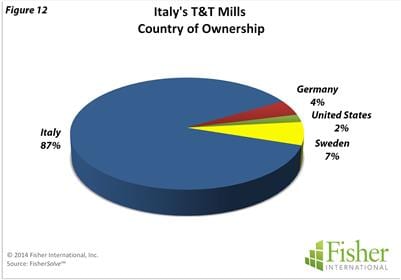 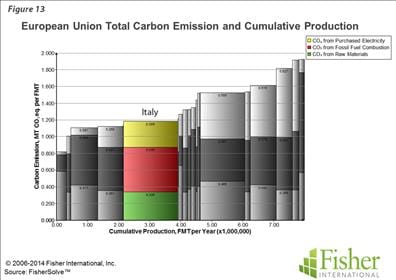 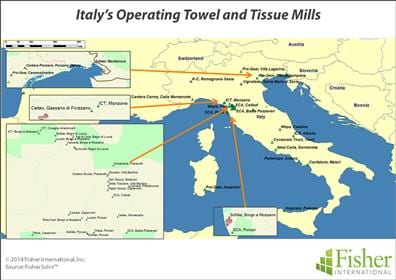 Italy has been experiencing persistent economic problems with sluggish growth, high unemployment and regional disparities in prosperity. The Italian economy is driven in large part by the manufacture of high-quality consumer goods produced by small and medium-sized enterprises, many of them family-owned. This model is somewhat true of Towel and Tissue (T&T) production as well, with many small mills owned by local companies.

With a population of about 60 million, Italy is the fourth largest economy in the EU (behind Germany, France, and the UK), but exceptionally high debt and structural roadblocks to growth make it vulnerable to economic hazards. Public debt has been increasing since 2007 reaching over 130% of GDP in 2013. But concerns seem to be relaxing as the European economic crisis subsides, which may allow Italy to get back on a positive growth trend.

Italy is Europe’s largest producer of T&T making nearly 1.8 million MTPY. That means Italy represents about 22% of the EU’s capacity. Italy’s T&T growth rate was outpacing the EU up until the global recession hit in 2009. At that point, growth halted both in the EU and for Italy. Subsequently, continued economic issues appear to have held growth flat to slightly negative while the EU is managing to maintain very modest growth (Figure 1).

Italy’s T&T mills are geographically dispersed throughout the country with the largest concentration in the Tuscany region (Map 1). As the largest producer of T&T in the EU (Figure 2), Italy has the greatest number of operating machines outnumbering the next largest country by more than 20 machines (Figure 3). T&T machines in the EU vary from narrow two-metre machines to six metres. Machines in Italy are no exception in terms of the trim range for the region, with the average being 3.2 metres (Figure 4). Mill production in Italy is, on average, on the low side compared to other producing countries in the EU at nearly 40,000 MTPY while the technical age of Italian machines is about average (Figure 5).

Machine speeds are split at 60% and 40% for machines below and above the 1,500 mpm mark respectively (Figure 10). Only 10% are running above 2,000 mpm. Capacity-wise on the international scale, Italian machines bias above the worldwide average technical age and production rate. However, there are very few machines in the new high capacity category (Figure 11). While Italy’s T&T business has some international players, ownership is predominantly local with 87% of the mills being headquartered within Italy (Figure 12).

In today’s world, a country profile would not be complete without looking at environmental impacts. Fisher International has recently added a carbon database and benchmarking tool to its FisherSolve™ modelling of the Pulp and Paper Industry. Carbon modelling results for the EU indicates a weighted average of 1.181 MT CO2-eq/FMT for cradle-to-gate emissions. Comparatively, the worldwide weighted average for T&T is 1.613 MT CO2-eq/FMT. Not only is Italy’s T&T carbon footprint below the worldwide average, it is also well below the EU average as can be seen on the European Union Carbon Emission Cumulative Production Curve (Figure 13).

Fisher International has supported the pulp and paper industry for over 25 years with business intelligence and management consulting. Fisher International’s powerful proprietary databases, analysis tools, and expert consultants are indispensable resources to the industry’s producers, suppliers, investors, and buyers worldwide. FisherSolve™ is the pulp and paper industry’s premier database and analysis tool. Complete and accurate, FisherSolve is unique in describing the assets and operations of every mill in the world (making 50 TPD or more), modeling the mass-energy balance of each, analyzing their production costs, predicting their economic viability, and providing a wealth of information necessary for strategic planning and implementation. FisherSolve is a product of Fisher International, Inc. For more information visit: www.fisheri.com or email [email protected] USA: +1-203-854-5390 [/box]