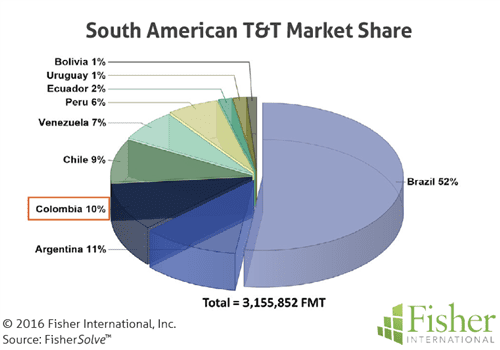 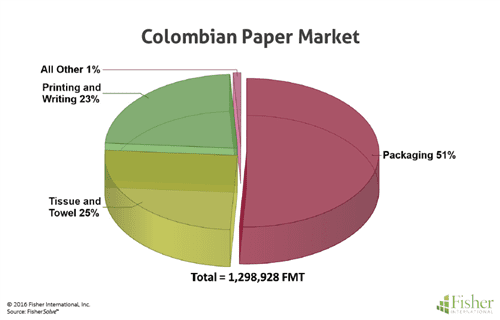 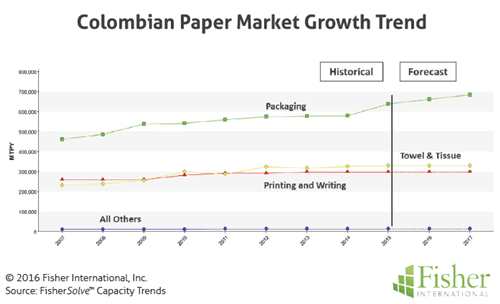 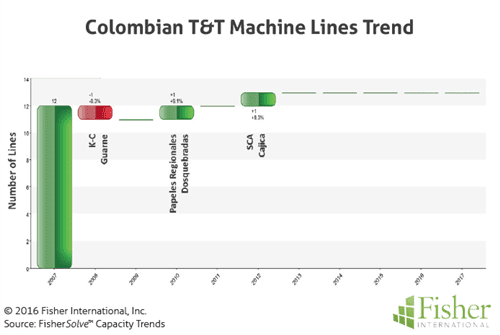 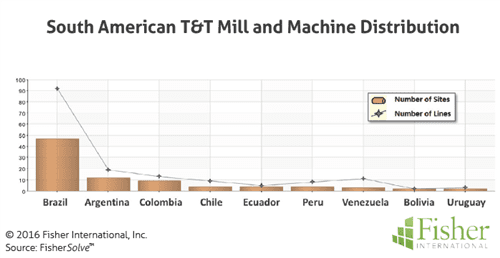 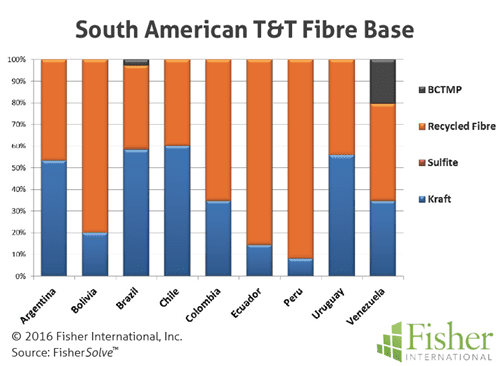 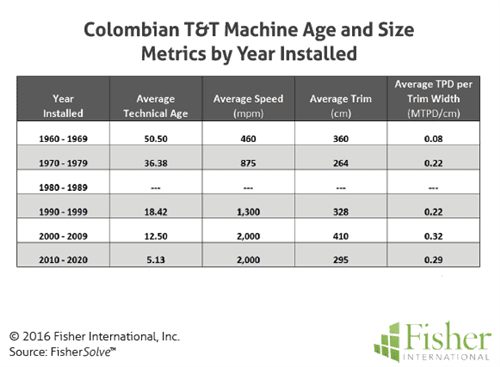 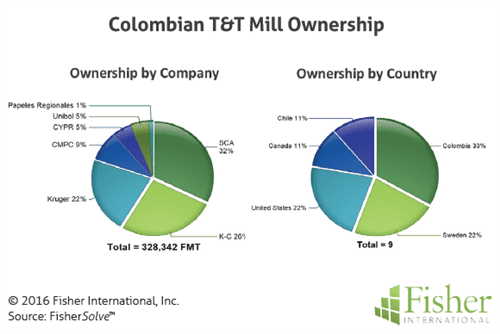 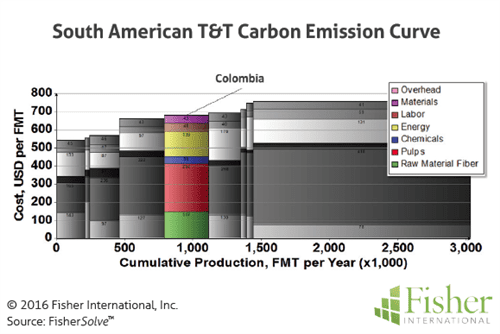 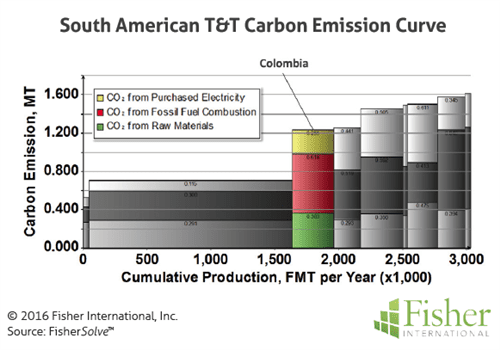 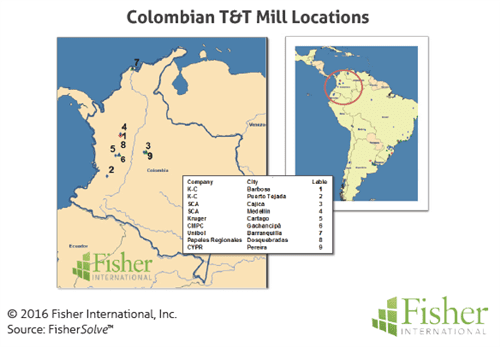 Colombia, the second most populous country in South America (with ¼ the population of Brazil), has been in the midst of a demographic transition with steady declines in its population growth. Over the past several decades, the birth rate has fallen significantly to just above replacement level today. At the same time, forced internal displacement of millions, due to ongoing conflicts between paramilitary groups and the Colombian government, is prevalent and disruptive to economic progress. But despite such adverse circumstances, industrial growth clocked in at a respectable 4% in 2015. Paper, in general, is an underdeveloped commodity with Colombia being a net importer of paper products. Colombia’s towel and tissue (T&T) business, the focus of this article, holds a somewhat small market share of 10%, in relative parity with several other like-sized South American countries, but very small compared to the market leader, Brazil (Figure 1). Within Colombia, the paper industry is focused on three major grades of paper: packaging, T&T, and printing and writing. Packaging represents about 50% of the industry while T&T and printing and writing represent about 25% each (Figure 2). The growth trend suggests that packaging, the most important paper grade for the country, has been increasing at a cumulative average growth rate of 4.15% since 2007. Announced new capacity will maintain that rate for the next couple of years. T&T growth rate was on the same trajectory early in the period, flattening out in recent years (Figure 3). Looking in more detail, there were 12 T&T machines operating in 2007 with some up and down fluctuations over the subsequent years – the shutdown of K-C Guarne in 2008 and the addition of two lines in 2010 and 2012 bringing the total number of lines to 13 today (Figure 4). Currently, there are no announced new machines in the works. As expected, the distribution of T&T mills by country favours Brazil with 47 mills and 92 paper machines. Argentina is second in the number of mills (and market share) with 12, as well as number of machines with 19. Colombia follows third with 9 mills and 13 machines (Figure 5). The fibre base throughout South American T&T mills is moderately biased toward recycled with tissue producing countries favouring virgin fibre. Colombia is more heavily invested in recycled averaging in excess of 60% (Figure 6). T&T machines in Colombia are a mixed bag with regard to technical age (actual age adjusted for upgrades). Nineteen sixties- and seventies-era machines have undergone only modest upgrades resulting in average technical ages (50 and 36 years, respectively) that are roughly the same as their actual ages (Figure 7). This absence of upgrading is somewhat surprising. Average speed, trim and production rates are modest (Figure 7) and characteristic of locally focused operations. Interestingly, mill ownership indicates significant international investment by companies like SCA, K-C and Kruger (Figure 8). In fact, foreign ownership represents nearly 2/3 of the operations. Swedish and USA companies have two mills each while Chilean and Canadian companies have one each (Figure 8). Colombian T&T has a solid competitive cost position within South America with an advantage of nearly US$100 per metric ton against the top producer, Brazil, and near parity to Argentina and Chile, the next biggest shareholders (Figure 9). Raw materials, fibre and pulp combined account for much of the cost advantage versus Brazil. Carbon emissions is often considered along with cost as an indicator of potential future capital and operating mitigation costs that could impact overall cost position. Brazil and Uruguay have a clear carbon advantage over Colombia and other South American T&T producing countries (Figure 10). Fossil fuel use (including about 15% coal) and purchased power account for most of Colombia’s disadvantage. Nevertheless, Colombia has a favourable competitive emission position against most South American producers. The source for market data and analysis in this article is FisherSolve™. Data tables behind Figures 1 – 10 can be obtained from Fisher International. E-mail requests to [email protected]   About Fisher International, Inc. Fisher International supports the pulp and paper industry with business intelligence and management consulting. Fisher International’s powerful proprietary databases, analysis tools, and expert consultants are indispensable resources to the industry’s producers, suppliers, investors, and buyers worldwide. FisherSolve™ is the pulp and paper industry’s premier database and analytics resource. Complete and accurate, FisherSolve is unique in describing the assets and operations of every mill in the world (making 50 TPD or more), modeling the mass-energy balance of each, analyzing their production costs, predicting their economic viability, and providing a wealth of information necessary for strategic planning and implementation. FisherSolve is a product of Fisher International, Inc. For more information visit: www.fisheri.com or email [email protected] USA: +1-203-854-5390