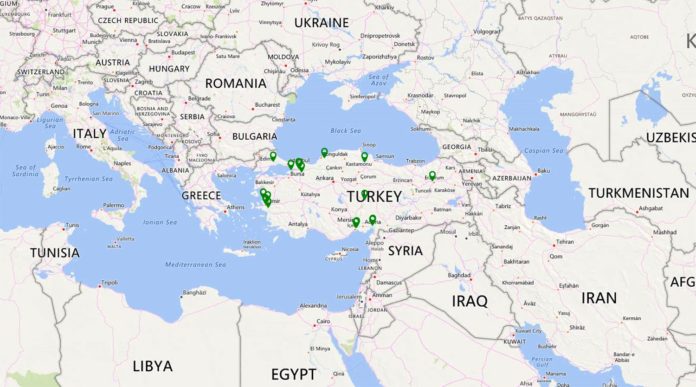 Even with the country’s currency challenges, rising unemployment and pandemic insecurity, its regional position remains robust and poised to survive and thrive.

Turkey was the subject of this column just two years ago. Critical concerns at that time were the weakness in the Turkish lira and rising costs of imported pulp. Tissue pulp prices reversed their climb at the end of 2018, and now the COVID-19 pandemic is reducing demand in grades other than tissue and packaging. However, the Wall Street Journal reported that the Turkish lira hit a record low versus the US dollar on August 6, 2020, as the virus crisis increased pressure on emerging market economies.

This will make Turkey’s tissue exports look more attractive but will also raise the apparent price of pulp imports for tissue making. It is also expected to result in higher consumer inflation and
interest rates.

Turkey’s economy has slowed somewhat after a 7.4% jump between 2016 and
2017. GDP per capita is shown as blue
bars in Figure 1 below. The population is growing by about 0.45% in 2020. Together, these statistics support the continued growth of the overall domestic tissue market in Turkey.

The next set of economic metrics are less supportive for continued tissue demand growth. The inflation rate (shown in Figure 2 as blue bars) has accelerated in the past several years, while unemployment has steadily increased from 2012 to 2018. Unemployment leaped in 2019 from 11 to 14% and has likely worsened in 2020 with the COVID-19 pandemic.

These economic statistics in Figure 2 run counter to Figure 1 and do not support the continued growth of tissue consumption per capita. However, tissue exports will continue to support tissue business growth.

Turkey imports relatively low volumes of tissue compared to its exports. Tissue imports peaked in 2011 and have been on a downward trend ever since. Germany remains the most significant supplier of tissue to Turkey as imports have declined, as shown in Figure 3.

Turkey’s tissue exports are growing while imports diminish. The 2019 bar shown in Figure 4 is a little off-pace as it shows a reduction of trade with Greece and Georgia. However, exports from Turkey are still running about 500% of import rates based on performance between 2016 and 2019.

Turkey continues to grow as a tissue exporting nation while the domestic consumer base is growing.

Turkey’s tissue business growth can also be seen in the net increase in the number of tissue machines shown in Figure 5. There was a net increase of ten machines from 2007-2017, including a group of five added between 2014 and 2015.

One more machine will come on-line in 2020, and four have been announced for 2021 startup. These additions will result in a large and relatively new tissue fleet for Turkey, and some Turkish tissue companies have also started to build capacity in other countries.

Turkey’s tissue capacity is heavily focused on consumer grades of towel and tissue as shown in figure 6. There is a relatively small amount of commercial tissue and almost insignificant specialty tissue production, as consumer bath tissue accounts for nearly half of the tissue-making capacity.

It is possible, however, that some of the tissue imports from countries such as Germany could include more commercial tissue products.

Turkey imports a significant portion of its fibre needs. Figure 7 shows that external fibre purchases for the consumer grades range from 40%-50% for virgin baled pulps.

Figure 8 shows more detail on Turkey’s fibre purchases for tissue making.
A wide variety of northern and southern kraft hardwood and softwood pulps
are purchased along with eucalyptus.
This suggests that Turkey is carefully blending fibres from a variety of sources
to control costs.

Turkey’s integrated internal fibre sources are based on recovered papers. Slightly more than half of the fibre is deinked and bleached, but Figure 9 shows a surprising amount is not deinked and remains unbleached.

Turkey’s tissue machines are relatively modern given all of the new construction in the past decade. Figure 10 shows the relative quality of Turkey’s machines compared to the set of countries that import from Turkey.

Turkey’s tissue business is in a relatively reasonable cost position compared to the countries that import its tissue production. Ukraine, Syria, and Bulgaria are lower in cost per tonne, but relatively small producers. The stacked bar chart shown in Figure 11 reveals that pulps cost is the primary driver of turkey’s overall cost position.

This is probably due to its relatively weak currency. However, the other cost categories are well in control to keep the tissue business competitive for exports. If Turkey had an internal source of fibre beyond the amount of recovered wastepaper it already uses, Turkey could have a robust competitive cost position.

Viability analysis of the same set of countries shows Turkey’s relative advantages in a more dramatic view in Figure 12. By any of the factors used in the FisherSolve Next™ viability analysis, Turkey has the most robust tissue business for the future.

We expect that Europe will be enforcing a carbon emissions regime soon that could impact Turkey’s exports. Figure 13 shows the emissions per tonne of finished tissue for each of the countries in this set. Ukraine is lower because the carbon from purchased electricity is significantly lower. Turkey is in the middle of the group, below the United Kingdom, Greece, and Syria. This appears to be neither an advantage nor a disadvantage for Turkey’s tissue business.

Figures 14 and 15 show the current effects of the COVID-19 pandemic on the selected tissue trading partners as of August 2020. The UK mortality rate stands out from the others, and Turkey is in the lowest set of active cases per million of the population.

While no country can claim absolute safety in the long run, Turkey has weathered this crisis better than most.

Despite Turkey’s currency challenges, its tissue business appears poised to survive and thrive. The high cost of imported fibre in local currency seems to be under control, and new tissue capacity provides excellent commercial viability for the future.