Futura’s Tango line has been lauded as the latest breakthrough in high efficiency, value- adding technologies. It marked the debut of the latest JOI Technology; the first embosser to feature a steel-marrying roll instead of the industry standard rubber roll. Now, almost a year since its first installation, TW gets a progress report.

When Futura designed the Tango Roll using the patent-protected JOI embossing technology, it said it had developed something with the potential to revolutionise a vital aspect of tissue converting. With nearly a year’s operation under its belt, Futura’s R&D and customer relations director Giovacchino Giurlani says it’s no longer theoretical.

The Tango Line was started up in the third quarter of last year at Argentina’s Papelera San Andrés de Giles, where the company said it provides nested embossing solutions with the design flexibility and ease of operation at volumes nearer those associated with point-to-point embossing products.

Papelera San Andrés de Giles uses the line to produce kitchen towel and toilet tissue; point-to-point configuration is used for toilet tissue products, and the JOI embosser, can achieve the switch from nested to point-to-point in as little as one hour, compared with a whole shift on conventional lines. For such applications, a “random” point-to- point solution has been developed, which the company says allows more creative decoration and greater softness than normal point- to-point allows due to the reduced glue requirement. 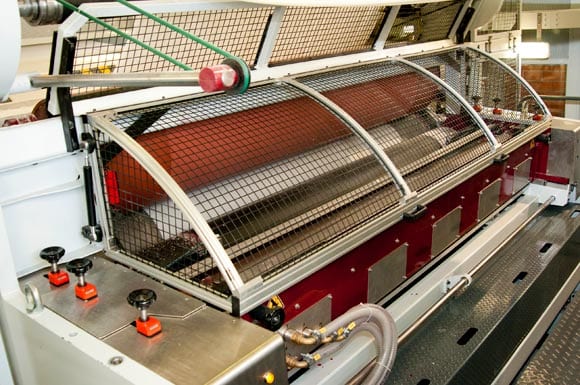 Giurlani says that in different operations around the world, the JOI technology and the Tango Roll have demonstrated the capability to produce the highest quality towel without inner ply deterioration or product contamination. Most importantly, this is achieved with a finished roll diameter result that is “as good as that of a Point to Point unit without the complication, the pattern limitation or any negative impact on paper and product characteristics”.

As with most technologies, Giurlani says it’s fairly straightforward to map the evolution of embossing. In the 1980s, kitchen towel was subjected to a point-to-point process, while toilet tissue was produced with a simple embossing technique. The 1990s saw kitchen towel move to the new nested technology, while toilet tissue graduated to décor embossing. The Noughties witnessed the race for flexibility, and the JOI embosser was launched in 2009.

“We reached a point when we asked ourselves whether it was still possible to improve the nested lamination process using the conventional rubber marrying roll,” he adds. “For us, the JOI 013 represents a true evolution in embossing technology offering the possibility of using the Tango steel marrying roll.”

Why a steel marrying roll?

What is so problematical with the rubber marrying roll? “It’s a question of what is optimal,” Giurlani says. “Steel is optimal. The theoretical advantages of a steel marrying roll have tempted the converting industry for a long time because with a steel roll, superior nip control means there is no difference between the embossed surfaces of the tissue. Bulk and quality are absolutely preserved, roll cleaning is easy with the use of a doctor blade and the re- embossing effect is eliminated.”

He adds that the JOI roll operates a steel-marrying roll without incurring the usual problems as it does not deflect, and this is the key to its success and its revolutionary potential. “What made non-deflection impossible to achieve was the roll design and the natural deflection of its material, this resulted in increased pressure on the edge of the web and reduced pressure in the middle. We have overcome this by transferring the deflection from the shell to the shaft where it does not affect tissue characteristics. After rigorous testing in production, we have won an important technical challenge.”

JOI also features roll temperature control technology and the Tango roll is driven. Through technical innovation, the barriers to steel marrying rolls have been overcome and converters can enjoy reduced cleaning, the elimination of final product contamination, improved inner-ply pattern definition with bulk retention, and reduced maintenance. Giurlani says this can be done safety because self-guarded lamination unit which allows operators to access the laminating area while the machine is running.

There are implications for converters in terms of specific embossing techniques; nested embossing has always been associated with more design flexibility, but has been held back because it cannot offer the product volume performance of a point-to-point. “Today, runnability, bulk and reduced maintenance brought by the Tango steel marrying roll has suddenly put nested embossing in a new category,” Giurlani says. “Kitchen towel manufacturers can use great embossing patterns without sacrificing efficiency, paper characteristics and finished rolls diameter. The potential to add value to kitchen towel will transform the market.”

He says that the JOI 013 represents a landmark also in random point-to-point embossing. Converters can achieve far more imaginative decoration than is usually associated with normal point-to-point embossing technology. Giurlani adds: “This means that for toilet paper production, the lack of softness associated with point- to-point is limited because of the reduction of gluing points. Converters can now emboss the outer ply without compromising softness and, in short, toilet paper producers can achieve a softer roll which looks better.”

He says that JOI 013 has undoubtedly changed the rules for embossing. “We never stand still and we consider all technology to be a work in progress. We are determined to make the line even more accessible, safer and easy to operate. The big challenge today in converting is the logistics around the line and its layout efficiency. This is an important focus for us in the near future.”