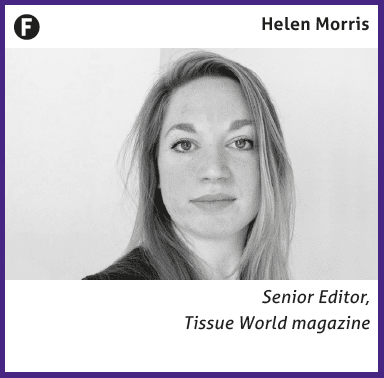 Our cover image depicts the US tissue battlefield. The reds strategically occupying the hill represent all we know of the status quo. For many decades the industry in the USA meant few giants monopolising the market in both manufacturing and retail. The environment was not a concern, NGOs not that powerful, and the economy was good.

Then the market began to change. New players started crowding the picture… private label, cheaper resources, aggressive discounting and marketing across the segments. These are the whites on our board, down the hill and facing a climb. The challenges, opportunities and the alternatives have been simmering for a long time and now the fight has become clearer.

Dedicated chess fans will recognise the opening to the game as the white Smith–Morra Gambit against the red Sicilian Defence. The Smith Morra Gambit is a sharp and aggressive line against the Sicilian Defense. A gambit (from ancient Italian gambetto, meaning to trip) is an opening in which a player sacrifices material, usually a pawn, with the hope of achieving an advantage. The gains may take time to come through. Bobby Fischer was famous for thinking 30 moves ahead.

Of course, it will not be just sacrifice comprising the white strategy: innovation, M&A, intelligence, investment, on-line selling, partnerships, dedication, hard work… will be essential. And the reds too are formidably equipped.

Structural changes are underway and the economy is sluggish while income for many is stalled. Overcapacity looms, there are budget cuts to education, energy and healthcare. Where is the consumers’ price ceiling? Will an America First strategy work? Over-crowding in the market. Smart mills… contested resources. The issues are many.

Inside, TWM sets out the intelligence which will help to plan your next move.

Machinery is showing its age

Expanding our review across all latitudes, our Technical Theme on Paper Machines interviews the world’s tissue machinery suppliers. Among them, Francesco De Biasi, GapCon director, identifies demand: “The US market is one of the more interesting in terms of opportunities. The market has still some margin of growth in terms of production but the average age of existing machines is quite elevated. We see a big potential in rebuilds.” He highlights headboxes, crescent formers, press sections, heat recovery, steel cylinder Yankees and reel sections among others.

And in Miami we hear from South Florida Tissue Paper Co president Juan Corzo III whose company was listed for a second year in Inc. Magazines’ top 5,000 fastest growing US companies after tripling sales from 2014 to 2017, notched up a growth rate of 179%, and expanding to service all 50 states. He attributes the success to several factors including: “Focusing on larger accounts, bettering service to our customers, producing better quality product, and cutting costs through efficiency in new machinery.” Many more details in ExitIssues.

Suzano, Valmet, LKW WALTER and Fibria were amongst the winners of Sofidel’s second Suppliers Sustainability Award. Some 330 participants from 17 countries attended the event, held on 9 November at the magnificent East Wintergarden venue in Canary Wharf in the financial heart of London. Supported by the Italian Ministry for the Environment and Protection of Land and Sea, the award was created to encourage, spread and capitalise on best practice and improvement activity carried out by the group’s suppliers each year.

Egypt and Jordan: progress against the odds