Catanchem’s Gerhard Viljoen and aquaTECH’s Julien Arnold and David Hunkeler consider how to make savings, and get the most from the mill

When tissue grades with high wet-strength resin (WSR) are being produced, the white water is generally quite clean, and frequency of sheet breaks is low, irrespective of the grammage. This good “runnabilty” is commonly observed when manufacturing towel grades.

However, for bathroom tissue with no WSR, or facial and napkin grades with low WSR addition levels, the white water often has to be purged, either continuously or periodically. Indeed, mills sometimes switch production to towel grades as a means of cleaning up the white-water.

The POLYMAC technology which will be discussed here was designed to provide the advantages of WSR, without actually adding wet strength, thus permitting production of bathroom, facial and napkin grades at higher speeds with lower energy. This is accomplished by rapidly cleaning the water while retaining fibre and fines, except the ash which would reduce brightness.

This technology was initially introduced about five years ago and is now running in numerous mills in Europe, the Americas, Asia, Africa and the Middle East. Because it improves the dewatering considerably (Figure 1), the sheet goes onto the Yankee with less moisture. This typically has the effect to reduce steam consumption by 1-6%, while also decreasing the gas to the hood and even electricity use, principally due to slower recirculating fan speed.

On drying-limited machines, this saving in energy allows faster speeds with some mills reporting increases up to 140 mpm. On tissue machines that are already running at their mechanical speed limit, the energy savings become pure profit. Clearly the same machine, making different grades, can operate both in a drying-limited or speed-limited mode, so from day to day a production increase or energy reduction, or a combination thereof, can be achieved.

On machines with 50tpd production, quite small by modern standards, pulp savings can be over 1tpd, corresponding to a yield improvement of 2%. This occurs because POLYMAC retains more fibre and fines, as best evidenced by an increase in the first pass retention of 5-15%. This has an effect of cleaning the water with typical white water solids levels lowered by approximately 200-400ppm (Figures 2a and 2b). This number is important as, with pulp costs at about USD 600-900/tonne, the fibre savings alone pay for the POLYMAC and the application of this “runnability aid” gives an immediate net positive payback, rather than being a cost. 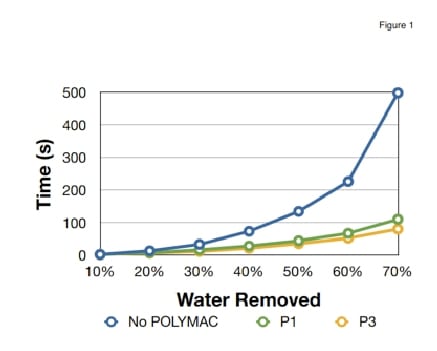 When POLYMAC is applied, the benefit in retention is evident within the first few hours. However, the water loop is large and can typically require four days to clean fully. The increase in retention is concomitant with a reduction in break frequency. As there is less process waste (difference between hard and soft roll production), the standard deviation in daily productivity can be reduced from 7tpd to less than 2tpd.

Less chemicals recycling in the broke also provide advantages in the pulper. The post-press-roll consistency (PPRC) can increase by 1-2%, in cases where the machine does not speed up and there is often a reduction in dusting and an improvement in softness, though these are supplemental benefits.

The main role of POLYMAC is to clean the white water and improve drainage. In doing this, it increases production and yield, while requiring less energy. Life Cycle Assessments are under way with American universities to quantify the environmental impact of tissue made with POLYMAC. The key environmental impacts of tissue production are due to production of pulp as well as energy use in manufacturing. These contribute more than two-thirds of the total global warming potential, ozone depletion potential, acidification and human toxicity. Virgin pulp receives an environmental credit from burning the byproducts from wood not used in pulp. Therefore, the environmental advantage of energy reduction will be larger for recycled furnishes, though still quite positive for virgin sources as well.

One method to ascertain if a product is working is an “ABA” trial, which involves defining a set of key performance indicators (KPIs) and measuring them for several days before a trial begins, as well as monitoring their change during the application. Most important, from a tissue perspective where
performance often improves with time as a felt wears in, is to record the regression in the KPIs after the chemical is reduced.

Figure 3 is such a plot from a virgin fibre mill running one of the newest tissue machines in the world. The increase in first pass retention is obvious with POLYMAC. Even more persuasive is the reduction FPR observed when the dosage is reduced. One will also see, within hours, an increase in the steam and gas use.

Figure 4 shows plots of production from an integrated mill where the white water loops are shared between machines. Data are for one month without and with POLYMAC, the maximum which could be obtained on the felts. On average the production increase observed is 5tpd. In this mill POLYMAC also permitted the use of some levels of recycled furnish, lowering cost.

Table 1 is a case study of a mill using secondary furnish with a capacity of 75tpd. This machine cannot speed up. The gas, steam and energy savings are 2, 3 and 5%, respectively. This corresponds to a total savings of approximately USD 2/tonne of tissue or USD 225/day. The use of pulp is reduced 1.4tpd and this equates to a cost lower by 12 USD/tonne or USD 919/day. Even though the machine cannot speed up, the lower frequency of the breaks results in an average increase
of production of 0.4tpd (USD 400/day).

Overall the cost reduction is USD 21.08/tonne at a POLYMAC cost of 6.50 USD/tonne, for a net savings of USD 14.58/ tonne or USD 1,094/day. The benefits of POLYMAC are larger on faster machines and are typically dominated by pulp savings and higher production rates. The energy savings, though significant, are secondary and the cleaner white water has tertiary effects such as in a reduction in the flocculant use in the water treatment plant. 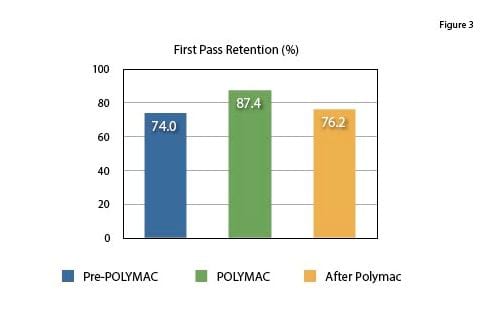 Tissue consumption has increased by 3.9% per annum over the past two decades. In 2012 its production surpassed, for the first time ever, that of writing paper. The industry has a mixture of old and new machines and is an excellent example of where the economic and environmental benefits of technical improvements align.

It has been a common practice for mills to use high levels of fresh water. Often 30-70% of the 60m3 of total water required to make one tonne of tissue is fresh water.

Machines, however, can run more energy efficiently with fresh water levels reduced to the 7-15 m3 per tonne levels, and the higher recycled water can improve the felt life. Each day of extended felt life provides a direct savings of approximately USD 500 and an indirect cost reduction of another USD 200, since new felts tend to require low speeds for the first week.

The lower energy consumption that comes with improved dewatering not only reduces cost quite considerably, but also can lower global warming potential (though it remains to be precisely estimated) on the order of 5 kg of carbon dioxide per person per year. Putting this into perspective, the global warming savings in producing tissue with less energy is about half of the CO2 generated for personal water consumption. Making more energy-efficient tissue obviously, a key positive environmental impact.

Toilet paper consumption is growing rapidly. If it can be produced with thrifty use of water and energy, at high speeds, this can both extend the capital investment in existing equipment, while exploiting the high speed capacity of new equipment. POLYMAC is designed to help tissue machines run more economically and faster. It is an innovation and represents a molecular design specific to the needs of the fibre being used. Various grades exist for virgin and recycled fibres, with some oriented more at dewatering and others at retention, though all do both. 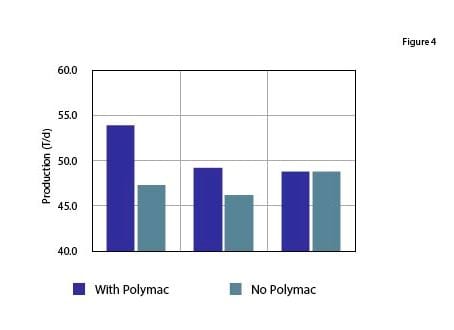 Gerhard Viljoen is the chief executive of Catanchem, Julien Arnold is director of technology at aquaTECH and David Hunkeler is a director at aquaTECH. Polymac has been developed by Catanchem and aquaTECH specifically for the tissue industry. It is produced in Geneva. The inventors of POLYMAC are the authors of this article.