Russian tissue consumption showed a very strong growth pattern from 2000 until 2012, with an average growth rate of close to 10% per year. But since 2012, many things have changed, and in 2015 the economy fell into a deep recession.

Plummeting oil prices, international sanctions due to the annexation of Crimea and capital flight have reduced investment, domestic consumption and imports. The large depreciation of the ruble has pushed inflation to double digits and reduced real incomes, especially of the poorest. This situation has changed buying habits of the middle class and negatively influenced the tissue business.

Tissue consumption grew by 11.1% in 2012, and then more slowly by 6.6% in 2013 and 5.0% in 2014. By international comparison these growth rates are still respectable, but the 2014 growth was less than half of the long-term growth rate seen only two years before. In 2015 Russia’s economy contracted by at least 4%; the final figure is not yet available. Our preliminary figure for growth in tissue consumption for 2015 is 3.2%, still on the positive side despite the poor economy.

Slower tissue consumption growth is not the only consequence from the Russian political and economic developments. Russia used to import significant amounts of tissue from other European countries, but new domestic capacity and a substantial devaluation of the Russian currency has curbed imports, particularly from EU countries such as Finland (first 11 months of 2015 showed a decline of 73%) and Germany (-46%), as imports from the eurozone countries are now extremely expensive.

Imports from Poland and Ukraine have also declined in the past two years. The conflict between Russia and Ukraine has recently expanded into an economic war with import bans and tariffs for goods by both countries. It is not known to what extent tissue products will be hit by these measures, but most likely the tissue trade between Ukraine and Russia will decline further. In 2015 Ukraine was Russia’s main tissue import source, accounting for nearly one-quarter of total imports.

Russian net imports of tissue disappeared totally in 2015, and from the zero trade balance in 2015 Russia may develop into a small net exporter in 2016. New capacity has recently started up in the country, causing some overcapacity and forcing mills to make an effort to increase exports as the domestic market is depressed by the recession. 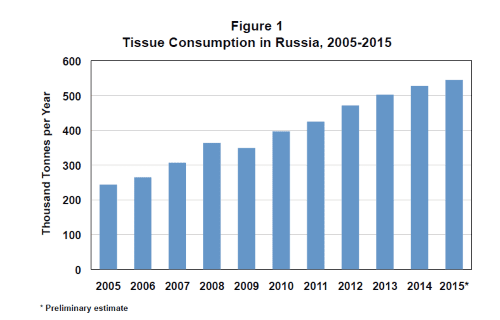 Another influence of the worsened economy and reduced purchasing power has been that the rapid move toward higher quality products that had been ongoing in the Russian tissue market in the past five to ten years has practically stopped, and some consumers have reportedly returned to lower quality products for price reasons.

This development has prolonged the life of non-branded tissue products, which are sold by the length of the roll or as no-name products. It appears that the premium brands have suffered less from downgrading than the second- and third-tier brands. In addition, private label offerings have increased and even smaller chains have wanted to launch their own retailer label, with prices typically at least 15-20% below branded products.

The reports on the true nationwide share are surprisingly different, most probably due to the fact that the coverage of the measurements varies. Large federal and regional chains have a substantially higher private label share than smaller regional retailers, and the traditional kiosk and corner shop businesses have practically no private label participation. Based on various reports, we believe that in 2015 the true share of the total Russian business was still somewhat below 20%, although growth has been rapid in recent years.

Russia has recently attracted quite a few investments in new tissue capacity. The peak of this investment wave was in 2014, with new capacity totalling 160,000 tonnes annually, including STG’s new Semibratovo PM and two large PMs from SCA and Hayat Kimya. These projects increased Russian tissue capacity by one-third within a single year!

In addition, the long-delayed Pulp Invest project (27,000 tonnes) in Kazan was completed in 2015 and Syassky is in the process of replacing its PM3 with a net capacity change of about 20,000 tonnes which will be completed later this year. This means that there is now overcapacity in the Russian tissue industry. This may be the reason that the announced large greenfield tissue mill project by Arkhbum Tissue Group is reportedly currently on hold and the smaller project by Wolma/Paper Recycling seems to have been postponed for an indefinite period of time if not totally cancelled.

The current Russian market outlook is characterised by overcapacity and slowing demand growth, but in the longer term, Russia, with its low per capita consumption (less than 4 kg), will continue to offer potential for tissue producers. Reportedly some new investments are planned by the main players, but the current economic situation may delay them.

For new players, such as Hayat Kimya and Pulp Invest, entry into the Russian tissue market has been and will continue to be challenging.