In October, Södra was awarded the “Best Sustainable Project/Social Category” at the Sofidel Suppliers Sustainability Award. The award acknowledged the pulp supplier’s “Act of a hero” marketing campaign, which encourages the conscious consumption of products that originate from sustainable forest. Here, Södra elaborates on the reasons for its launch. A TWM report.

The industry has made remarkable  progress in environmental protection and long-term sustainability, but not always in communicating that fact. Södra Cell has now geared up its marketing of a pulp success story, and claims to be correcting misconceptions.

A few years ago, Magnus Björkman, the president of Södra Cell International, stated that despite remarkable progress in its environmental protection and the sustainable nature of forest products, the industry was still “a lamentably long way from communicating its story to the public”.

He urged the industry to work together to challenge misconceptions and redress the balance. While companies within the sector are working at making themselves and their purchases originate from sustainable sources, he claimed that the industry’s customers are still not aware of their efforts.

“Customers are still on the receiving end of pleas urging them not to print an email and save a tree,” says Marcus Hellberg, Södra’s sales director for Italy. “Where is the counter-argument and how can we communicate it in a meaningful way?”

He added that it’s not enough in the current market just to collect the correct eco-labels as an assurance that everyone recognises you as a sustainable company: “We all need to sing from the same hymn sheet on sustainability, to communicate the fact that products from sustainably-managed forests are a good thing for the consumer and for the environment.”

According to Hellberg, the company’s current marketing campaign – Act of a hero – targets further down the chain and aims to educate customers of the efforts being made by the industry.

“This is a pioneering campaign; to our knowledge, no pulp supplier has worked this way before. The result? Over 1.6m impressions in a few months.”

The campaign used a tongue-in–cheek theme designed to capture attention while delivering a serious message: that consumers of paper from sustainably-managed forests are actually heroes, regardless of whose pulp is in the product they use, as long as it’s from a sustainable source.

The challenge was then how to deliverthat beyond Södra’s usual audience.

Major stakeholders further down the value chain were identified and Södra enlisted the help of two of its largest customers to help steer them – both of which are confidential – one in the tissue sector and one in speciality papers.

Their end markets in Europe were then analysed, and the biggest buyers identified.

For the tissue customer, Södra analysed its customers’ markets to identify which countries their customers were most active in. Then they studied the major retailers in each country and identified the top three in each customer market. A handful of retailers were then selected from the top handful of countries and pan-European companies added too to ensure as comprehensive a target market as possible.

Hellberg says: “When we presented the findings to the marketing manager of the tissue customer we collaborated with, she was quite impressed that we were reaching further down the value chain than they do in many cases. The marketing techniques we used were highly sophisticated and ensured our message reached the target audience with an impressive level of precision. “We have had literally hundreds of thousands of hits from our customers’ customers.”

Over 1.6m impressions have been registered so far: around 4,200 unique users were recoded via web traffic to the campaign site, excluding Södra staff. Over 1.4m impressions were generated via social media campaigns using Facebook, LinkedIn, Instagram and Twitter. Viewings of both tissue and office paper videos linked to the campaign were actively viewed over 100,000 times each (i.e. the viewer took action to open the video and watched all or part of it).

Hellberg adds: “Digital technology may prove to be the tool we need to break through the public’s misconceptions. We’ve talked about better communication for decades but now it’s time to act.

“In today’s society, transparency is valuable and valued. We have nothing to hide when it comes to our sustainability record, rather we have a responsibility to communicate our sustainability as well as maintain it and offer our customers clear benefits.”

He adds for example, one of the company’s internal sustainability targets is to eliminate fossil fuels across all its operations:

“But if that change were to add to the customers’ costs without any direct benefit, they are unlikely to be too enthusiastic,” he says.

“However, if we can produce fossil-free fuels for transporting their pulp which lightens the customers’ own carbon footprint, our sustainability becomes immediately more relevant.”

Fibre Safe is another example: “A baling strap to replace wire strapping, which is fully recyclable and can simply be thrown into the pulper with the bale – sustainable and convenient for the customer, as well as being a considerably safer option for the operator, especially in the case of manual dewiring, where there’s always a chance a bale wire may snap and ping back, risking injury.” 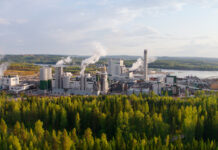 ‘We are at a very dynamic moment in the tissue industry’