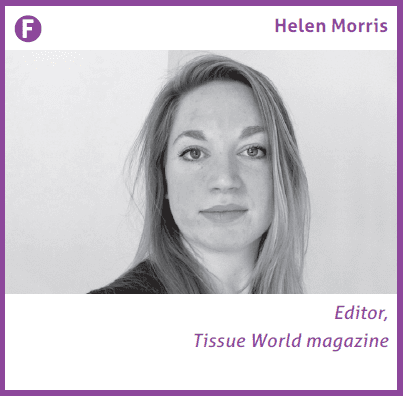 In no other country is so great a potential so apparently locked out of reach. India has untapped retail tissue growth estimated at US$12 billion, 4.5 million tonnes. A population of 1.3 billion is expected to overtake China’s in less than 20 years. One of Asia’s fastest growing economies where real GDP is expected to increase by 7.3% this year. Joblessness is as low as 4.8% while disposable income is set to increase by 6.5% annually … until 2030.

The question for tissue is how quickly some of that potential can be unlocked? Most indicators suggest later rather than sooner and India remains a land of remarkable contrasts.

What tissue use growth there is happens mostly in AfH as more affluent Indians travel and enjoy the benefits of a developing social mix of experiences.

Almost half the population live below the poverty line (US$3.10 a day), compared to 18% in China. Average middle class disposable income is half that of China, and adult literacy rates, while on the rise, still fall behind a number of other developing markets in the Asia Pacific region.

Crucially also, the essential enabler of efficient transport infrastructures is not in place. Much work needs to be done, but there is optimism, as ever, on the tissue front line.

At the Kolkata HQ of Orient Paper there is a real sense of a company poised and ready. Paper division chief advisor R.C Mall acknowledges that when the company integrated “people thought we were mad to be investing in tissue”. Now, FSC and ISO 14001-certified, it’s paying dividends. Tissue market growth in India, TWM’s Country Report, is estimated at 15- 20% each year. Second and third grade tissue is growing at 6% year-on-year. AfH and the diaper market are growing.

All, says Mall, in tandem with “environmental awareness, hygienic needs, improvement in the levels of education and improvement of disposable income with the masses”.

And crucially, the younger generation’s habits and opinions are changing. The big question is how quickly?

Tissue World Istanbul does the business

More than 1,600 unique attendees from across 65 countries were present at Tissue World Istanbul 2016; the first dedicated tissue exhibition and conference for the Middle East, Central Asia, Africa, Eastern Europe, Russia and the CIS tissue industry.

The facts, figures and features of Tissue World Istanbul speak for themselves … a resounding success. A success which we hope to repeat in Istanbul, and at all the other Tissue World trade show and conference locations in our growing portfolio across the world of tissue.

We have a comprehensive report from Istanbul in this edition’s MarketIssues.

Our formidable army of professionals has geared up to meet unprecedented...