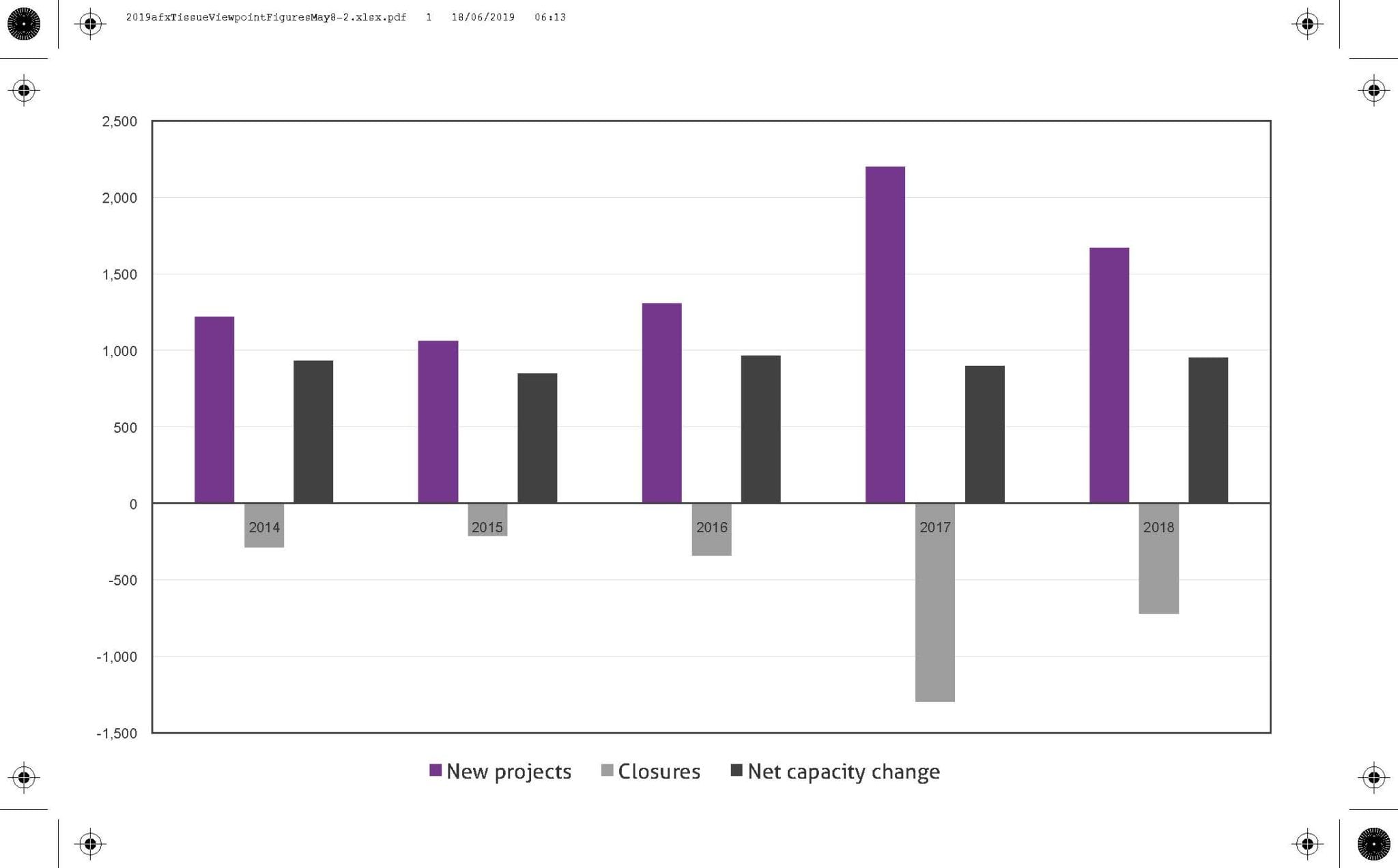 Tissue’s strong upswing was broken in 2018. Much now depends on the economy and consumer expenditures recovering from external and internal pressures. Report by Esko Uutela, principal, tissue, Fastmarkets RISI.

For years, the Chinese tissue market has been in a very strong upswing, with new peaks in consumption and production being recorded each year. The growth in tissue consumption has recently exceeded GDP growth, but the very latest information from the China Household Paper Industry Association (CNHPIA) suggests that this trend was broken in 2018, and tissue consumption remained below economic growth.

In our opinion, the 4.5% consumption growth for 2018, published by CNHPIA in late April, sounds rather low – our forecast for 2018 was almost 6.8% growth. But it could be a reflection of high market pulp prices that negatively affected the profitability of the business and the suddenly poor consumption mentality in China in the last few months of 2018, which influenced all shopping and reduced retail growth radically from the earlier high growth figures in annual comparison. This attitude likely hit consumer tissue purchases in China as well, and the result was a low annual growth rate.

CNHPIA collects both sales and output volumes from Chinese tissue companies on an annual basis. Consumption is calculated as sales volume plus imports minus exports, while we globally employ the formula of tissue base paper production plus imports and exports, including both parent rolls and converted products.

We use slightly different foreign trade figures than CNHPIA, and although the base is the same (i.e., customs statistics), for some reason CNHPIA excludes the medical and other tissue category (48.18.90) from its trade figures, whereas we include it, so there is some difference. Our export figure in particular is substantially higher for this reason.

The other tissue category includes tissue specialties and converted tissue products not otherwise specified, as well as narrow tissue parent rolls used for converting facial tissue or napkins. We use this practice worldwide and make no exception for China. Chinese exports in this category have grown, particularly to the USA. One reason for this may be that the 10% import duty that President Trump raised for Chinese tissue goods is not applied to this category. In the event that the duty jumps to 25%, as recently threatened, even more tissue goods may be traded in this category.

Compared to the 8.1% consumption growth measured in 2017, this figure is quite poor. However, that raises the question – did growth radically collapse or are the CNHPIA figures too conservative? And if the latter, will CNHPIA revise its figures at a later date?

There are also indications other than the low growth in tissue consumption that the Chinese tissue market is in a slowing mode.

Investment activity seems to be getting quieter in the Chinese tissue industry. During the CIDPEX exhibition, discussions with numerous suppliers, both foreign and domestic machinery makers, confirmed this opinion as well.

The current uncertain situation in the Chinese economy and potential further negative outcomes from the trade war with the USA are dark clouds on the horizon. Tissue is suffering in part from this situation.

In the first three months of 2019, Chinese tissue exports decreased by about 4% compared to the first quarter of 2018, and exports to the USA plummeted almost 26%. Exports have helped several Chinese tissue suppliers to expand their business, but this year the growth trend in exports may break.

The outlook has changed somewhat, but by how much is the main question at the moment. CNHPIA forecasts 5.1% growth in tissue consumption for this year and 4.8% for 2020. In the past, CNHPIA projections have regularly been rather conservative, so future growth may be slightly higher, although they will still be slower than the high rates of 10% per year or more that were reached just a few years ago. Much depends on how the Chinese economy and consumer expenditures recover from the current external and internal pressures.