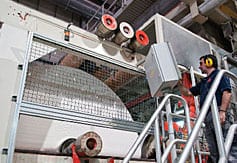 Green ambition, niche products and export potential hold the key to not just surviving but thriving through Spain’s economic crisis at LC Paper.

“You don’t often see a mill with a philosophy – in 2020 there will be far more consumers than raw materials to supply them so we are preparing for this eventuality.”

Joan Vila, the director general of independent tissue manufacturer LC Paper, meets me at Girona station in an electric car. “It’s fantastic,” he says. “The Opel Ampera plug-in hybrid is a real pleasure to use and it’s also far better for the environment. It is the future.” As we travel to the plant just

on the outskirts of Besalú, Vila enthuses about how his passion for all things sustainable isn’t just evident in his choice of car: environmental sustainability has become the philosophy of the company’s tissue production.

As we arrive at the site, he plugs the car’s cable into the socket to be charged. The mill is in an awe-inspiring location – the snow-capped Pyrenees mountain range forms its backdrop, Besalú and its 12th-Century Romanesque bridge is in throwing distance, and the Mediterranean sea is just 30 miles away. In April and May, it’s possible to go skiing and swim in the sea in the same day, something which Vila adds is “very good for the mind”.

“Where we are located, it’s just as easy for us to sell into France where there is a lot of demand but not enough capacity.”

LC Paper has a well established history in the area. It was formed in 1881 on the back of the Industrial Revolution and is now well regarded for its production of niche tissue products and its ability to be flexible and innovative. The site is well contained with two tissue machines annually producing 40,000 tonnes of tissue for the AfH market. Vila says in this sector it’s difficult to go up against the big players in the market, of which there are many. “Our way to differentiate ourselves has always been through being innovative,” he says. “We needed to develop converting technology and new patterns, and so we invested substantially. We believe as a business that we must be 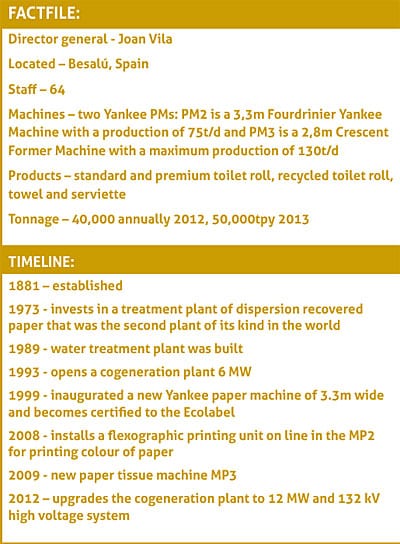 environmentally friendly but also cost effective. To sum up, we want to be the best in terms of productivity.”

There have been substantial investments made over the years. In 1999, a new Fourdrinier Yankee machine (PM2) purchased. “Before this machine, we had no creping, so it was a big leap forward for us in terms of innovation.” In 2009, a new tissue paper machine (PM3) was installed to manufacture hygiene products and medical products for the AfH market. The PM3 takes gases from a gas engine of the CHP to send them to the hood of the machine, and the gases then pass through a boiler, then an economiser, followed by a heat exchanger and finally through a second low pressure boiler. Most recently some €3.4m was spent on purchasing a 6 MW gas engine and a 132 kV high voltage system. In 2013 there are plans to upgrade the fourdrinier machine (PM2) and in 2014 they expect to become partially integrated with the new heavy tissue grades.

The company has also trialed various coatings and now uses four different types. “One of our strengths is that we’re very flexible in our ability to change the coating for the product,” he says. “We have experimented with different fibre compositions and chemicals and now we can get the same softness with heavy 1ply as we can with 2ply, maybe even better. And this is just one of the steps in our philosophy that ensures we are more sustainable in the products that we consume.”

The other big investment has been aimed at sustainability. The company is EcoLabel certified, and has one of the lowest carbon footprints in the market according to Vila. “That’s our aim, to be sustainable and environmentally friendly. It’s a saving opportunity, but it’s become an integral part of our business. Also, selling excess electricity is a business here and it permits us to get enough money for future investments.” Recycled materials are now solely used on PM2 to produce 100% recycled tissue paper, and the company has invested in experimenting with heavy 1ply tissue products. “You don’t often see a mill with a philosophy,” Vila says. “But ours is simple. In 2020, there will be far more consumers than there will be raw materials to supply them. That is a simple fact and we are preparing for this eventuality.”

Vila joined the company 100 years after it was established and Spain’s current economic downturn is his third crisis. “People are not spending at such a high level any more,” he says. “They are prioritising food, air and water. It’s survival only for many people.” As of September, there was an increase in VAT across the country that has considerably affected consumption across all market areas. Family consumption generally fell 13% in September, and Vila adds that this could have an effect on tissue consumption. While external tourism is still a booming business, internal tourism is decreasing, which along with taxation, hospitals, and airports is all impacting on the AfH market. Additionally, there is overcapacity in the tissue market: in 2003, 300,000 tonnes of tissue were produced in Spain and in 2011 it was 700,000. 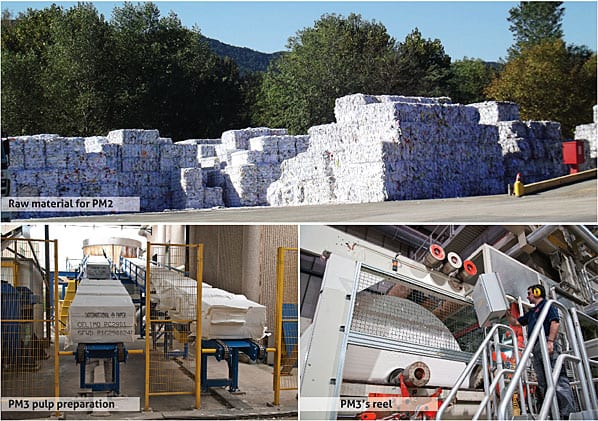 This has drastically affected Spain’s internal market. However, Vila adds that Spain is very competitive in its external market, “and this is very important”. He says: “We are now exporting into central America, USA, South Africa, Tunisia, Morocco, Australia and Germany. Our natural market is France. So some 35% is now going to Spain, 25% goes elsewhere and the rest goes to France.” He adds that because of the economic conditions in Spain, people’s priorities are changing. “But where we are located, it’s just as easy for us to sell into France where there is a lot of demand but not enough capacity.” He says that in the south of Spain there is very little paper making, an impact he says of “Catalonia and Spain’s history and industrialisation”. 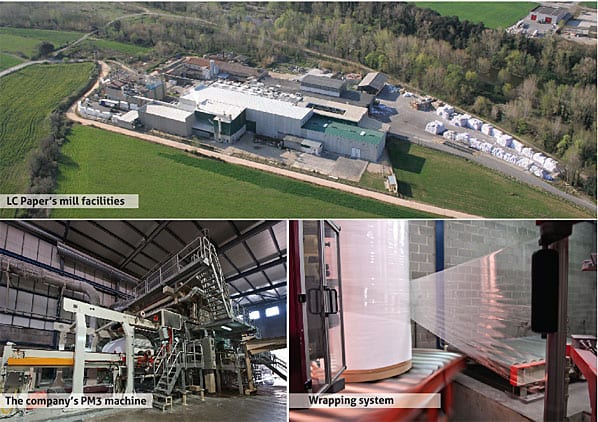 “Some of the mills in Spain are in trouble, it’s very difficult for them to compete,” he says. “In the next few months we will also see how the purchase of Georgia-Pacific’s European tissue operations by SCA will change the market. It’s difficult to understand how it will change things, but this decision could be the future of tissue in Spain. It’s very important for the tissue market. For the other tissue mills here, it depends on whether they can export or not, because many of them can’t.”

This is Joan Vila’s third economic crisis: “People are not spending at such a high level. They are prioritising food, air and water. It’s survival only for many.”

For Spanish business, in 2009 there were severe problems getting credit, and for LC Paper this meant that they couldn’t get enough pulp in 2010. Two years later, it’s back to normal capacity. “We chose to use that time to produce new products, and we now only produce niche products and innovate. We are flexible and that makes us different from the rest, we can be more selective about who we chose to do business with.” For the immediate future, the company needs to grow if it is going to reach its targets. The next investment will see the upgrade of PM2 to 40,000tpy while developing new technology to achieve a very low energy consumption. The business will also continue to develop new products. In 2014, it is considering starting up a converting line for the away market, and possibly also the home market.

“But our aim is not to produce all products,” Vila adds. “If we did, we would not be the best, it’s the wrong fit for us. Our aim is to continue to be environmentally sustainable and to serve our niche market area exceptionally well. That’s the philosophy of 1ply – it has a lower cost in terms of raw material, tissue making, converting and energy, but we can still guarantee the softness and quality. That’s why we’re sure we’re on the right track. We currently have 64 staff producing 40,000 tonnes per year, and the aim is to have 75 staff producing 75,000 per year. This will fit the consumer crisis, and it’s this type of productivity that’s the future.”

What does China’s Belt & Road master plan mean for tissue?