After the acquisition of Georgia-Pacific’s tissue business in Europe strengthened SCA in Spain, TW visits the company’s Valls plant to find out what’s next on the horizon

When TW visits SCA’s Valls plant to meet site manager Toni Mata, the dust from the company’s acquisition of Georgia- Pacific’s (G-P) European tissue business is still settling. G-P exited the European tissue market at the end of 2011 with SCA completing the acquisition of its portfolio, including its Spanish-based Allo, Canary Island, Sant Joan Despí and Carmona sites, on 19 July 2012. The move gave SCA an extra share of the Spanish market, making its total market presence almost a third. Spain is already SCA’s seventh largest market in terms of sales, and over the coming months the acquisition will undoubtedly change the face of its tissue industry.
The impressive Valls site is a key player for SCA in Spain. An hour and a half’s drive south-west of Barcelona, its presence is felt as soon as you leave the picturesque streets of the Roman town of Tarragona. It is set by itself on the outskirts of the

It was established in 1951 as a family business and acquired by SCA in 1998 when the business identified potential in the Spanish tissue market. “We saw a gap in the market for consumer tissue so we’ve concentrated on expanding here ever since,” Mata says. “It’s a strategic site that has followed the evolution of the market and seen us move into the Awayfrom- Home (AfH) sector.”

In addition to the G-P sites, the company’s acquisition activity has also been strong over the years. In 2006 it acquired tissue converting company Mapacasa on the Canary Islands, and in 2007 it expanded its tissue converting capacity in Valls.

“AfH is going to be very interesting in the long-term,” Mata says. “Of course at the moment the sector is very much impacted by the economic downturn, but we are performing better than average. There is low growth generally in the Spanish AfH market nevertheless SCA is having a positive development.” As for the consumer sector, he says the company has a very strong relationship with its partners, which include heavyweight clients such as Mercadona, Eroski and some international clients such as Aldi. SCA is an intersupplier of Mercadona and the exclusive supplier of Eroski. “Volumes of consumer tissue are by far the highest in the Valls By Helen Morris, Tissue World Editor SCA factory. We have and continue to see good evolution of volumes,” he adds. “The situation of tissue products has been complicated because of the increase in VAT in Spain. It’s meant that in September there was a lot of stagnation, but the tissue market here is still growing, although recently with slightly lower momentum.”

He says the drivers during the economic downturn are cost and quality. “It’s all about cost now and we have definitely seen an increase in demand for quality, despite the recession. We strive to cater for the expected level of strength and softness, so the question is about the quality/cost relationship. Our strategy is to offer the best compromise between both.” During 2010, the Spanish tissue market as with many markets experienced increases in raw material prices such as energy and pulp. “It’s more or less stable now, with small variations,” Mata says.

Mata adds: “We are aiming to grow with our customers by constantly increasing our engagement and collaboration with them, and providing a product portfolio which answers the increasing quality demands of our consumers.”

Mata adds: “We are aiming to grow with our customers by constantly increasing our engagement and collaboration with them, and providing a product portfolio which answers the increasing quality demands of our consumers.” In July 2012, SCA closed the acquisition of Georgia-Pacific’s European tissue business. Mata says the integration is a very important step towards becoming a leading global hygiene and forest products company. “The acquisition represents a very good strategic fit as it strengthens our product offering and broadens our geographical reach. Integrating the former GP business into ours is the top priority for all of us at the moment. This is why we will take the time required to do so in the best way. SCA is constantly looking into further developing our products and services in our field. And despite the economic downturn,
sustainability continues to be a priority for us and our consumers. People here want to be environmentally sound.”

Within SCA, Mata says the company is “proud to continuously improve our practices and increase our efficiency. And this is something our customers and the environment can definitely benefit from.” 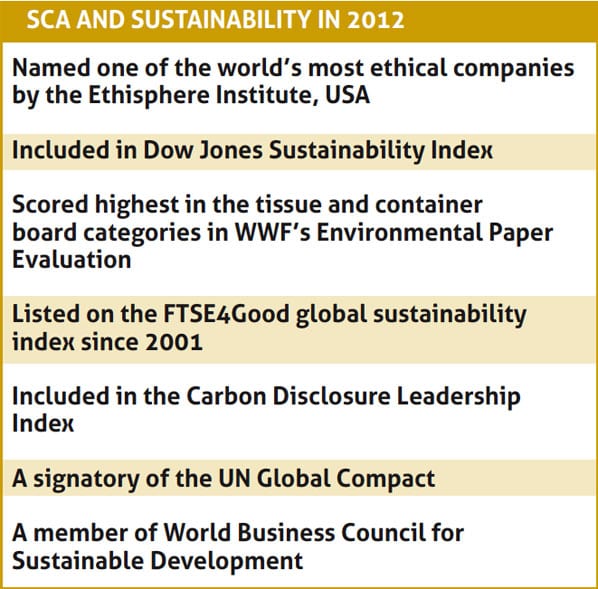